arch of armaments and charts 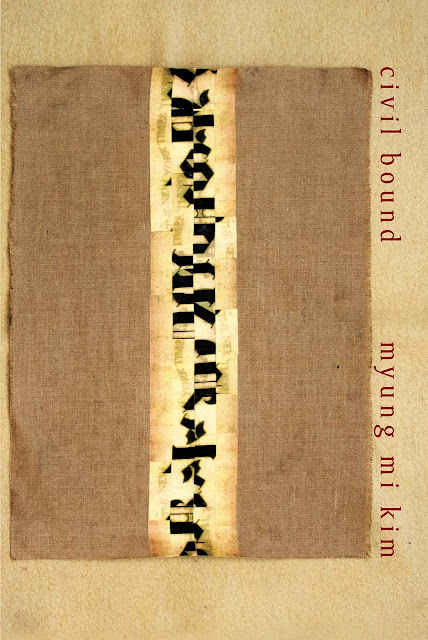 I’ve long been aware of the work of Myung Mi Kim, but the first book of hers I’ve properly gone through is her latest, Civil Bound (Oakland CA: Omnidawn, 2019), a title that follows her Under Flag (Kelsey St. Press, 1991), The Bounty (Chax Press, 1996), DURA (Sun and Moon, 1999), Commons (Berkeley: University of California Press, 2002) and Penury (Omnidawn Publishing, 2009). As the press release for the book informs: “In Civil Bound, Myung Mi Kim turns a keen ear to language as the mechanism by which society operates. The poems engage multiple methods to make sense of this pervasive tool, its powers, nuances, and influences over the structure of our civilizations. Through investigations of ecology, capitalism, military powers, colonialization, and supremacy, the book uncovers patterns in the ways that language is active in perpetuating inequality and binding its subjects to the will of those in positions of authority. In questioning systems of oppression, the poems also offer the hope of forging new paths through the connecting power of language.”

There is something quite striking in the sequence of untitled sequences presented here, each composed as a suite of accumulative, precisely dense and halting lyric fragments and phrases. She composes what could be argued as a book-length line as singular points on an expansive grid, articulating and gesturing towards both physical space and duration, and accumulating against empty space into something both large and incredibly small, detailed and complex. The effect is striking, even if a bit disorienting, as she writes: “arbitrariness intermittence with which the gates to the safety zone open votg / […] / tanktainer hoyer evergreen itawa ttx triton k-line phosphorous intersexed / […] / species vestigial faces on stone pillars pig iron head wounds slick [.]” Her lines explore and interrogate speech, write out a myriad of definitions, and accumulate lines and phrases via collision, how one word plays off another. How do, as her poems offer, syllables of speech end up creating or perpetuating whole universes?