I was curious to see the latest by New Orleans poet Mark Yakich [see my review of one of his earlier titles here], the poetry collection Spiritual Exercises (Penguin, 2019). The poems in Spiritual Exercises articulate quiet meditations on family and faith, on spiritual and domestic matters, consciousness, death and loss, and a multitude of voices, from the “Love Poem to Ex-Husband” to “Parenting from Chicago to Abu Dhabi” to the “Love Poem to Ex-Wife” that begins:

Everyone has a story
He’s tired of telling.

For example,
A child dies and

It’s as natural
As a flower blooming.

And a plane crash is,
As you once said,

Than a bouquet
Of fresh-cut flowers. 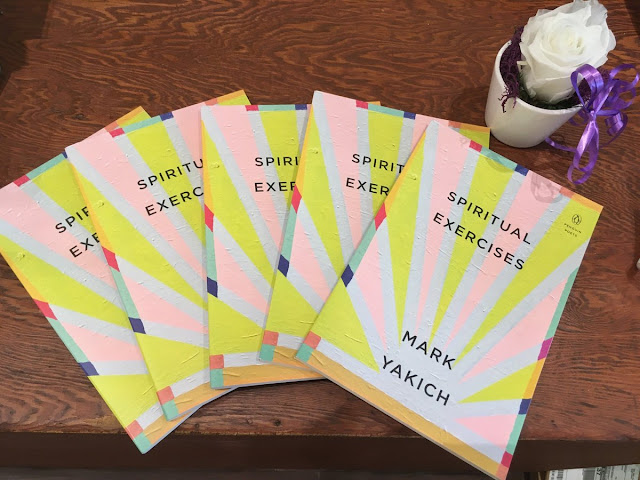 This is a collection of poems that appear to be centred on voice, working a myriad of narrators and perspectives, including a myriad of mental illness, exes, and those lost in or out of their faith, including a poem around squirrels and psychiatric visits that references Thoreau’s journals, “Seasonal Affective Disorder,” a poem that ends: “But to hell with pills. Friends, / Send down your scat and acorns // On my head. I can take the gravity after all— / Without it, the tears might never fall.” I’m fascinated by the movement of these poems, striking out in multiple directions and voices, some of which are more effective than others, all of which seek out a deeper meaning, and a series of deeper connections, to body and faith. Some distances are impossible to reach, but the reach itself becomes the important thing, it is said; such as the end of the poem “Son of a Nun,” that writes:

If I want to bring her back, I just have to
Put two fingers to my wrist
And face the heartbeats. I prefer
Hands at my throat, scratching carefully
And hard as one does a lottery card.

Posted by rob mclennan at 8:31 AM
Labels: Mark Yakich, Penguin