neither a smile’s similitude, nor the kraken’s
coarse sand sister—no one weathers her

her density is a ballad,
a ball, a pallor of hands

inspired limpets descend through the black,
through the happenstance of atoms.

unload the shadows,
denude the crystals.

Toronto writer and filmmaker Sean Braune describes his full-length debut, Dendrite Balconies (Calgary AB: University of Calgary Press, 2019) as an exercise in working through, as he writes in his afterword, “on how a writer might interact with the overwhelming amount of text in the world.” Referencing his discovery and exploration of the work of Hannah Weiner, he writes:

Through this storm of language I find myself compelled to trace a path, and in the tracing of this path there is a reading that leads to a new writing—a writing that very much reflects the cityscape, or the global, interconnected world from which this writing emerges. 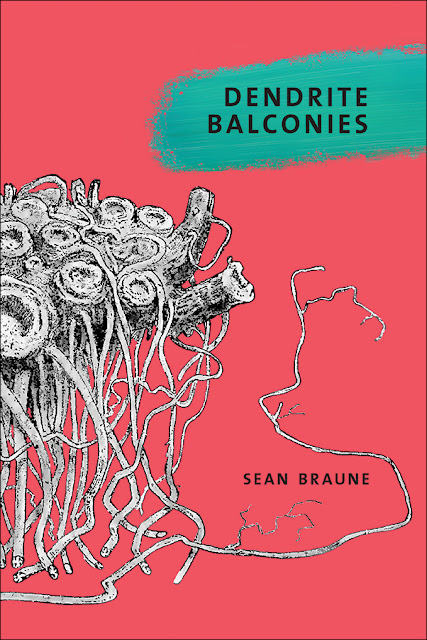 I’m fascinated by his description of writing as “tracing a path,” and his description suggests his poems as a mode of exploration and thinking, akin to works by Anne Carson, Phil Hall or Dionne Brand, but through a gaze that includes an exploration of language, setting his work closer to that of works by Erín Moure or Christopher Dewdney (who provided a blurb for the back cover). “words feel, / words meander, / words glacial know words / in word dilation,” he writes, in the fifth section of the section/sequence “Water Dreams.” Set in nine sequence-sections—“Faciality,” “Chiasmus Planet,” “The Unmixed Skin Void,” “Water Dreams,” “A Corpus Emptiness,” “Vitalogistics,” “An Organ Dancer,” “A Wet Room Geogrpahy” and “Face Ache”—as well as an afterword, “Vibrational Harvest,” Braune’s Dendrite Balconies explores how writing reacts to writing, how language relates to being, how thinking shapes perception, and how perception shapes how one relates to and exists in the world.

Writing out his book-length sequence of sequences, each extended poem in Dendrite Balconies exists as both lyric accumulation and linear thread. As Braune responded as part of a 2018 interview at Touch the Donkey, he wrote that the current collection, then still a work-in-progress, “is a collection that explores the frenzy of contemporary reading practices (as discussed earlier), as well as the inevitability of death alongside the ways that language can be understood as an infection.” He also spoke of actively resisting composing “a poetry that fully embraces meaning.” He continues: “I think that poetry should always push against the meaningful structures of language in order to add some ‘disquiet’ or ‘disorientation’ to traditional practices of writing and reading. For me, poetry is an activity that is produced by reading.” For Braune, his balconies sit as an extension of another’s building, deliberately seeking to further what had come before, seeking to absorb as much as possible and push at the limits of language and meaning, yet in a way that still actively explores those same meanings. I am curious if there is any kind of lineage or linkage between this work and Fred Wah’s own, given his sequence, “This Dendrite Map / Mother/Father Haibun,” from his Governor General’s Award-winning collection Waiting for Saskatchewan (Winnipeg MB: Turnstone Press, 1985), the first poem of which, “Father/Mother Haibun #1,” included: “such  particles  caught  in  the  twig-jam  holding  the / water back impedimenta and this dendrite map I’m finally on now for / no reason but time [.]” After a small handful of chapbooks (three of which appeared through above/ground press), I am eager to see where Braune will go next with his work, and just how he might apply some of the lessons learned through the process of this debut collection. To end his afterword, “Vibrational Harvest,” he writes:

It is an attempt to create, in a nonlinear fashion, poetry out of the hurricane of words that I am exposed to. It is also, to a certain extent, a desperate attempt to find meaning in this bluster, especially in a twenty-first century western culture that appears to be heading, rather rapidly, towards its own demise by way of climate change and the resulting dwindling resources, all while the volume of text continues to swell.
For this reason, Dendrite Balconies may appear to have experimental qualities, but I think of it as a desperate attempt to reaffirm a lyric impulse in poetry. A poetry that both seeks to differentiate itself from and also still be a part of the vast sea of text which produced it—the libraries, cityscapes, and the texts that have inspired it. A glass of water poured into the sea, perhaps, but a sea made up of many such glasses of water. A glass taken from the sea and now returned to it.