Resistance: An Anthology of Poetry, edited by Nyla Matuk


ONE WAY TO KEEP TRACK OF WHO IS TALKING

If I change one word, I change history. What did I
say today? Do I even remember one word? Writing is
oral tradition. You have to practive the word on
someone before writing it down.

I do not intend to become the world’s greatest Indian
orator. Maybe I might by accident. I might speak my
mind even when running off my mouth like I’m doing.
language finds a tongue. Maybe it will be an Indian
accent.

Counting hostile Indians is made easier because they
don’t talk much or very little. They look the part
—the part in the middle with braids. You never do
know if you are talking to an Indian.

Frozen Indians and frozen conversations predominate.
We mourn the ones at Wounded Knee. Our traditions
buried in one grave. Our frozen circles of silence
do no honour to them. We talk to keep our
conversations from getting too dead. (Marie Annharte Baker) 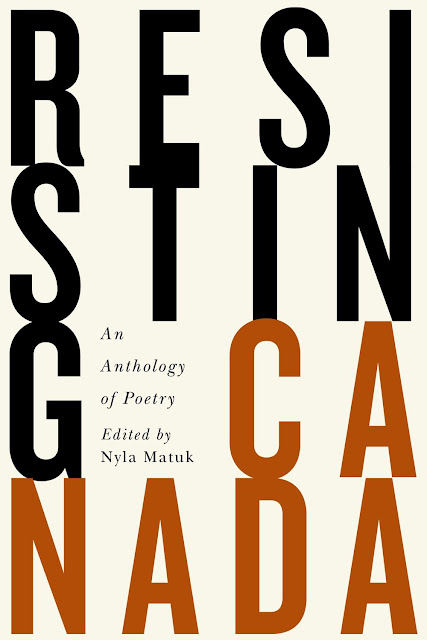 I was curious to see this new anthology edited by Montreal poet Nyla Matuk, Resisting Canada: An Anthology of Poetry (Montreal QC: Signal Editions/Vehicule Press, 2019), a volume of work including contributions by Jordan Abel, Marie Annharte Baker, Billy-Ray Belcourt, Beth Cuthand, Rosanna Deerchild, Marilyn Dumont, Marvin Frances, Louise Bernice Halfe-Sky Dancer, Lee Maracle, Janet Rogers, Armand Garnet Ruffo, Gregory A. Scofield, Leanne Betasamosake Simpson, James Arthur, Wayde Compton, Jim Johnstone, El Jones, Christine Leclerc, Canisia Lubrin, Sachiko Murakami, Arleen Paré, Michael Prior, Shane Rhodes, Ingrid Ruthig, Karen Solie, Moez Surani, Derek Webster and Rita Wong. For the purposes of this book, “resistance” seems concurrently an overly general and remarkably precise descriptor, one that acknowledges a building cultural shift over the past decade or so, and the responses to those shifts, as well as to some of those authors who have been already been doing this kind of work for some time. There has been a growing frustration around cultural issues, with subjects such as Idle No More and #MeToo cohering into flourishing movements, something that has been increasingly reflected in Canadian writing and publishing. Young writers such as Billy-Ray Belcourt and Jordan Abel might only have emerged over the past decade or so, but poets such as Armand Garnet Ruffo, Rita Wong and Marie Annharte Baker have been at the forefront of this kind of work for a very long time, so while some of the larger attentions to such issues and ideas might be more recent, the responses to such have existed for decades.

As Matuk writes as part of her introduction: “The poems in this book question the triumphalist, nation-building narratives typical of Canada’s historiography. As a settler-colony, Canada will only find the road to moral ground once it attempts to understand how and why it sits atop land, cultures, significant landmarks, and memories that do not belong to it, and faces its history of irreversible damage to First Nations Peoples, including its genocidal intent; once the state stops taking for granted that its self-declared presence permits access to unceded lands or entitles it to ignore or transgress the territorial or jurisdictional sovereignty of First Nations.” As she writes:

Writing as a response to politics, I would argue, is a thoroughly postmodern idea: writing that exists as part of the world (and a response to that world) as opposed to the modernist suggestion that writing exists separate from the world. We exist in tandem, and one can’t exist without affecting the other. Why should writing be any different? And some of the strongest writing I’ve seen over the past decade or more has been work that exists within the world, from the geopolitical to the social to the flourishing of eco-poetry.

Resisting Canada: An Anthology of Poetry opens with a land acknowledgment (something I’ve been hearing, increasingly, at literary events the past few years, but hadn’t seen in print), and ends with a variety of statements by a handful of the poets, providing context for them and their works. As Vancouver poet Rita Wong’s statement (clearly composed before her jail time) writes:

In August 2018, while BC was in a state of emergency because of wildfires, breaking records for the second year in a row, I sang and sat in ceremony in front of Kinder Morgan’s Westridge marine terminal for half an hour. For this, I was arrested, and face the threat of 28 days in jail for opposing the expansion of the Trans Mountain pipeline. My punishment—while Kinder Morgan gets away with clearcutting trees, poisoning the land, air, and water—shows how Canadian laws are dangerously disconnected from the laws of physics, chemistry, and the land itself.
Where Canadian law is failing to protect us from increasing the likelihood of climate disasters, thankfully we can and are learning from natural law and Indigenous law that we have a reciprocal relationship with the land. We all have a responsibility to care for the land’s health, which is ultimately our health too.
15,000 scientists have issued a warning letter that we need to make a fast transition to renewable energy. Governments aren’t responding fast enough to the peril that we face due to climate destabilization. On a geological scale, we are in imminent peril now.
I am just one of over 200 people who have been arrested because we take climate crisis seriously. We cannot afford to let this black snake pipeline acidify the ocean. We stand in solidarity with the land, the water, the earth, and all the relatives protecting our collective future.

This does feel like an important book, furthering a conversation that has been building for quite some time. And what should I, as a straight, male and white writer be doing in my own work? Listening, certainly. Paying better attention to some of these conversations that might make certain people uncomfortable (and rightly so). Sometimes it is better not to speak, but, instead, to help re-broadcast the thoughts and works of another, from conversations around Omar Khadr, poverty, systematic racism, the Kinder Morgan pipeline, unceded territories and a history of genocide against Indigenous people and communities, colonialism, Canada’s history of slavery and the historic erasure of Black neighbourhoods from Vancouver to Halifax, Japanese internment camps, the list of murdered or missing Indigenous women and girls, and the trauma surrounding the Residential Schools system. We can only move forward (whatever that forward might look like) once these conversations and reconciliations are properly addressed, otherwise we are trapped where we stand.

This is dream city, built on shores
still not ceded. This is a city of tourists
with mouths agape, these are my boundaries:
the islands in the Gulf, the sea they might call Salish,
the land taken there, taken again
from another family, that line nearly faltered.
and now a nephew with my father’s grin, the last one.
Between the people and the land, what have I to teach?
to tolerate suburbs? To let the land be covered
with another’s vision, then stretch our line out farther than the
commuter trains,
stop where the valley’s silt turns hills, the residents nearly Albertans.
The time is now, and now, and now; built so fast with minds
less changed, from Expo to Olympics,
a lifetime. More than his. Most of mine. (Sachiko Murakami)

I’ve heard recently (given the combination of federal election and thanksgiving weekend) that politics is something our parents should have taught us not to avoid, but to discuss and inquire about in a respectful, thoughtful manner, far different than a generation or two prior, where politics at the dinner table might have been considered taboo. One hopes that a collection such as this would be taught in schools, both for the writing and the content, to showcase just how much culture is shifting and has already shifted to acknowledge some of these conversations, frustrations and attempts toward reconciliation. Given the volume includes numerous works reprinted from full-length collections, I would suspect that is one of the purposes here. The world is changing. Writing is changing in response. One hopes that enough might be listening.