from your hairs
wanting badly a pillow
your first word

something handheld
with a golden hue fangled and slam (“TREM”) 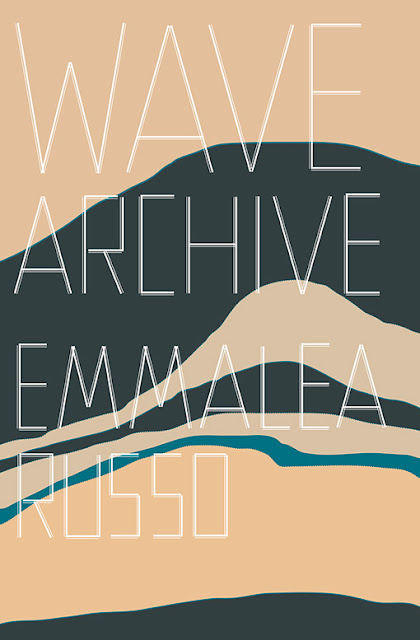 I’m fascinated by New York City poet Emmalea Russo’s latest, her Wave Archive (Toronto ON: Book*hug, 2019), in which, as the back cover offers, “Russo invokes her own experiences with seizures, photographs and art-making, archival and indexical processes, brain waves, and the very personal need to document and store while simultaneously questioning the reliability of memory and language.” Following up on her full-length poetry debut, G (Futurepoem, 2018) [see my review of such here], Russo’s Wave Archive is reminiscent of Vancouver writer Elee Kraljii Gardiner’s recent Trauma Head (Vancouver BC: Anvil Press, 2018) [see my review of such here], a collection that wrote through and around her mini-stroke and the after-effects, as well as Christine McNair’s current work-in-progress exploring preeclampsia, all of which explore health trauma through a language that works to “articulate the incomprehensible” beyond the lyric or the purely descriptive. While Wave Archive might utilize both the lyric and the descriptive, research and the descriptive, the book blends those alongside drawings, photographs, lists and the experiential, pulling apart cognition even as she works to fully explore those cognitive sparks, breaks and fragments. As part of the book’s opening sequence, she writes: “no it’s not exactly swimming but your head is submerged and you’re sure / that this is closer to therapy than therapy as the mind that occupies you / studies only the next wave or perhaps not even that and as a thought / begins to form the next wave // chops it off [.]” Set in thirteen short sections, including an untitled opening, Wave Archive’s pages accumulate and collage their way through lyric, prose, language poetry, graphs, photographs, indexes, lists, observations, responses and out-of-body experiences to attempt to hold her particular understanding of and ongoing experiences with epilepsy; she attempts to both articulate and understand how information is processed, sorted and re-sorted, writing out her thinking as she is thinking it. Moving seamlessly from the finely researched to the experiential, Wave Archive is precisely that, an accumulation of wave upon wave of Emmalea Russo’s thinking, being and responding through her researches upon and experiences around epilepsy. “You’ve cut the word sick, and its synonyms,” she writes, to open the section “TO FORGET THE SELF IS CALLED ENTERING HEAVEN,” “from your vocabulary.” The piece continues:

You skim the index of the book The Falling Sickness and find that you’ve underlined several entries in haphazard maroon marker.

If there is one thing I wouldn’t call you its hemmed in.

An edge
taken
in

A seizure is an event and, as such, can happen whenever.

The neurologist: Your personality, your short-term memory, will start to be impacted. We want you to be with us for at least five more decades.