Jennifer Soong, Near, At


The expected arrival into Miami is as they say “on time.” A contract between belief and assurance makes for an orderly day. But as planes fly low in these regions, she extends her arms to exceed the line, a change in relative speed between two aerial masses; turbulence, its aftermath, its angelic fart tracking the sky. (“Microcosmos”)

New Jersey-born poet Jennifer Soong’s full-length debut is the wonderfully expansive Near, At (New York NY: Futurepoem, 2019), a collection of lyrics that explore structures of philosophy, observation and thinking, articulating a book-length assemblage of poems that attempt to write their way through and into discovery. “To discover the most various / type of love,” she writes, at the opening of the title sequence, “take a circle and stretch it till it bells flat like an oval. To / practice the true length of difficulty, of coming back by way of the / foreshortened, move along not one, but a nation of souls.” I’m fascinated by Soong’s long lines and the long threads, her extended cadences of lyric thought; something evident, as well, in the shorter poems, such as in the sequence “Microcosmos,” as she writes:

In a small bit

as in a moment of
given sky or

as in (she thinks) 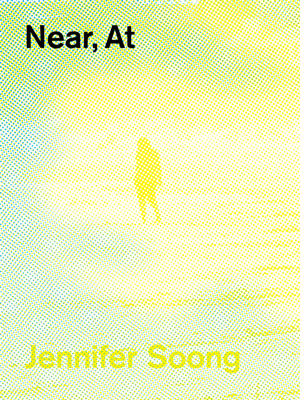 There is something about her work that stretches out the moment between arrival and having arrived, reaching towards and finally reaching, set in the comma within the book’s title. As she writes to close the short poem “The Voyage Nowhere,” writing: “Hovered from above, what do they see, or else, what / am I but semblance, the captain’s parrot, alternating / halfway across the sky between silence and mimicry.”