Gary Barwin, For It Is a PLEASURE and a SURPRISE to Breathe: new & selected POEMS, edited with an Introduction by Alessandro Porco

there’s a girl walking
down the street
carrying an oar

later, another girl
walking down another street
carrying a different oar

like delta and source
the girls have never seen one another

One of the benefits of an increased mainstream attention for Hamilton writer, publisher and composer Gary Barwin’s work, sparked by the publication of the novel Yiddish for Pirates (2016), is seeing the attention spread out to other elements of his incredibly-expansive range of creative works—fiction, poetry, musical composition and performance, visual poetry and collaboration. His latest collection, For It Is a PLEASURE and a SURPRISE to Breathe: new & selected POEMS, edited with an Introduction by Alessandro Porco (Hamilton ON: Wolsak and Wynn, 2019), is a hefty volume nearly two hundred and fifty pages large exploring thirty-five years of Barwin’s publishing, and a volume that can’t help but provide a spotlight on Barwin’s playful, serious writing. The selection bookends with a replication of his first self-published chapbook, produced for a class at York University in 1985, to some twenty-five pages of new and uncollected work, and run through visual works (including a section in full colour), prose poems, longer sequences, short bursts and surreal twists, and more traditional lyric poems. Before we even get to the poems, the volume begins with a forty page introduction by editor Porco that, towards the end, writes:

For It Is a Pleasure and a Surprise to Breathe: New and Selected Poems is a collection of eighty-plus poems – “counter, original, spare, strange,” to borrow from the aforementioned Jesuit priest-poet – that demonstrate Barwin’s nimble commitment, over four decades, to divining and documenting those very “changes of mind” in la(w)nguage and by the way of old and new techniques of writing.
Barwin’s poetry has been published by micro, small and large presses in Canada, the United States and Europe; however, it has also appeared in public and semi-public spaces – the musical stage, gallery walls and city streets – as well as across social media platforms (e.g., Twitter, Instagram and Facebook) and in various formats (e.g., cassette tape, CD and MP3). He identifies with and occupies multiple convergent and divergent artistic, social and geographic communities, including the post-WW II avant-garde, the Toronto small press scene, the literary Niagara region and the Jewish mystical tradition, among many others. Suspicious of Canadian nationalism and its reified forms of literary power, Barwin’s poetry moves and mows between the lyrical and ludic, folk and fabulous, musical and visual, civic and conceptual, verse and prose, and local and diasporic. Barwin recognizes both the ideological force of language and the arbitrariness of the sign, but he also believes – like his mentor bpNichol – that making and sharing poetry, or poetics, is a deeply human and humanist practice. It breathes. Poetry is wildly imperfect, yes, but it aspires, formally and proprioceptively, to be open and present to dialogue with the universe’s smallest and grandest elements. 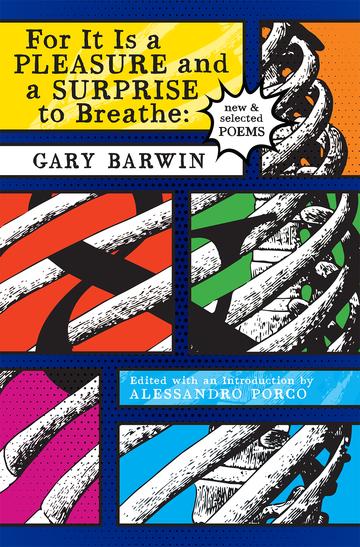 Alessandro Porco provides the sort of thorough introduction that many authors could only dream of, extending his own foray into critical exploration and literary archaeologies (he is also responsible, as editor and critic, for Jerrold Levy and Richard Negro’s Poems by Gerard Legro, Steve Venright’s The Least You Can Do Is Be Magnificent: Selected & New Writings, and Deportment: The Poetry of Alice Burdick [see my review of such here]), writing of Barwin’s engagement with the fabulous, surreal, magical lyric and lyric narrative. Porco also gives the impression that this collection is less an assemblage of Gary Barwin’s “greatest hits” than a volume that explores the movement and expanse of Barwin’s poetry, including some corners of his work that might have been overlooked the first or even second time, providing a portrait of that the author himself might not have been able to shape. Part of what I really do appreciate about this volume is the acknowledgment of the range of Barwin’s interest and attention, which is incredibly broad, even when you consider that the range of his creative interests and engagements exist far beyond the scope of even this incredibly generous volume (novels and short stories, musical composition and performance, and collaborative works). In a review I did of the recent A CEMETERY FOR HOLES, poems by Tom Prime and Gary Barwin (Gordon Hill Press, 2019) [see my review here], I wondered aloud, knowing this volume was forthcoming, if a selected volume of Barwin’s collaborative works might be worth considering, and I suspect Porco might easily be one of the best choices of editor for such a project. Given Barwin already has another novel forthcoming, might some the readers of his fiction be brought along for the ride? For their sake, I certainly hope so.

we have a dog. his name is martin.

he was walking across a field without end, a field the colour of his blonde hair. at one end of the field was a large red house. out of its chimney came puffs of smoke, the shape of dogs. the sun lay low on the horizon and all about him, he heard the arfs of small dogs, calling.

he turned around. at the other end of the field there was also a red house. puppies spilled from its windows onto the soft grass of the lawn. they looked silvery and mysterious by the moon’s pale light. he tried to call them, but his barks fell into the field without sound.

it seemed he had been walking for days, the moon never rising, the sun never sinking, when suddenly he heard a voice, my voice, talking on the phone. i was saying, i think we will call him martin, and yes, we can hardly wait. (“MARTIN’S IDEA”)