how time exposures expose the times

There aren’t that many writers who rework poems after they’ve been published in a book, let alone revisit an entire poetry collection some four decades later, as Vancouver writer Daphne Marlatt has in her Liquidities: Vancouver Poems Then and Now (Vancouver BC: Talonbooks, 2013). Liquidities revisits her poetry collection Vancouver Poems (Toronto ON: Coach House Press, 1972), rewriting a number of the poems in the original collection, as well as adding a healthy amount of new pieces. Although it isn’t unheard of for a writer to revisit certain poems while putting together a selected, I honestly can’t think of another example of an entire collection being updated and/or rewritten. Reissues have happened, certainly, from Gerry Gilbert’s Moby Jane to Peter Van Toorn’s Mountain Tea, but those were rarities in themselves, without a single word altered. Does the poem require an update, in keeping with the city’s evolution? Does inflation impact upon writing? As Marlatt writes in her introduction to the collection, “Then and Now”:

Vancouver Poems was a young woman’s take on a young city as it surfaced to her gaze. Under this new title, Liquidities: Vancouver Poems Then and Now, the poems remain verbal snapshots, running associations that sound locales and their passers-through within a shifting context of remembered history, terrain, and sensory experience. Rereading the early poems with a current ear and eye of course led me to re-vision them, in some cases substantially so, in others less so. Picking up a pencil to alter some early orthographic habits like “&” and “thru” let to line lengthening, which sometimes affected their visual and verbal rhythm. Rereading the poems in 2012, I see I had already learned something back then from West Coast aboriginal art—the way forms emerge out of and appear within other forms. The syntax of these poems similarly forms and transforms, merging images in an ongoing flow. This rereading also led to a few changes in diction and, in some of those early poems, lengthier additions or deletions. Not all of the poems from the original edition are included here, only those I felt still had something to say about the city as it was when the 1960s were becoming those heady days of the 1970s.

As it was then: a town outgrowing its wooden houses, Edwardian temple banks and fog, a muggy harbor of shipping, a young city penetrated by water and beginning to register its multiracial, multicultural roots and branches, yet oblivious to First Nations presence both before its own beginning and still active within its boundaries. What might be the shape of such a city’s shite or inhabiting presence, its ghostly energy for self-transformation? In the original Vancouver Poems, I had deleted the Japanese noh theatre word shite (or sh’te, closer to how it’s sounded) from the opening poem, but here the word is restored to its active place. This is the underground import (in both senses), the unconscious question that drives the whole series of poems, then and now.

Vancouver’s incessant deconstruction and reconstruction, its quick transformations both in (re)structured ground and in urban imagining, come further into play in the new series of poems, Liquidities (from liquid assets, cash, and increasingly from the incessant rain of global warming). The slower, more introspective rhythms of the city poems some forty years ago speed up as wordplay, faster image traffic, quicker jumps through milieux and temporal strata that intensify to verbal collisions in the new poems. Forest terrain faintly recalled in high-rise architecture. Wave trains of thought that oscillate between naming and transition. On edge, littoral, surfacing through the litter it leaves, the city’s genius loci wavers in and out of focus through its tidal marks of corporate progress and enduring poverty. Through refacing and defacing. Through the changing faces of a metropolis driven by big name corporate backing, citizens shortchanged in the private rush to make profit at the expense of a faceless public. Yet these poems hear the quiet generosity of trees, the swirl of riptide rush, under all the changing ings and isms, some generative force like that which runs through words to make connection continue. 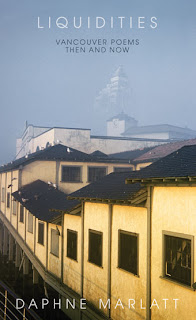 For a city constantly rebuilding, as Marlatt suggests, to revisit her original work made the only sense. When Marlatt was composing the original incarnation of this collection, it was not only part of a wave of small press in Canada, but a wave of exploration of Vancouver through poetry, including Maxine Gadd’s late 1960s “The Hippies of Kitsilano” section of her 1977 selected poems, Lost Language (edited by Marlatt for Coach House Press), and George Bowering’s George, Vancouver (Kitchener ON: Weed/Flower Press, 1970) and later Kerrisdale Elegies (Toronto ON: Coach House Press, 1986; Vancouver BC: Talonbooks, 2008). Before and since, Vancouver has been explored through poetry by dozens of writers [see the piece I wrote on some of it here], including Meredith Quartermain, Stephen Collis, George Stanley, Elizabeth Bachinsky, Michael Turner, Sharon Thesen, Fred Wah, Sachiko Murakami, Oana Avasilichioaei, Roy Kiyooka, Earle Birney, Gerry Gilbert, John Newlove, nikki reimer and Shannon Stewart. What is it about the city that inspires? And yet, Marlatt’s Vancouver Poems was one of the first poetry collections to write so openly, lovingly, critically and unapologetically lyrical about the city, and I would suspect very much influenced a great number of poets in the years that followed, suddenly given permission to write about Vancouver.

mackerel sea-sky (eyes down). Limed
public library steps, the gulls. Mean what they
cry. Time, time. How many stoop to a dead fish?
How would you like a tail in the eye, scales, a
little bit rheumy but other/wise …  Off the point
they go fishing. Under latches of the bridge,
rusty, rattling their rods. Tide. Swirls down
deep there. Noon reigns in the street, a White Lunch.

Blue hubbard figures hump, endless round. The Cup’s
too big to geet into. Would it hold anything but rain?
Steams on a hot day, the park lunches.

Hold my hand in this cracked vinyl booth where
bread wilts. I love you but don’t, fling your rain-
coat over my head. It smells, wet. Hair hangs into
my cup. Love rains. You will go far somewhere.
Where? matter inserts relation.

Peels, heels, float like hulls of hands under the
wharf. Rats dockside. Carrying orchards up, and the
port, and the starred-on-board lights.

Milk run Amalia ends up on library steps, a cigarette,
some soup. A wet day steams up the insides of
their eyes. I want to know how gulls keep flying.

If Barry McKinnon’s poems are described as a single sentence-thought that each rise to an apex and fall away, Marlatt’s poems can be described as single self-contained sentence-breaths that connect perfectly to any of her poems placed before or after; the pattern the reader sees from such comes in part from how the pieces are arranged. There is a restless quality to the poems here, one that make her study of Vancouver not tied to a single temporal point, but a book that stretches across decades. Certainly, Liquidities feels less a straight update of an older work than an extension of the original project, and the lines that open one of the early poems, “Lagoon,” could have been written in either era, and anywhere in between: “down a cut on the city side, apartments / stacked uphill, through shadow and hulls and ribs we walk. / You’ve come home.” For a poet who has always explored the lyric heart, Liquidities reads as a writer’s ongoing relationship to her city, composed as a critical love letter home.