A series of author photos: rob mclennan by Kerr, McInnes and whist, 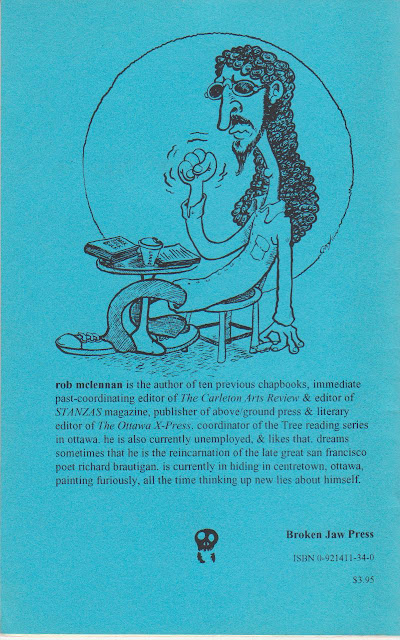 For years, I preferred the idea of cartoon depictions on the back covers of chapbooks and books, as opposed to professionally-done author photos. I spent a long period unhappy with any photographic depictions of myself, and thought that by asking comic artists irregularly to draw me for such would be far more interesting, and make a cool archive down the road. Since the early 1990s, various artists that have drawn or painted me include Greg Kerr, Gavin McInnes, Dave Cooper, Heather Spears, David Cation, Diane Woodward, Tom Fowler [see the amazing "engagement photo" he did for us here] and the artist once known as emily whist (for years, I’ve dreamed of the possibility of an author sketch by Adrian Tomine or Kate Beaton, but so far, nothing yet). There was even a quick sketch once done by the poet George Murray that I used for a chapbook at one point. Here are a couple of examples I’ve discovered, while preparing my archives for the University of Calgary.

I originally met Ottawa artist and musician Greg Kerr through the small self-published comics he sold through Crosstown Traffic, Buncha Stories, immediately reaching out to write a short piece on him for The Charletan, during that period (circa 1993) I was writing regularly for Carleton University’s paper. Kerr drew a number of depictions of me over the years (most of which I’m still digging around my archive for), but he drew this one specifically for my first Broken Jaw Press publication, the chapbook Poems from the Blue Horizon (1994).

The “donut” reference on the coffee cup in the drawing refers to the fact that I wrote for a number of years in a Dunkin’ Donuts on Bank Street, where he used to occasionally visit me (after it closed, the location became a Tim Hortons, currently at the corner of Bank and Gloucester Streets). Without space in my shared house to write, I wrote six days a week, five hours a day in that donut shop (from 10am until 3pm) from roughly May, 1994 (after it opened) to June 2000 (when it closed), and most of my first few published books were composed in that donut shop window. During that period, I wrote poems and reviews in the donut shop, and fiction during occasional evenings at The Royal Oak.

Greg Kerr later on had a comic strip included in the visual art and literary journal I produced in the mid-1990s, Missing Jacket, and above/ground press produced a small comic of his, Drunkboy Stories (May, 1997). For a short time, his strips were included in the Ottawa X-Press, but, despite his loyal legion of Ottawa fans, nothing since. 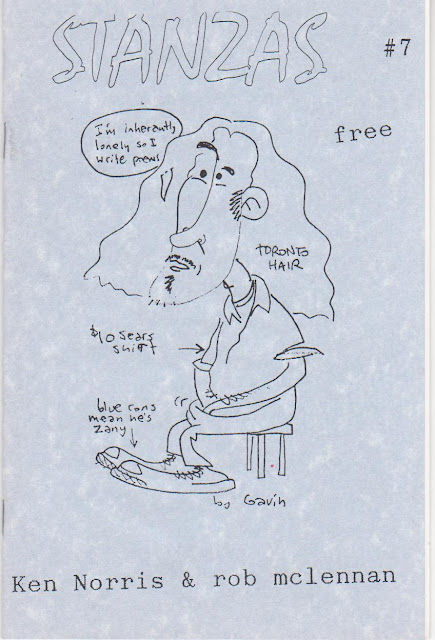 Gavin McInnes sketched this mocking image of me for the seventh issue of STANZAS (above/ground press, November, 1995). The portrait gives the impression he didn’t have high opinions of either myself, poets or Toronto, but he claimed later that it was mockery, and he was shocked that I had actually published the thing. Why not? At that point, McInnes was self-producing a small comic zine he sold through Crosstown Traffic, but hadn’t yet started up at Vice Magazine. He later appeared on at least one panel on Politically Incorrect, and has recently produced a series of strange, short and amazing videos.

For a period after that, McInnes was co-producing a comic strip with Dave Cooper, who still keeps in touch with him. 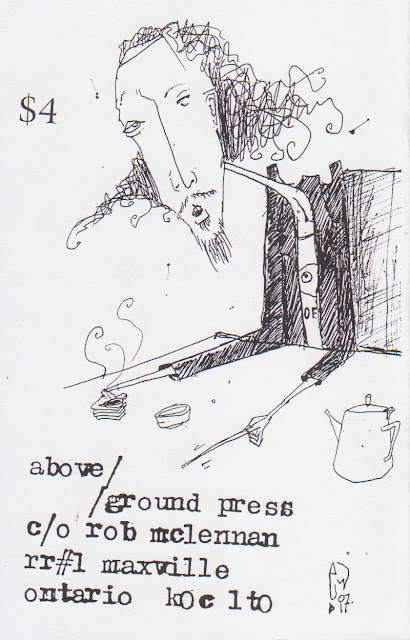 emily whist was the pseudonym of the Ottawa artist Rob Nelms, said to be part of the family that owned and operated Nelms Opticians. I originally saw his artwork in the strangest corners of the University of Ottawa during the period I took a poetry workshop there, the 1992-1993 academic year. He had produced a series of very strange images, put them on stickers, and hid them throughout washrooms, on billboards, and various other locales.

I don’t recall specifically how I ended up meeting him, but this image was drawn on a paper placemat as I sat with Rob and his partner for a couple of minutes around midnight, at a Chinatown restaurant at the corner of Somerset Street West and Bronson Avenue. They were having dinner, and I was slowly making my way home from something, slightly or even somewhat intoxicated (I must have been wearing my "Go Fish" t-shirt that night, produced by another Ottawa artist from that period).

He was another who drew me more than once, and he even gifted a package of artwork I was free to use for various above/ground press chapbooks. I used fragments of his artwork on Natalee Caple’s poetry chapbook, The Appetites of Tiny Hands (Nov 26, 1997), the WHIPlash 2 reader (the anthology of the second annual WHIPlash poetry festival, June 1997) and various issues of the long poem journal STANZAS, including meghan lynch (now Meghan Jackson)’s “inside     first floor         at the randomization factory” (issue #13; June 1997) and ryan fitzpatrick’s “further revisions” (issue #25; July 2001).

He had large-scale paintings that once hung in galleries all over Ottawa, and he and his partner were the core of the most amazing noise-band, The Kittenling Foundation, who once performed as part of the second annual WHIPlash poetry festival in 1997. Their performance included a Theremin, singing, noise and a toaster. Stories of what happened to him after that vary, and are mostly unverified. Needless to say he was damned talented, incredibly strange, well-liked, and, bafflingly, simply disappeared.
Posted by rob mclennan at 9:01 AM
Labels: above/ground press, Broken Jaw Press, comics, emily whist, Gavin McInnes, Greg Kerr, rob mclennan photo