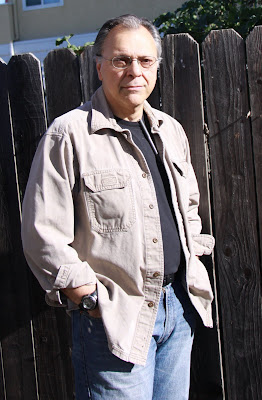 Howard Victor Chaykin has been a comic book professional for over forty years.  forty years.  Think about it.  He took a hiatus from the comics’ industry for about fifteen years, to work his way up the ladder of television, on shows which he’d never watch—while keeping his hands in the comics business, because he knows nothing lasts forever.  He has a terrible reputation among fans for profanity, limited patience with nonsense, and spite, an attitude he’s finally and gratefully aged into.

1 - How did your first book change your life? How does your most recent work compare to your previous? How does it feel different?
It's been a long time--nearly 42 years--but I can truly say that I was daunted by that first job.  I had no work ethic, and little skill, so that job--and much of my first ten years of work--makes me cringe.

2 - How did you come to writing and drawing for comics, as opposed to, say, prose fiction or non-fiction?
I never dreamed of doing anything but comics.  Until I was in my mid 30s, I was never able to visualize myself as any other kind of talent.  I first came to Los Angeles as a visitor in the early '70s, but was incapable of translating what I saw as my skill sets into a money making proposition in Hollywood until the late '80s, after FLAGG! had generated an interest in me as an exploitable property.

3 - How long does it take to start any particular project? Does your writing initially come quickly, or is it a slow process? Do first drafts appear looking close to their final shape, or does your work come out of copious notes?
My process as a writer is informed by my long experience as a cartoonist, and by the fifteen years I spent as a journey television writer/producer.  It's all about a germ becoming a sentence, then a paragraph, then a page, until I've got a rough beginning, middle and end.  At this point, I begin to apply the tropes and necessities of the delivery system.  In comics, this rough document becomes a series of (frequently cryptic, often nonsensical) sentences on individual index cards, each representing a page.  This process evolves geometrically, from page to panel to final dialogue, at which point I do pretty much the same thing visually--thumbnail, layout, rough, pencil, rough ink, polish, finish.  It sounds like it takes forever, but it's actually a very time serving efficient approach,  For me.

4 - Where does a story usually begin for you? Are you an author of short pieces that end up combining into a larger project, or are you working on a "book" from the very beginning?
The context of story dictates its volume.  As I speak, I'm doing precisely what I describe above with a project to be drawn later this year.  I'd had an eight page outline in my book for awhile, and had presumed, based on the volume, that it would break down into eight parts.  When I started carving, however, the natural breaks came to five issues--but issues that were a bit longer than the current standard.  After confirming with my publisher that this would work, I proceeded.

5 - Are public readings part of or counter to your creative process? Are you the sort of writer who enjoys doing readings?
Oh god--not a chance on this specifically, but I will admit, once you put me near a microphone, my natural oralalia, tinged with a touch of tourette's, takes over.

6 - Do you have any theoretical concerns behind your writing? What kinds of questions are you trying to answer with your work? What do you even think the current questions are?
None of the above impacts on my comics stuff.  On the other hand, when I'm solicited to provide introductory essays, I believe it's my responsibility to do more than talk about brushes, ink, and drawing technique.

7 – What do you see the current role of the writer being in larger culture? Does s/he even have one? What do you think the role of the writer should be?
I believe the role of the writer in contemporary life has been profoundly diminished by the internet and blogs. It's along the lines of what's happened in the legitimate theater over the last two decades.  The audience gives everything a standing ovation--which, of course, leaves no room for a response to genuine excellence.  By democratizing opinion, an actually informed opinion gets lost in the shuffle.  I've always felt my tombstone should read "My informed enthusiasms found wanting by your ignorant indifference."  Snobbish?  Sure.  Elitist?  Fucking A.

8 - Do you find the process of working with an outside editor difficult or essential (or both)?
Both.  For the past year, and for the foreseeable future, I'll be working with companies where I've had to hire an editor myself.  Thus, I find myself fighting hammer and tong with someone I'm paying to fight me.  Go figure.

9 - What is the best piece of advice you've heard (not necessarily given to you directly)?
Humility is best defined as being comfortable with one's own insignificance.  And secondly, serenity is learning to live with Plan B.

10 - How easy has it been for you to move between writing a story and drawing a story? What do you see as the appeal?
Writing and drawing your own stuff is a control freak's wet dream.   That said, I still love drawing other people's stuff.  It keeps me from getting stale.

11 - What kind of writing routine do you tend to keep, or do you even have one? How does a typical day (for you) begin?
Whatever I'm doing, writing, drawing, yelling, my day begins at around 5:30 AM.  I do my clerical stuff, then take two hours off for breakfast with colleagues and friends.  then my desk from 9:00 AM until 5:00 PM.  Yes, I'm that organized--this, to deal with my natural bent toward chaos and distraction.

12 - When your writing gets stalled, where do you turn or return for (for lack of a better word) inspiration?
Never happens.  And when it does, you can't beat Count Basie's old testament band.

13 - What fragrance reminds you of home?
The sea.

14 - David W. McFadden once said that books come from books, but are there any other forms that influence your work, whether nature, music, science or visual art?
I'm a product of television, movies, comics, crime fiction, the American popular song, and the American musical theater--all of which have lied to me about my entitled expectations in the realm of happiness and romantic love--and all of which have been forgiven as I've gotten over my own collusion in my own delusional expectations.

15 - What other writers or writings are important for your work, or simply your life outside of your work?
I'll only list the dead, in no order--Dashiell Hammett, Raymond Chandler, Dawn Powell, Gore Vidal, Frank Loesser, Lorenz Hart, Donald Westlake, Fritz Leiber, Philip Farmer, Edgar Rice Burroughs, Cole Porter,  S.J. Perelman, Patrick Dennis...more will occur to me later, but since they're all dead, no hurt feelings from omission.

16 - What would you like to do that you haven't yet done?
I'd very much like to live abroad for a few years.  This has been a life long dream.  Personal circumstances which are no one's business have taken this off the table, at least for the foreseeable future.

17 - If you could pick any other occupation to attempt, what would it be? Or, alternately, what do you think you would have ended up doing had you not been a writer?
I'm afraid I'm unemployable, so my other dream, becoming a working musical comedy actor, is a perfect choice.

18 - What made you write, as opposed to doing something else?
See above in re: unemployability.

20 - What are you currently working on?
I'm reviving BUCK ROGERS in a four issue miniseries for Hermes press.   I'm drawing SATELLITE SAM, a crime thriller taking place in the world of 1950s children's television, written by Matt Fraction.  I'm writing a drawing a crime piece entitled MIDNIGHT OF THE SOUL, the story of a damaged war vet who finds a spiritual awakening.  And finally, I'm doing a BLACK KISS CHRISTMAS SPECIAL, and a sequel, BLACK KISS3--which, if history repeats itself, will also be unavailable to Canadians everywhere.

Thanks for your kind attention.

12 or 20 (second series) questions;
Posted by rob mclennan at 9:01 AM
Labels: 12 or 20 questions, Howard Chaykin, The Ottawa International Writers Festival