Imagine poetry as a series of terraces, some vast, some no bigger than a pinprick, overlooking the city of language. The sound and light show begins in the dark: sentences dart by, one by one, forming wave after wave of the rag and bone shop of the quotidian, events passing before our eyes like the faint glimmer of consciousness in an alcoholic stupor. Facts, facts everywhere but not a drop to drink. (“The Truth in Pudding”) 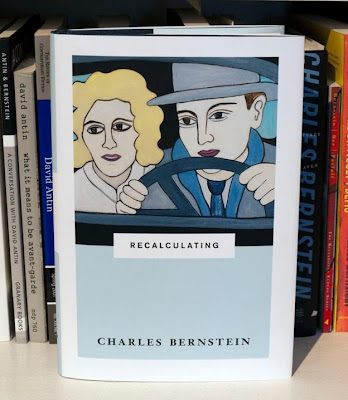 In his third poetry collection with the University of Chicago Press, New York poet Charles Bernstein’s Recalculating (Chicago Il: University of Chicago Press, 2013) reinforces his exploration of the procedural, the shifting sands of what exactly poems are made of, and how they are constructed. Bernstein’s oeuvre is a constant recalculation, even as the title refers to a technology that didn’t exist when he first began composing and publishing poems. There is something exciting in the way his poems work to keep up with and even ahead of not just technology, but the culture itself. Take the poem “Poem Loading…” made up of the single line, “please wait” (p 12), or a longer poem that harkens back to his previous collection, “The Most Frequent Words in Girly Man,” that opens: “the / is / of / to / in / and / like / you / that / it / on / for / but / with / not / as / war/ no” (p 141). Something of this piece is reminiscent of a poem from the “sound poetry” issue of Prism International from decades back, when a poet I can’t recall the name of reworked Robert Frost’s “Stopping By Woods on a Snowy Evening,” reordering the entire poem’s words in alphabetical order. And yet, Bernstein composes poems from a series of foundations, including “translations and adaptations of” pieces by Sylvia Plath, Paul Celan, Cole Porter, Pessoa, Baudelaire, Marjorie Perloff, Wallace Stevens, Robin Blaser and Apollinaire, among so many others. This collection manages somehow to contain the multitudes of constant questioning and re-questioning and a considerable re-grounding.

Always admirable in the work of Charles Bernstein is the sense of play and wry humour, and the wide variety of forms he is willing to explore. Part of his exploration of the poem relates very clearly to how poetry is not only composed, but in how it is read, and the shifting ways the internet has shifted the contemporary reading of the poem, such as in the piece “This Poem is in Finnish”:

This Poem is in Finnish

Translate it by toggling here

While I remain in English, either stranded
Or as one drunken and wheeled to a paddy
Wagon. There was a time I drank blueberry
Wine but that was long ago and my powers
Of recollection are still too strong to forget.
As one overcome by waves of wanton flash-
Backs, acid dreams of moments all too real,
Finds himself mirrored by the mind of a very
Little boy trapped in the body of an old man.

This is an age where the evolution of the internet has increased poetry production and readership, as opposed to what had been earlier feared, and Charles Bernstein has long been at the forefront of such, as both writer and reader. Even this review, one might say, which will most likely receive more “hits” than most literary journals have print runs. Charles Bernstein works a pretty big canvas in his writing, far broader in scope than what lives within the boundaries of Recalculating, a collection that contains a constant movement. The title of the collection reads as the perfect metaphor for Bernstein’s work as a whole, moving in one direction until he takes a deliberate turn and adapts, all the while driving, constantly driving, never lost, but confidently searching, seeking and wondering.