anguish laid flat against another edge
a simple bone-bridge

is an earth breached, planted moon
between heels

swimming outdoors of language
the knot has slipped

Guelph, Ontario poet Shannon Maguire’s first trade poetry collection, fur(l) parachute (Toronto ON: BookThug, 2013), expands out from the Old English poem “Wulf and Eadwacer,” as she writes at the back of the collection:

Wulf and Eadwacer: The Old English poem Wulf and Eadwacer which appears in the 10th century Exeter MS between the elegies and the riddles. There is no consensus as to its meaning, origin, or even to genre. Some see it as a riddle, others as an example of woman’s lament, and yet others in the broader tradition of the elegy. It is a formal oddity, being one of only two extant Anglo Saxon poems having a refrain (the other poem is Deor), and being one of the few extant Anglo Saxon poems to be written from the point of view of a woman. 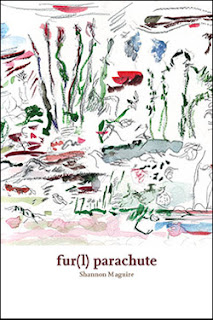 The second collection produced by BookThug (alongside Christine McNair’s spring 2012 collection Conflict) originally on the shortlist of the 2011 Robert Kroetsch Award for Innovative Writing, Maguire’s fur(l) parachute is structured as a single work composed in six sections, some of which fragment into subsections, even as the poems themselves fractal, breaking down pieces into phrases, words and singular letters. With words and lines crossed out, individual letters floating across an open space of the watery white page, or reduced to the syntax of a howl, her collection begins from the kernel of the original Old English poem, while using the thousand year old piece as a bouncing-off point, unafraid to explore and expand sound and stretched meaning, inference and the shape of the page. The collection opens with a reworked version of the original poem, “a transformation from Old English,” before the poem extends, and continues into sections for each of the characters. Fascinated with origin, the collection opens with what Erin Mouré called (for her own Sheep’s Vigil) a transelation, reworking her own version of “wulf & eadwacer” into something far greater.

To my people (s)he is a sacrificial gift
They wish to serve h(er)    as food to their god
if (s)he comes     in a host
To lead my poor wrenched cub to the tree, my people desire
Love is different with us!
Do you hear us in our song, watchman?
We two that never united
That my people easily tear apart
We are different!

Wulf, my Wulf!
Your expectations make me sick
Your infrequent visits tell me that you mourn my heart
not at all
Wulf, you are my far-wandering hopes!

Now Wulf is on one island and I on another.
Secure, enclosed, firm, fast fixed is that island.
I am a fen surrounded by a slaughter-cruel
troupe that wishes
to serve h(er)       up if (s)he comes.
(“wulf & eadwacer”)

Writing references that include “a wetlands Ophelia,” Shakespeare’s Ariel and Mae West, Maguire’s fur(l) parachute is rife with stories and myths, weaving in threads from other tales. Through these references, she hammers the point of speaking, giving voice to a series of women too often muffled, muted, dismissed or altogether voiceless. In fur(l) parachute, Maguire transelates Old English and Middle English into language poetry, composing a new kind of becoming and emerging from the dark, deep woods. This is a book worth listening to; a book with just as much bite as bark.

so small so smooth her three sides were

Posted by rob mclennan at 9:01 AM
Labels: BookThug, Shannon MaGuire