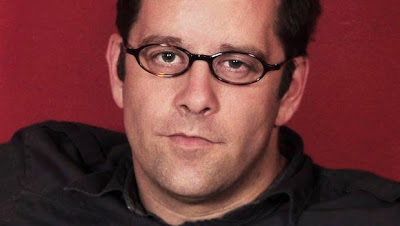 TAMAS DOBOZY was born in Nanaimo, BC. After receiving his Ph.D. in English from the University of British Columbia, he taught at Memorial University. His work has been published in journals throughout North America, and in 1995 he won the annual subTerrain short fiction contest. When X Equals Marylou, his first collection of short fiction, was shortlisted for the Danuta Gleed Award. His Siege 13 was winner of the 2012 Rogers Writers' Trust Fiction Prize, and a finalist for the 2012 Governor General's Literary Award for English-Language Fiction. Tamas Dobozy now teaches in the Department of English and Film Studies at Wilfrid Laurier University in Ontario.

1 - How did your first book change your life? How does your most recent work compare to your previous? How does it feel different?
My first book was a mistake. It made me aware of what was at stake in writing. The company went bankrupt, so I'm safe. No one will ever put that book out again. I think this recent work is stylistically an extension of "Last Notes and Other Stories" but also a departure into a lot of 3rd person writing, so in that regard a return to the book before that, When X Equals Marylou. It's the first time I've tried to put together a book of stories that has a cohesive subject matter, so in that way it's different.

2 - How did you come to short fiction first, as opposed to, say, poetry or non-fiction?
I started as a poet, actually, but sucked at it. So I turned to short fiction because novels take too long to write, and I get bored. A short story is like a poem in a way, highly compressed, except that it has a plot (or at least mine do).

3 - How long does it take to start any particular writing project? Does your writing initially come quickly, or is it a slow process? Do first drafts appear looking close to their final shape, or does your work come out of copious notes?
Sometimes it's fast, sometimes slow. This time around it took me seven years to put together the book. I guess that's slow, though it didn't feel that way to me at the time. Sometimes stories come whipping off my fingers, sometimes they are an agony of snail's pacing. "Rosewood Queens" took 27 drafts, and I'm not talking proofer's drafts, where you're changing the "the's" to "a's," but serious ground-up rewriting each time. It eventually turned into two stories, "Rosewood Queens" and "Old Water." I make lots of notes, go back and delete stuff, shift things around. It's a terrible process. I hate it. But there's no other way.

4 - Where does a story usually begin for you? Are you an author of short pieces that end up combining into a larger project, or are you working on a "book" from the very beginning?
Lately stories begin with a title or first line. I usually write discrete stuff, and publish more of it in journals than eventually come together in a book. I love publishing in journals more than anywhere else. I take breaks from the "big book" and work on discrete stuff as it comes to me. It's pretty random, though the final book is a very carefully shaped object.

5 - Are public readings part of or counter to your creative process? Are you the sort of writer who enjoys doing readings?
I like the travel, but I'm not a big fan of readings. But at least readings are easy. What I really hate are giving lectures. They take so much time to write up and organize, and I have so little time already. I'd rather be working on my own fiction. I've decided not to do them anymore unless I'm offered so much money I can't say no, and who in his right mind would offer me that kind of money anyhow?

6 - Do you have any theoretical concerns behind your writing? What kinds of questions are you trying to answer with your work? What do you even think the current questions are?
I like Benjamin, Agamben, Blanchot, De Certeau. Those are theorists I read a lot of. But when I'm writing a story the main questions are just, "How am I possibly going to make sense of all this stuff? How is this going to end? When can I move on to something else?" The questions are all issues of problem solving, very practical, even pedestrian. There's very little magic. I don't know what the current questions are in general, but my own all revolve around how awful human beings are, and why can't they be made a little better.

7 – What do you see the current role of the writer being in larger culture? Does s/he even have one? What do you think the role of the writer should be?
Other writers can do whatever they want. I have no prescription for them. It's their business. I like to attack certain kinds of truths or certainties and demonstrate how they're never absolute, and how uncertainty is really the best position to assume in almost all instances. That's a political, cultural and epistemological project. I also really like to entertain readers, make them interested in how a story is going to turn out. Entertainment above all else, I say, but of course there's entertainment and then there's entertainment.

8 - Do you find the process of working with an outside editor difficult or essential (or both)?
Essential. I have always liked working with editors, and been lucky to have worked with some good ones.

9 - What is the best piece of advice you've heard (not necessarily given to you directly)?
"You will never make any money at this." This is a liberating statement; there's no money in writing, so you get to do whatever you like. How many other occupations offer such liberty?

10 - How easy has it been for you to move between genres (short stories to critical prose)? What do you see as the appeal?
I do critical prose for my job. If it wasn't required by the university I'd never write another scholarly essay in my life. It's a totally different thing. You drop the quarter in, the machine moves across the page, out pops a critical piece. Stories are totally different, not mechanical at all, susceptible to the vagaries of accident, weather, mood, etc. I can force out a scholarly piece no problem; but I can't force out a story, no matter how I try.

11 - What kind of writing routine do you tend to keep, or do you even have one? How does a typical day (for you) begin?
If I get an hour a day I'm lucky. No routine. I write wherever and whenever I get a break. A typical day for me begins with dragging four kids out of bed to get to school, and then a pile of committee meetings at the university, and then a big glass of Redbreast at night to get me to sleep.

12 - When your writing gets stalled, where do you turn or return for (for lack of a better word) inspiration?
Self-flagellation, usually. I just keep attacking the page until I get a breakthrough, or I throw the whole thing away and start something new. There is no such thing as inspiration. It's all just work. Sometimes you think you've been inspired, and then you realize it's just the announcement of a big job that needs to get done.

13 - What fragrance reminds you of home?
The sea.

14 - David W. McFadden once said that books come from books, but are there any other forms that influence your work, whether nature, music, science or visual art?
Music is a big part of my life, and my working life as a writer, mainly jazz and classical. I used to love Pop music, but it bores me very quickly now; it doesn't present enough information. Two weeks of listening and the CD's ready for the garbage. Maybe that's the point of Pop Culture, instant recycling, I don't know. I also love visual art and spend a fair bit of time looking through it.

15 - What other writers or writings are important for your work, or simply your life outside of your work?
I like Alvaro Mutis, Mavis Gallant, Eudora Welty, Kenzaburo Oe, Mikhail Bulgakov, Claudio Magris. Those are the big ones. There is no distinction between the work and the life in that regard.

16 - What would you like to do that you haven't yet done?
It would be great to learn to skate very well. I'd love to be able to do that.

17 - If you could pick any other occupation to attempt, what would it be? Or, alternately, what do you think you would have ended up doing had you not been a writer?
I would love to be an electrician, something that's definite, hands-on, that at the end of the day produces something of actual effect in the world. If I hadn't been a writer I'd probably be a scholar, which I am anyhow. I was no good at dealing with the material world.

18 - What made you write, as opposed to doing something else?
It was the only thing I loved unequivocally.

20 - What are you currently working on?
Just stories, really. A bigger project hasn't yet fully emerged. The story I'm working on right now is called "Ileo." I may have to throw it away. At this point it would be a relief.