It is an academic truism that the avant-garde has been dominated not simply by men, but by a masculine set of ideals. This may be true, but we cannot let the conversation stop there. experimental poetry is a vanguardist tradition, and one that is often conceived of as a solitary act. But, in this book—and always—I envision a literature that is built on writing as an act of sharing, of becoming stronger and more beautiful in the ways that our writing reads back over the writing that came before it, and leaves itself open and unfinished for the writing that comes after. So, hidden in the vanguardism of the avant-garde is a deeply communal, feminist poetics of derivation, homage, and love. My poems in this collection work to bring the feminist, communal poetics to the fore of the visual poem through the merger of the analogue technology of the typewriter and digital intervention.
OO is deeply citational and works to forge a community out of visual poets who continue to create softness in a kind of poetics strangely named concrete. This project takes up a conversational, communal poetics, quoting “lines” from visual and concrete poems and playing fast and loose with the form of the glosa, where four lines from an original poem are repurposed in a new poem as the final lines of four ten-line stanzas. (“Introduction”) 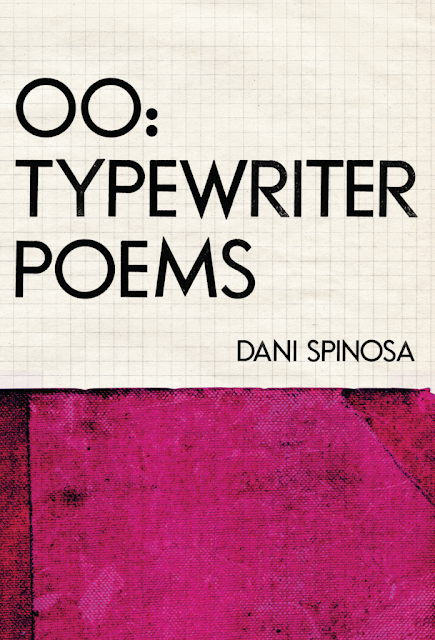 I was very pleased to get my hands Toronto poet, editor, critic and publisher Dani Spinosa’s full-length visual poetry debut, OO: Typewriter Poems (Picton ON: Invisible Publishing, 2020). As she suggests in her introduction, concrete and visual poetries have long been male-dominated, and the female practitioners over the past few decades, in Canada, at least, have been far less acknowledged. jwcurry has repeatedly referred to Judith Copithorne, for example, a Vancouver poet who has been producing and publishing visual and concrete works since the late 1950s, as “our first lady of concrete,” but her work is often overlooked (for a variety of reasons, one might argue) for the sake of others of her generation who were more ambitious, prolific and male. This kind of reclamation work is reminiscent of Dean Irvine’s work on the late Canadian poets Dorothy Livesay and Anne Wilkinson through Archive for Our Times: Previously Uncollected and Unpublished Poems of Dorothy Livesay (Arsenal Pulp Press, 1998) and Heresies: The Complete Poems of Anne Wilkinson, 1924–61 (Véhicule Press, 2003), or the more recent volume WANTING EVERYTHING: The Collected Works of Gladys Hindmarch, edited by Deanna Fong and Karis Shearer (Vancouver BC: Talonbooks, 2020) [see my review of such here]. There is so much work that gets overlooked for arbitrary reasons, including gender, and these reclamations become an essential literary service.

While I give Derek Beaulieu an enormous amount of credit for doing much of the work of bringing concrete and visual poetry back into the Canadian mainstream (engaging far more with the literary journals and the small/micro press than, say, Christian Bök) from the late 1990s onward, there did seem a shift in the conversation around visual and concrete poetries when Dani Spinosa and her pal, Kate Siklosi (the co-founders/editors/publishers of Gap Riot Press, a Toronto-based feminist chapbook press) appeared on the scene a few years ago with a fresh set of eyes, an eagerness to learn everything they could about visual and concrete works, and a healthy suspicion for how things had always been. Poems, chapbooks and statements by Spinosa and Siklosi began to emerge, working to question and challenge how writing is made, and how writing is seen.

Again, as Spinosa writes in her introduction, the visual pieces in this collection are built as part of a conversation with those who have engaged with the form, composing her own visual pieces with titles after other practitioners of the art—Judith Copithorne, Steve McCaffery, Shant Basmajian, Johanna Drucker, John Riddell, derek beaulieu, Bob Cobbing, et al—and utilizing those pieces as small studies around each individual’s work and practices. One could say that this collection is both Spinosa’s personal study in the history of visual and concrete poetry as well as a collection of original works. As she suggests, she brings herself into the conversation. The collection offers fifty named poems set in five sections, with a final section of ten further poems, structuring her sections in thematic gatherings, the titles of which play off bpNichol’s infamous poem carved into the pavement along bpNichol Lane: “A LOOK,” “A LACK,” “A LIGN,” “A LOBE” and “A LONE.” The ten-poem section “A LACK,” for example, focuses on women visual poets, as “A LIGN” collects a series of poems named for poets such as bill bissett, bpNichol, Jiri Maloch, Pierre Garnier and David Aylward, who, incidentally, was the author of the first book produced by Coach House Press back in the early 1960s. There is something quite delightful in seeing Aylward’s name here, and numerous other names that haven’t been on the radar of Canadian writing and publishing for some time. She’s clearly done her research, and if one were even to put together an anthology of or essay on the history of concrete and visual poetries, this would be the list of names included. Or, given Spinosa’s deliberate inclusion of these multiple women practitioners, this is the list of names that should be included; and hopefully, in part through Spinosa’s work, a list of names that will no longer be overlooked.

The shift in visual and concrete poetries in Canada over the past few years has been interesting to see, as Spinosa and Siklosi, both, seemed to emerge simultaneously alongside other poets working to re-shape the art, from Eric Schmaltz in Toronto, Sacha Archer in nearby Burlington, Michael e. Casteels in Kingston and Kyle Flemmer in Calgary, among others. Each of these poets are exploring fascinating directions, opening up the boundaries of visual and concrete works, and Spinosa is now the third poet in this list to achieve a full-length published debut, after Casteels’ The Last White House at the End of the Row of White Houses appeared in 2016 [see my review of such here], and Schmaltz’ SURFACES appeared in 2018 [see my review of such here], both of which also appeared through Invisible Publishing. As well, there is an enormous amount of play evidenced through Spinosa’s visuals, something that certain strains of visual poetries have managed to forget over the years; the play of the late Toronto poet bpNichol was such an essential part of his work and his life that the lack of it in subsequent works is noticeable. With all of the serious intent and study, where is the play? Dani Spinosa is clearly having a glorious time, and it shows.

The collection ends with a conversation between Spinosa and Siklosi, their “‘Like, That is Femmeship’: An afterword in feminist conversation between Dani Spinosa and Kate Siklosi,” a back-and-forth that articulates some of the issues their works attempt to address. As they write:
D: But for some reason that still persists in this niche little field of visual poetry. And also, like, I had no idea about the long history of women who were doing this particular work.

K: Yeah. You wouldn’t have heard of that, right?

D: No. It’s been cold discovering women writers who were doing typewriter stuff when I kind of wouldn’t have known that before. And also, as I’ve been fleshing out this project, someone whom I have been working with has been like, “Oh, cool, I’d never heard of Bentivoglio or Hansen.” So, it’s not that there wasn’t a readership for it. People were interested in finding out which other women had been working in visual poetry. I just always feel like I understood the process of writing as writing on top of other people who had been writing before me.