Someone tweets a report of a brawl breaking out at an East York, Pennsylvania Red Lobster, due to the three-hour wait times. People are this close, someone else responds, to losing it. My mother-in-law forwards us an article from CTV News, as Ontario-based owners of cottages in rural Quebec are voicing their frustrations, unable to visit or even check in on their properties. It is suggested that local residents in the area are reporting cars with Ontario plates to the police. What choice might they have? Out-of-towners entering a rural community and potentially utilizing what little medical resources such an outpost might hold, if they were to develop symptoms. And as Christine reminds, Montreal is still considered a hot-spot. The numbers out of Quebec are higher than the rest of the country.

As Charles Legere writes as part of the poem “The Coppices of Pleasure,” in the latest issue of FENCE magazine (36 Winter Early 2020):

I can’t recall the sensation of pleasure, only the context, which I would have to tell as a story. 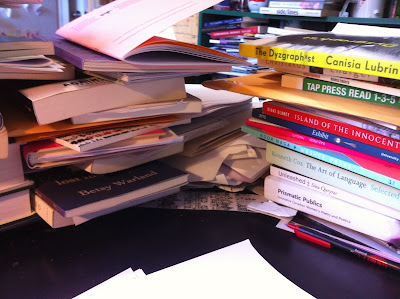 I am thinking about time, and how one can’t help but comprehend this temporal stretch as a formless mass. In her memorable Elizabeth Smart: A Fugue Essay on Women and Creativity (2004), Toronto writer Kim Echlin offers: “My own memory of giving birth is of how time and space disappeared at the end of my labor. I was the still centre; there was nothing but pain and breath. The threshold between life and death receded. The helping voices and tending hands around me seemed disembodied and remote. Through my own body I was both instrument and agent of nature. It is clear to me why certain women want to have many babies and why many women take new direction after childbirth.” Christine returns from an errand later than I might have expected, having accidentally spent half-an-hour on the phone with our friend Shannon, who is home with newborn twin boys born four pounds each some two or three weeks ago. They are all fine, by the way, despite the quarantine birth. Christine hums at the excitement of meeting them, although we have no idea when.

Slipped inside as a folded book-mark in my copy of Echlin’s book-length essay, I discover the print-out of an email I received from Vermont poet Paige Ackerson-Kiely, along with a poem she attached to the email, “Love Poem to a Stranger.” “I spied eleven lank deer in one evening,” her poem begins, “feeding on different lots.” The email is dated January 7, 2008, which seems an entire lifetime from here, from now. Curious as to where the piece may have ended up, I eventually locate the published version of her poem, nearly intact but for some minor tweaking. She re-titled the poem “Misery Trail,” and the poem lives in her second full-length collection, My Love is a Dead Arctic Explorer (2012). Hindsight suggests there is something of a place-holder aspect to the earlier title, but still, I wonder: how does one move so far, from the suggestion of a more wistful longing into something darker, over the span of some four years? Both versions of the fourteen-line poem ends with the couplet:

So I walked, uncharacteristically slow.
You couldn’t know how slow I walked.

There. So there is such a thing as time.

Nice, Rob. Also, new temporal experience and implications from living for hours on zoom. The micro-temporal losses, from signal freezing anD dropouts. The possibility that all time (on zoom) has become a documentable event (with a time counter in the corner). Or, with Facebook live, the ability to leave comments in ‘real time’ during a poetry reading that is no longer live but just a recording; like you’re there with everyone else who attended the live stream and left comments in real time, but you’re not there, in that time. Enjoying your posts!