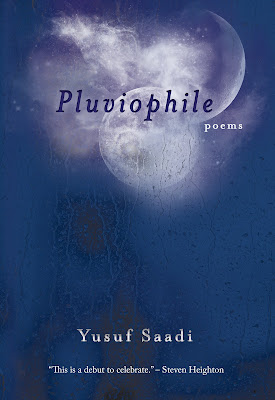 Yusuf Saadi’s first collection is Pluviophile (Nightwood Editions 2020). He previously won the 2016 Vallum Chapbook Award and the The Malahat Review‘s 2016 Far Horizons Award for Poetry. At other times, his writing has appeared in journals/anthologies including Best Canadian Poetry 2019, The Malahat Review, Vallum, Brick, Canadian Notes & Queries, Best Canadian Poetry 2018, Arc, Grain, CV2, and The Puritan. He holds an MA in English from the University of Victoria and currently lives in Montreal.

1 - How did your first book or chapbook change your life? How does your most recent work compare to your previous? How does it feel different?
My first chapbook relieved a lot of dread: I was like, well, if I die right now, at least my life wasn’t a complete waste. I consider myself incredibly fortunate with my first collection coming out – I’m fulfilling a dream, which is a privileged experience many never have. I wish the book wasn’t coming out during the corona pandemic, but what can one do.

2 - How did you come to poetry first, as opposed to, say, fiction or non-fiction?
I always intended to write prose, and I read more prose, but I somehow ended up gravitating toward poetry. My mind tends to find the minutia of language more interesting than writing characters or plot. (I also find writing characters and plot challenging; maybe that’s why I don’t find myself as drawn to it?)

3 - How long does it take to start any particular writing project? Does your writing initially come quickly, or is it a slow process? Do first drafts appear looking close to their final shape, or does your work come out of copious notes?
I’m pretty slow – I like to have a line or two to begin with and play with it in my head while I’m walking to school/work, running errands, etc. Then once I get it down on paper I keep picking away at it. This might take a couple of weeks, but usually several months.

4 - Where does a poem usually begin for you? Are you an author of short pieces that end up combining into a larger project, or are you working on a "book" from the very beginning?
I only have about one collection’s worth of poems – they were all conceived of as individual pieces. I tend to like this better as it allows you to begin each new poem with a blank horizon.

5 - Are public readings part of or counter to your creative process? Are you the sort of writer who enjoys doing readings?
Well, the last time I did a reading I was introduced as a “recluse” which was quite amusing (and maybe a tiny bit insulting). I don’t do a lot of readings as I prefer to keep my work to myself, but every once in a while I’ll randomly get an inkling I should do one or I’ll get invited to one that feels right and I’ll use it as a reason to edit existing poems.

6 - Do you have any theoretical concerns behind your writing? What kinds of questions are you trying to answer with your work? What do you even think the current questions are?
I think similar concerns as a lot of poets – what is the relationship between language, imagination, and world? Where do poems come from? I think ethical questions are important. How does the way we use language shape our relationship to the natural world and other beings? How can we language to create more harmonious ways of living?

7 – What do you see the current role of the writer being in larger culture? Does s/he even have one? What do you think the role of the writer should be?
I don’t have too much belief in using art to simply disseminate ideas – YouTube or Reddit is more effective for that. I see poetry as often very personal – to go to a place with language that only you can go, to craft yourself into a person that can write something no other being could ever write.

8 - Do you find the process of working with an outside editor difficult or essential (or both)?
I do like to share poems with friends. I had my first experience with an official editor while working on my debut collection with Nightwood. I found it helpful, but having a final deadline for the ultimate version of each poem caused me unease: I like knowing I have the opportunity to continue picking away at a poem later with fresher eyes. I’m quite sure I really annoyed/frustrated my editors (though they never told me that directly).

9 - What is the best piece of advice you've heard (not necessarily given to you directly)?
Write for your best reader – assume they’re smart sensitive and don’t simply want information they could get on their own; they want a world.

10 - What kind of writing routine do you tend to keep, or do you even have one? How does a typical day (for you) begin?
I don’t have much of a routine, but when I do write it it’s often when other people are sleeping. In the past, that’s meant that I write late at night. I’d like to try to write early mornings if possible, as that’s probably better for my health.

11 - When your writing gets stalled, where do you turn or return for (for lack of a better word) inspiration?
Other books. When stalled, it’s nice to read writing that’s bursting with energy and ideas. Rilke always feels alive (in English – I can’t read German, unfortunately). David Foster Wallace. Anne Carson. Wallace Stevens. Also writing that can be very intimate: Anne Michaels, Doyali Islam. I like to walk as well – it’s a kind of meditation for me.

12 - What fragrance reminds you of home?
I don’t know what home is right now.

13 - David W. McFadden once said that books come from books, but are there any other forms that influence your work, whether nature, music, science or visual art?
I’d say all of the above at different times. I like ekphrastic poems.

14 - What other writers or writings are important for your work, or simply your life outside of your work?
I’m not much of a philosopher, but I like to dabble. I also like to read works on poetics written by poets, especially those philosophically inclined — I like essays by Tim Lilburn and Don McKay recently. And I try to read history when I can, especially on South Asia and Bengal; it’s something I wish I knew more about.

15 - What would you like to do that you haven't yet done?
Learn Latin and even Greek if I have the discipline. Read Proust in French. Read Bengali. Get to RCM 8 in piano. Visit Germany and Spain, especially Berlin. Develop a relationship with a place I can call home. Be in life-long love.

16 - If you could pick any other occupation to attempt, what would it be? Or, alternately, what do you think you would have ended up doing had you not been a writer?
I think musicians are the coolest people on Earth.

17 - What made you write, as opposed to doing something else?
I’ve always wanted to write since I was a kid. I never thought about it too much.

18 - What was the last great book you read? What was the last great film?
I recently reread The God of Small Things. Except for occasional descriptions I wasn’t a fan of (the characterization of Velutha’s “chocolate skin”), it absorbed me with its ways of seeing how power is wielded by people across political, cultural, and national spectrums, as well as the childlike curiosity and inventiveness that pervades the language. The chapters “The God of Small Things” and “Kochu Thomban” in particular are lovely – I like the story of the actors who’ve sold their souls to become cultural artifacts for tourists and then perform all night until dawn with no audience to seek clemency for selling their souls for bread.

19 - What are you currently working on?
I’m slowly working on some new poems. Possibly digging up my old novella on South Asian partition. And I actually have a couple of ideas for short stories I’d like to try out.