I like a forest that has evidence of a fire.
The smell of ants blackened in the sun.

I like grass with a lot of husks. Fossils have kind hearts.
They only appear in empty time. In empty time
a short flame can thin.

I like the ficus planted inside the sneakers you left behind.
If I open my eyes, I go inside a big jar and roll around.
I come to a halt in front of a hill.

Filled with silence, I like the empty endings of my words.
Like the necks of giraffes that live inside wallpaper,

a dim smudge is left by a finger or a pull-up bar. The silence
of a hand loosening its grip is good. Because I am a dark stadium,
carefully, you press a thumb inside my mouth. 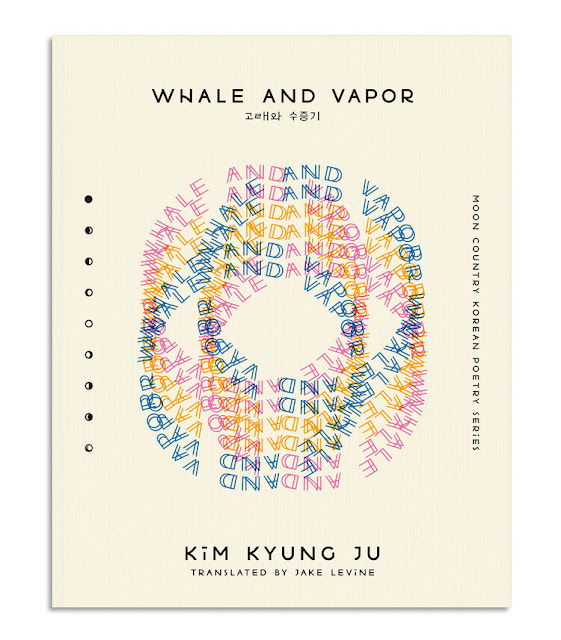 From “Seoul-based poet, dramatist, and performance artist” Kim Kyung Ju comes the full-length collection Whale and Vapor (Black Ocean, 2020), translated into English from Korean by Tucson, Arizona translator, poet and scholar Jake Levine. Considered “one of the most prominent younger writers in South Korea,” Kim Kyung Ju is the author of ten books of poetry, essays and dramaturgy, and this is at least the second collection of his that Levine has translated into English, after I Am a Season That Does Not Exist in the World (Black Ocean, 2016). “When a sentence gets caught on a flock of birds,” they write, to open the poem “WITHOUT A TRACE,” “if often makes a sound.” There is a silence and a smallness to these lines, and a deep intimacy throughout, in poems that encompass whole worlds, hushed across such small moments. “You’ve got to make peace with my chaos. / It’s a chaos no one understands.” If there is a chaos here, it is one that has been, through the composition of these poems, these short lyrics, been systematically dismantled and reassembled as carefully-considered meditations. There is a calm in these poems that might move through the elements of chaos, utilizing chaos to become something other, and something more, displaying an incredible level of control. As part of his “TRANSLATOR’S PREFACE” that opens the collection, Levine writes:

The poems in Whale and Vapor incorporate a sense of repetition that is influenced by the father of contemporary Korean poetry, Kim Soo Young. Like Kim Soo Young, the repetition in Kyung Ju’s poems mirrors the themes of exhaustion. This perhaps has much to do with the historical and political circumstances in Korea when the book was being written. Park Geun Hye, the daughter of the former military dictator Park Chung Hee was elected president in 2012. It was a dark time. These poems are playful, but a lot of the romanticism and hope of the earlier work has been dimmed by that experience. However, the turn toward the lyric might be a way in which Kyung Ju reconciles losing the idealism of his early work. It is a turn toward tradition, toward Kim Soo Young, and his literary ancestry.