today would have been my father's seventy-ninth birthday, 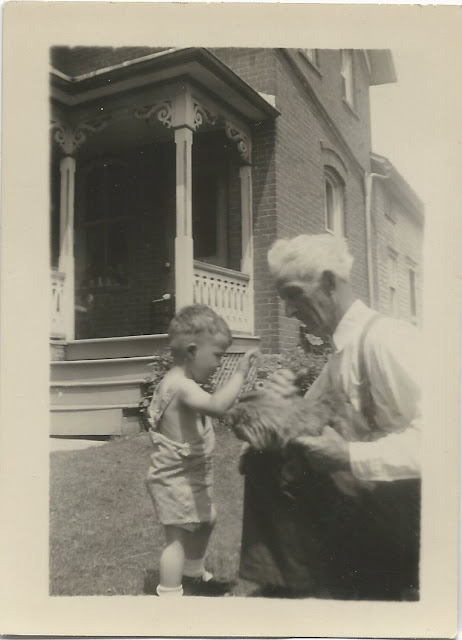 And here's a photo I discovered during one of our house-cleaning/sorting sessions, of my wee father with his maternal grandfather, Fred Campbell (1873-1963), in front of the Campbell house on Marlborough Street, Maxville (just north of the post office). I found the photograph, among numerous others I hadn't previously seen, buried in a trunk in the master bedroom closet. Apparently when his maternal aunt, Harriet (1907-1991) died, her trunk and belongings were simply moved from the nursing home (the Maxville Manor) and into the farmhouse, seemingly unopened, unsorted. There are numerous examples of this around the house, from the trunk of 1000s of family photos going back six generations of Page family I couldn't access until my mother died (from her own mother, who died a decade prior to my mother), or my father's great-aunt, Belle, her trunk sitting out in the garage from the time she died in 1978 until a couple of years ago, when I finally realized it was out there. God sakes. It provides for some curious discoveries, but also some baffling questions as to why these were simply brought into the house and abandoned?

And here's the obituary I wrote for my father in May, in case you hadn't seen.