“There are more important things than living.” Texas Lt. Gov Dan Patrick says to Fox News’ Tucker Carlson, explaining his push to re-open the economy. I don’t even know how to process this, how there are those who see human life as disposable, compared to what they see as the needs of the economy. There are terrible, awful, stupid people everywhere, and I know certain of them manage positions that allow them particular platforms, and particular levels of power, all of which seems frightening. I’m baffled at this dismissal of human life, and its exactly the opposite of everything western media culture has taught us to believe. From World War II films to Star Trek to westerns (which might all be the same, single genre, really): Leave no man behind.

It just seems so blatant: how the working poor will be the ones bearing the brunt of these decisions. It seems utterly heartless, and utterly cruel. 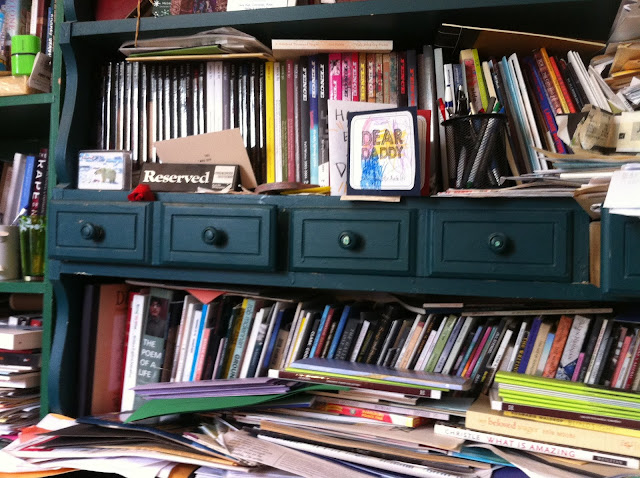 I’ve been seeking out my copy of a collection of essays by Alice Notley, feeling as though she might have something appropriate to offer in response. How does one write, or even continue, in the face of such arrogance, such culturally self-defeating attempts to keep money flowing into the coffers of the already-wealthy? The more one has accumulated, I’ve heard theorized, the more one becomes terrified of losing it all. The more one is willing to sacrifice another to maintain.

Christine and I were discussing it yesterday, of an American mythology built, essentially, around Libertarianism: a notion of individual liberty that becomes twisted to the point that a lock-down for the sake of a global pandemic and the continued safety and health of the American population is regarded as trampling on personal rights. How the government is out to get you, clearly. A disease created in a lab so they could take away your rights, your guns, your freedoms. Stories emerging of those who have died from Covid-19, including numerous Americans who declared the outbreak a hoax, or no worse than the flu. The dozens of pastors across the Bible Belt that have died after previously dismissing concerns, refusing to shut down services and downplaying any need for self-distancing. By the end of April, the Independent reports: “As many as 30 church leaders from the nation’s largest African American Pentecostal denomination have now been confirmed to have died in the outbreak, as members defied public health warnings to avoid large gatherings to prevent transmitting the virus.” Fox News editorials and round-tables spent weeks perpetuating dismissals of such preventative measures, but behind the scenes, did everything they could to work from home. There are those who would call this, too, a hoax. How does one protect anything against such willful ignorance? Not that we’re free of such in our country, either. Is there a difference?

I’ve been cleaning out further parts of my home office, a mound of books, chapbooks and papers at the base of a bookshelf, as well as a corner overrun with paper archive, eventually set to be organized and sent off to the University of Calgary. If you can imagine it, I’ve already some ninety banker’s boxes worth of literary archive sitting in their stores. And yet, there is no sign of that Alice Notley title.

Instead, I spend part of the morning rereading Maggie Helwig’s debut collection of essays, Apocalypse Jazz (1993), reminded of just how damned smart she is, writing on apocalypse, Bob Dylan, Northrup Frye and Japanese literature post-Hiroshima. As she writes on Shakespeare’s The Tempest:

We are all, necessarily, aware that the material world is an ambiguous thing. It may be brought to our service, even destroyed by us, but never willingly so; it is, for us, a strange combination of ally, slave and enemy. Or, to put it in terms that an Elizabethan would have understood, the Fall of man from Eden brought about a corresponding fall in nature; we, the cosmos, and our relationship with it are profoundly “out of joint.” And only when we are redeemed will the world be redeemed as well.

Roughly a decade after this collection appeared in print, Helwig was ordained an Anglican priest. There are times I envy her parishioners their access to her insights. I move through an essay by the late Kevin Killian from Biting the Error: Writers Explore Narrative (2004): “How did I write a whole book? I’m trying to remember.” “In the beginning,” Paul Auster writes, to open his Report from the Interior (2013), “everything was alive. The smallest objects were endowed with beating hearts, and even the clouds had names. Scissors could walk, telephones and teapots were first cousins, eyes and eyeglasses were brothers. The face of the clock was a human face, each pea in your bowl had a different personality, and the grille on the front of your parents’ car was a grinning mouth with many teeth. Pens were airships. Coins were flying saucers. The branches were arms. Stones could think, and God was everywhere.”

And yet, an article floats through from the University of Guelph, a news item from their website, “U of G Expert Says Pandemic Response Proves Changes to Protect Earth Are Possible.” The article focuses on poet Madhur Anand, “a University of Guelph expert in global change ecology and sustainability”: “What Anand thinks all of us can learn from this unique year is that rapid societal changes are possible and that social norms can change.”

I’m going to hold on to that. Might it be enough?