The terrible mind and how it wanders, automatic gestures,
a built-in push away from contact, or the eagerness to hold

like a heat-seeking missile, air to ground, flash of lightning,
can rearrange your ventricles forever, just one bolt, never

the same. Standing around in the whereabouts of some
magnetic field, did you say “love”? Where do we go from here? (“I”) 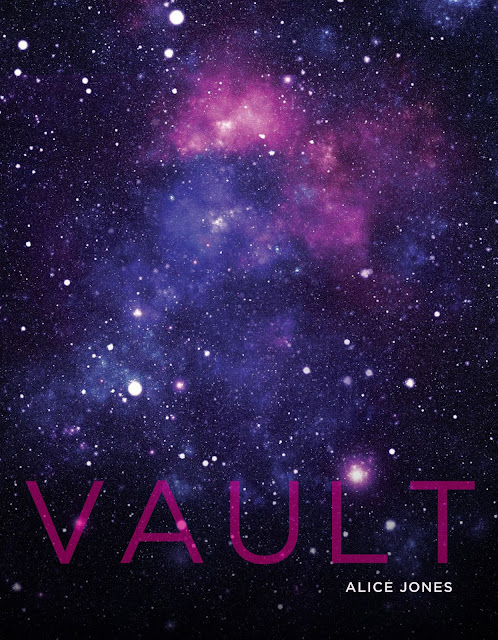 The latest from California poet Alice Jones, and the first of hers I’ve seen, is VAULT (Berkeley CA: Apogee Press, 2020), an exacting suite of long-lined lyrics set as a sextet of sections, each of which open with a vowel (including “Sometimes Y”). “Door, door opening on every pulse,” she writes, to open the poem “A,” “the same empty hall, / washed and unlit, the same peculiar night lit by green planets, // cradled on the inspired breath, one O, another, / the circle we emerged from, blood and muscle, space, […]” Each of her six sections contain five poems, all of which are built in couplets that further and extend, rolling and running across and down multiple pages. Searching her work out online, I was curious to see the long list of awards her work has won, and list of her other published collections—The Knot (Alice James Books, 1992), Isthmus (Alice James Books, 2000), Extreme Directions (Omnidawn, 2002), Gorgeous Mourning (Apogee Press, 2004) and Plunge (Apogee Press, 2012)—but nothing in the way of an interview with her on her work. Why is there always so much silence? I would like to better understand how she crafts such a detailed intimacy. She writes a lyric that works to shape itself around a series of absences, and how those absences connect to further absences, which themselves connect to all that remains. As she writes as part of the poem “Space” : “Last things, a letter doodled upon and never sent, one call unreturned, // one call placed while looking out my office window, red-rimmed, manic, as if disbelieving / in his dying, I drew while he described his hospital room.” There is something of her lines that remind of a quote by Canadian poet Don McKay (I think it was) that I can only paraphrase: lines that any bird would trust to land upon.

Posted by rob mclennan at 8:31 AM
Labels: Alice Jones, Apogee