Roger Farr, I Am a City Still But Soon I Shan’t Be


Did you feel that surge spread across
the room the sector the city Monday morning
currently rising violently to a foaming shot
over the precincts up against the wall
every body open and quivering despite
the security presence the infrastructure
losing contour losing investors losing coherency
seeping at last into the gaping ear of the social body?

I don’t really understand why there isn’t more fanfare around a new book by Vancouver poet Roger Farr. His latest collection is I Am a City Still But Soon I Shan’t Be (Vancouver BC: New Star Books, 2019), is his fourth full-length title, a collection self-described as a work “in nine Cantos—spheres of hell” that “metabolizes the modernist long poem to provide a new, psychogeographical I-witness account of the post-Real city.” As the back cover offers:

Avoiding the worn paths of the flâneur, Farr works with “pre-conceptualist” footage of Vancouver shot in 1973, later discovered in a dream. New York becomes an “elegant incubator” for the new avant-gardes, who are preparing for another civil war. Berlin is a nightclub, or a mall, that “kettles” its negations. Nanaimo is a necropolis seen through a lens held by the hand of a dead poet. Meanwhile, a statue of Artemis explodes from the streets in Siracusa, setting off a riot during the 2010 Olympics. Throughout, bodies fail to align with their coordinates. Urban streams, floods of capital, and other libidinal “flows” offer multiple routes through the contemporary metropolis. 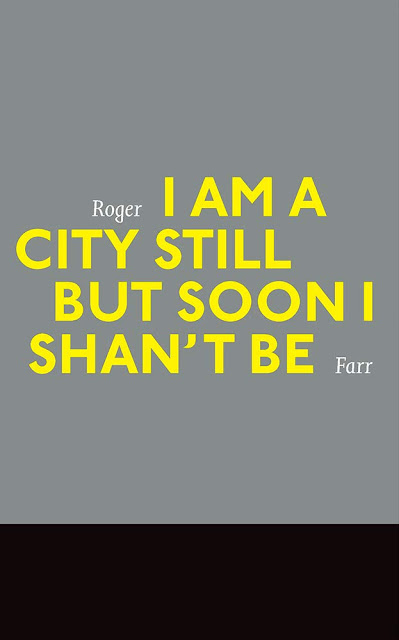 Farr is the author of three previous full-length poetry titles—Surplus (Vancouver BC: Line Books, 2006), Means (Line Books, 2012) and IKMQ (New Star Books, 2012) [see my review of such here]—as well as the editor of a trilogy of texts of contemporary avant-garde poetry: Open Text: Canadian Poetry and Poetics in the 21st Century (Vancouver BC: CUE Books: 2008, 2009 and 2013) [see my review of Vol. 1 here, Vol. 2 here and Vol. 3 here]. Farr’s new book-length epic strolls and rolls across both the real and imagined city, writing out of an engagement with language and social politics central to many poets in and around Vancouver and The Kootenay School of Writing. Through nine sections and nearly one hundred stanzas, Farr writes on and around the immediate of his Vancouver, and how his city connects to multiple other cities. He might avoid some of those “worn paths” the back cover refers to, but his epic still acknowledges those paths as part of their essential structure, working a language epic articulating object and idea, social justice and social action, reference points and the debris of democracy, somewhere between a deliberate dismantling, an ongoing erosion and a willingness to rebuild in an entirely new form.

The Living Room on Powell. I noticed the shit on
the sidewalk became less frequent travelling west
until it just vanished around Cambie not far from
where the squat had been declared a public health
emergency in 2004. This civic septic system may be
Vancouver but the structure of feeling is the same as
San Francisco’s. Across the territories the settler atmosphere
remains stagnant. We enter one operatory or another
Posted by rob mclennan at 8:31 AM
Labels: New Star Books, Roger Farr