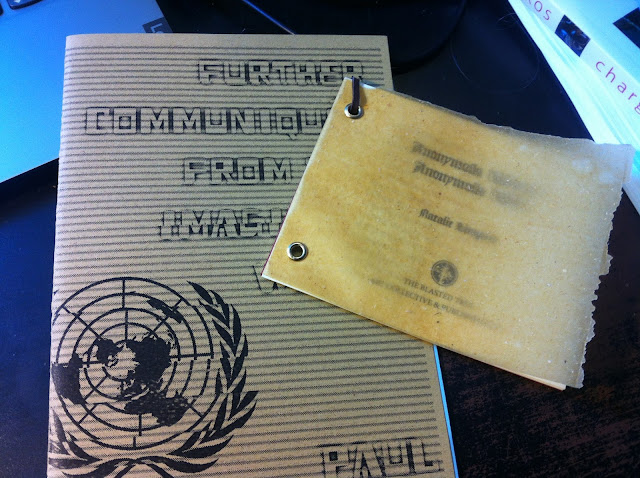 Okay, so the ottawa small press book fair isn’t happening this spring, obviously, which is enormously frustrating, but check out the ottawa small press book fair home edition features I’ve been posting over at the ottawa poetry newsletter with a variety of our regular exhibitors to see what some of them have been up to, and how you might even be able to order some of their fabulous wares! Already posted are write-ups by Amanda Earl on AngelHousePress, Pearl Pirie on phafours and Sacha Archer on Simulacrum Press, with more to come over the next few weeks and months. How long might this go on? Some of us, despite the lack of fairs, are still producing work, after all (see the array of recent above/ground presspublications, for example).

Toronto ON: I recently received a copy of Toronto poet and editor Paul Vermeersch’s chapbook Further Communiqués from the Imaginary World (A Saint Bigfoot Book, 2019), a small item produced in a numbered edition of fifty copies (mine is #36). Did you know he has a selected poems, Shared Universe: New and Selected Poems 1995-2020 out later this year? I was quite fond of his most recent collection, Self-Defence for the Brave and Happy (ECW Press, 2018) [see my review of such here], so would be curious to see the larger shape of his work-to-date, especially how any potential introduction might articulate some of his ongoing themes, threads and concerns, as well as their evolution. As the opening stanza of “REQUIRED MODIFICATIONS / FOR THE TRANSHUMAN” reads:

The next Earth will require more of us.
Give us chromatophores for our skin,
for camouflage, for semaphore;
and long, sensitive ears
to radiate the heat. I want to be
tiger-striped in seconds.
I want to hear you coming first.

The poems in Further Communiqués from the Imaginary World seem to extend from the work of his previous full-length collection, both in subject matter and tone, blending a first-person lyric with an abstract of 1950s and 60s spaceman imagery, absurdity and contemporary pop culture as a way to articulate an increased pessimism. “You must understand that this is what it was like— / it was like this—but this is not how it was.” he writes, to end the poem “SUBURBAN HAUNTOLOGY / KITCHEN WALLPAPER.”

Calgary AB: It has been far too long since I’ve seen a chapbook by Calgary poet Natalie Simpson, and her latest is Anonymous (Widow) Anonymous (Wife), published in a numbered edition of forty-five copies in March 2020 by Kyle Flemmer’s The Blasted Tree. Might I really not have seen a chapbook of hers since 2009? That shocks me, this shift of time. I can only hope that the emergence of one small item might mean the emergence of another small item at some point. The poem collected here is a single piece, existing as a continuous list, as the short note at the back of the small item offers: “This poem names everyone identified as female in the Prosopography of Anglo-Saxon England (www.pase.ac.uk/index.html), which lists each person, along with their status, office, or occupation, recorded in written sources in England from the sixth to eleventh centuries.” Her poem begins: