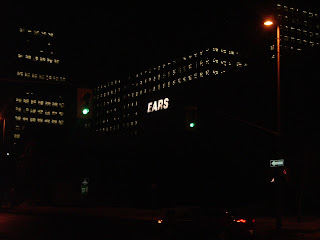 [even the Rideau Centre has ears…] Did you notice that the spring date for the ottawa small press book fair has been announced, happening June 20th? Don’t forget about The Factory Reading Series on March 26th, Paul Tyler and Shane Rhodes. Have you been keeping track, too, of other Ottawa literary events through Charles and Amanda Earl’s work on Bywords.ca? Apparently this website really likes what I’m doing with above/ground press (even though they seem to get much of the information wrong); did you see this kid's paper on John Newlove and Samuel Hearne? Apparently Lea Graham is up to something; and did you see the Ottawa X-Press review my Alberta dispatch collection?

Toronto ON: I recently got a copy of FROM BETROELSE TO CONFESSION (BookThug, 2008), a little chapbook of translations of a Niels Hav poem by Elizabeth Bachinsky, Hugh Thomas, Amanda Earl, Kemeny Babineau, Cara Benson, Jake Kennedy and Kevin McPherson Eckhoff, and P.K. Brask and Patrick Friesen.

BE TRUE OR ELSE

Winter is brutal, eh?
first there until hovering in the tide of forest cakes
far from summer’s hysterical earth gangs
some narrow cans guard signals immoderately

like some kindergarteners often drag altered forest cakes
through the lead stoppers, scampering after tilted trips
from Ford Ltd, the fryer sings a lard opera
till the king’s hulk end is betrothed elsewhere

As the colophon says, “One day in brutal December / BookThugs were invited to translate / a poem ‘donated’ by Niels Hav / as they pleased. This volume contains // the English versions of all who / participated, and ends with the / official translation prepared by / the team of Friesen and Brask.” What makes this chapbook entertaining is not only the variety of responses to the original piece, but the way the concept rides itself out, working homolinguisitic and/or other variant translations against the original piece itself, as well as the “official” translation, without necessarily holding one piece up over another one. It’s almost as though the collection is combining two ideas that have often worked against each other, putting competing considerations of “translation” side-by-side as individual, equal pieces instead of letting them fight it out, thus opening up the idea of translating.

Winter is brutal,
it hovers like a motherfucking
reminder of summer’s hysterical girls-in-shorts
who hang around in gardens torturing me.

Like some kind of lurid alternator always after me, the motherfucker
makes me stutter, it’s the worst kind of scum
that dampens your very soul and slows it down
til there’s an enormous cavernous hole.

Yet, its star undulates over the market; Can mothers
and sisters of mothers clear the mucous
that hangs from my plebian nose
that awaits summer; and all those girls-in-shorts. (Elizabeth Bachinsky)

I’m intrigued by these small publications BookThug makes, apparently available in such small quantities that they make the argument for subscription; otherwise, how would you ever get one?

Edmonton AB: For only her second reading in the City of Edmonton, Calgary poet Natalie Simpson [read her reissued Dirty Work chapbook here, courtesy of above/ground press] launched the small chapbook Bus Plunge (Edmonton AB: extra-virgin press, 2009) as part of her Olive Reading on February 10, 2009. Writing a series of poems bouncing off newspaper headlines, Simpson’s four pieces read as extended lists of phrases that each hold echoes of the same structure as her original lifted phrase, used as title. Played almost as a morbid game, Simpson seems to revel in that place where found material and translated/transported language collide.

Moose reaping its due.

Are you captioned? Learn how.

Cyclist shoring up for ruin.