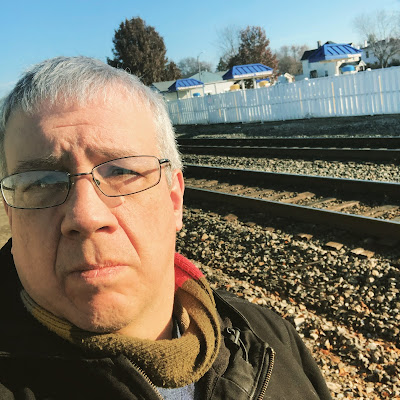 Bill Abbott has been involved in Poetry Slam since 1992 and is the author of Let Them Eat MoonPie, the history of Poetry Slam in the Southeast. He has attended regional and national competitions, hosted three regional events, and organized and hosted poetry events across multiple cities and states. He has been published in Ray's Road Review, Radius, The November 3rd Club, Flypaper Magazine, Jokes Review, The Broken Plate, Ghost City Review, and The Sow's Ear, among others. Having earned his MFA from Miami University in 2018, Mr. Abbott lives in Ohio and teaches creative writing at Central State University.

This book is poetry, and it’s my first actual book (that I didn’t copy at Kinkos) of poetry. I did write a history of Poetry Slam in the Southeast (Let Them Eat MoonPie) a few years ago, but I’ve always been a poet first. This book is a plus for me, but the new work (planned next book) is going in a different direction.

I was always an avid reader, and I never cared about poetry. My freshman year of college, I was bored in my room and existentially in crisis. I grabbed a piece of paper and just started writing poetry. When my roommate came in, he saw it and said, “Oh, you wrote a poem.” I said I didn’t, that whatever that was, it wasn’t poetry. It was, but I only had read the stuff in English class. So I came to it on my own and learned on my own for a really long time.

A poem? An idea is enough, but I really have to get myself started. It’s quick once I start. When I was younger, closer to when I started writing, I wrote often. Now I have to work on starting. But my first drafts are close to my final drafts most of the time, partly because I’ve been doing this for 30 years, and my early work is clearly not as good.

I’m an author of short pieces, but the next book, I’ve known my direction for a while. This book is heavily crafted from my MFA program work (which had no advanced focus), which has been a lot of debt but a new start for my writing.

I love poetry readings. I love reading aloud. But that wasn’t the case from the start. I climbed onto stages in 1992 and sucked at it until 1996 or so. I just couldn’t figure it out until I did. But it transformed my writing, thinking about how a poem sounds.

That’s a deeper question than I can answer, but I’ll try. I’m trying to personalize mental illness, give thought to disability, show people about the burden religion can put on people who doesn’t believe with the majority. And all of my poems don’t do that, but I can see these themes run through.

I’d like to think we’re cultural leaders, and in some cases, I believe that. But I don’t think people fully believe that. Your average person doesn’t often read poetry, though I keep hearing people say that poetry is popular now because nobody has the attention span to read novels anymore. I disagree, but that’s out there.

Essential. Actually, I’m pretty easy to work with, but I think changing my work changes it from stage to page. There’s nothing wrong with that, but some poems edited change from something I’d read aloud to something on the page only. It’s different, not bad, and I’ve been moving that direction anyway.

Enjoy your successes. Don’t get caught up in thinking what you’ll do next to the degree that you’ll not enjoy what you’ve accomplished.

I don’t have a routine, but I really should have one. What gets me moving the most is artificial deadlines. Give me a 30/30, and I’ll do it. Tell me what I need to write by when, and I’ll probably make it happen. If I were writing stories, I’d reconsider that, but poetry writing has always been a “when I feel like it” for me.

I’ve bought a lot of poetry books by others over the years, and one of the best ways to write is to read. I read craft books and poetry books often, and if I forget for a while, I know it’ll slow my writing. I occasionally hear people say, “Oh, I don’t read poetry. I don’t want to have them influence my genius.” That’s nonsense. Maybe if you obsess over one or two writers, that would be a problem, but writers should read widely. There’s no better inspiration for me.

“Home” like where I grew up? I’m not sure I have an answer for that.

I’m not a nature poet, never have been. Music can get me started (I prefer instrumental, especially rhythm), as can visual art. But research does a lot to get me started in writing.

I’m not just a writer. I can’t live off my writing at this point, and I don’t think I ever will. I’ve made my way into teaching college, and over a long time, made a career out of it. If I had gone in a different direction, maybe technical writing or some sort of business work that paid better.

I mentioned how I started writing. I wrote for years so people would listen to me, and I didn’t know how else to make that work. I was better at writing than talking, so I wrote so people would understand. Then, when I discovered spoken word, I realized I could read a poem on stage and have 50 people hear it, as opposed to handing a poem to 50 people, so it made solid sense. And I couldn’t draw, so art was out.

I was really moved by Tara Westover’s Educated most recently. In films, I really enjoyed How to Talk to Girls at Parties, but I love everything Neil Gaiman is associated with.

My next book. I think I’m getting close to a book worth.

Posted by rob mclennan at 8:31 AM
Labels: 12 or 20 questions, Bill Abbott, Milk and Cake Press