Being asked to write the sounds. What is the sound?

Not a lion tamer in the riddle-dream.
Nor a cobra in my mind. Twelve knives
in twelve desks shine.

What did you think, the tongue is a fire?

Last spring, American poet Lisa Fishman and I traded handfuls of our published collections with each other, so it was good to have those works to be able to approach her latest, Mad World, Mad Kings, Mad Composition (Wave Books, 2020). “Spanning 16 years of notebooks, teaching notes, and improvisations,” as the press release offers, the expansive eight sections of Fishman’s Mad World, Mad Kings, Mad Composition are constructed as a wide and sweeping canvas that might encompass and include elements of and considerations around all six of her previous full-length works. Built as a collage, Mad World, Mad Kings, Mad Composition is a book of scraps held together, at times, solely by the fact of the same compositional hand, and includes poems, prose poems, teaching notes, poetry fragments, handwritten drafts, meditations, descriptions and monologues. “I wanted to take the child to a maze / because he likes to find his way through this,” she writes, early on in the collection. In her June 2019 essay for “my (small press) writing day,” she writes about the composition of this new book:

Three years ago, after the publication of 24 Pages and other poems (which went from paper to manual typewriter only, until the publisher took over), I realized I wanted to deal with dozens of notebooks and piles of looseleaf and see what was there. I wanted to type everything and take seriously Viktor Shklovsky’s notion of writing as arrangement, to see how writing that spanned 16 years and was in many cases notational, fragmentary, prosaic, diaristic, observational, might occupy the same space (since it was all from the same life), a space just as subject to change and variability (in form, tone, subject, stance) as a life is. Ultimately, that material became the long book that will come out next August (Mad World, Mad Kings, Mad Composition). It spans the time between 2003, a year before James was born, and 2019. But it’s not in chronological or any kind of order. What is? 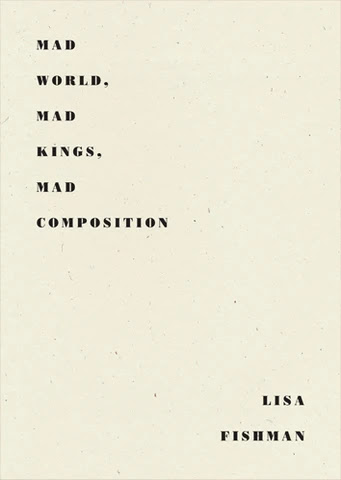 Opening with a quote from Laura Riding, Mad World, Mad Kings, Mad Composition is by its very nature polyphonic, as Fishman knits together a multitude of threads, as much as from others as from herself, bringing in quotes or ideas from D.H. Lawrence and Don Mee Choi and Leonardo Da Vinci and Paul Klee, among so many others. There is something wonderfully connective in the ways the work is structured, disparate and yet held together as a single, book-length unit. There are elements of Lorine Niedecker, as well, a sly camouflage that rises up, as she writes: “Clouds over Lake Michigan can hide all Fools and knaves because their hair is like Queen Margaret’s cow. Ahoy! No more fingers in my ears! A mother dreams of dolphins making noise with their big-eyed bodies.” This is a wildly expansive book, and one that rewards multiple reading. There is perhaps more here than I know what to do with.

On the Beara Peninsula

The shadow of the mountain moved across the mountain quickly, very quickly because the wind was blowing the cloudmass fast, so it looked as if another mountain were forming and disappearing or as if the mountain itself were moving as Dōgen thought: Mountains walk, he said, not referring to geologic processes by which mountains change; both green and white mountains walk. In this case the mountain was running, not walking—its name is Maulin and we may climb it on J’s birthday, before it runs away.