WANTING EVERYTHING: The Collected Works of Gladys Hindmarch, edited by Deanna Fong and Karis Shearer


Years ago, when I complained to Warren Tallman that I’d never be able to write again, he said you’ll have to invent a new form, one that allows for interruptions. (A neighbourhood Doberman and Boss play as I write this – Boss’s neck chain scrapes concrete and their muscly bodies smack.) I didn’t want a new form then. I only wanted two or three uninterrupted hours every day – hours when I was clear – but as my notebooks testify with detail on detail of maintenance (car-teeth-orthodontist-gynecologist appointments-window cleaning) juxtaposed with weather and work as an English teacher: this was impossible. Warren was accurate in his perceptions, but I was unable to say yes, yes you are right. Lars was then three. (“The Silver Notebook,” June 24, 1984) 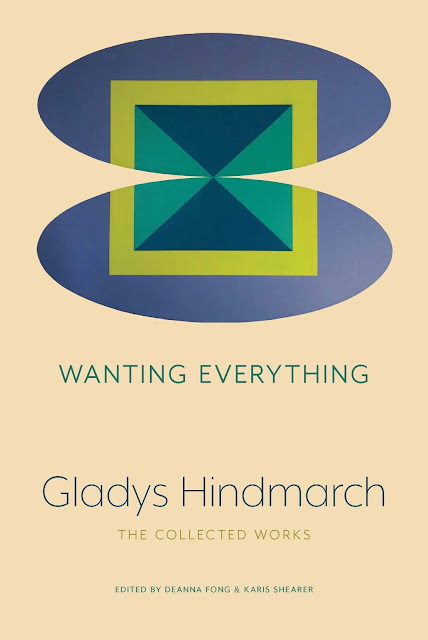 I am deeply impressed by and appreciative of the new WANTING EVERYTHING: The Collected Works of Gladys Hindmarch, edited by Deanna Fong and Karis Shearer (Vancouver BC: Talonbooks, 2020). Long known as a prose writer in a group of poets, Gladys (Maria) Hindmarch was informally affiliated, to my prior and rather limited knowledge, with the 1960s of a loose-grouping of “downtown Vancouver poets,” a selection of writers such as Maxine Gadd, John Newlove, Roy K. Kiyooka and Judith Copithorne that were TISH-friendly, but not directly involved with the infamous poetry newsletter. Instead, Fong and Shearer shine light on just what Hindmarch’s associations, activities actually were, both during those years and since, providing a hefty volume of her writing, both published and previously unpublished, as well as interviews both historic and new, conducted by the editors, and an impressive introduction by both. She may have shared the poetics but wrote, instead, prose, which, along with being female, and a single mother as well, kept the full knowledge of her full participation to the periphery. To open their introduction, Fong and Shearer write: “Gladys Hindmarch’s singular practice as an author centres on writing as a product but as a process – one deeply engaged in dialogue with others, and shaped by processes of revisitation and return. As Pauline Butling writes, in Hindmarch’s prose ‘there is a feeling of everything being present at once.’ In exploring the varied genres represented in this collection – fiction, criticism, journals, correspondence, and interviews – we witness instances of telling and retelling: a redoubling of writing around writing. This unique feature of Hindmarch’s work speaks to her acuity as an observing subject who wants to bring the world around her into writing.”

WANTING EVERYTHING includes Hindmarch’s three published book-length works—The Peter Stories (Toronto ON: Coach House Press, 1976), A Birth Account (Vancouver BC: New Star Books, 1976) and The Watery Part of the World (Vancouver BC: Douglas & McIntyre, 1988)—as well as selections of short prose, excerpts from a variety of journals from 1963 to 1984 (including a selection of entries composed during the infamous Vancouver Poetry Conference of 1963), a selection of correspondence (to Fred Wah, bpNichol, Stan Persky, Daphne Marlatt and others), essays and reviews, a selection of “Oral Histories, Recordings, Conversations,” numerous other occasional writings (including for the 1983 “Women and Words Workshop,” and an impressive amount of previously-unpublished work, including a selection from her “Swimming with Cancer.” As she writes in her “Friends, Parties, Community,” originally published in Open Letter 12.2 (2004):

By then I was twenty-one and was in a circle of writers that included George Bowering, Frank Davey, Lionel Kearns, David Dawson, Daphne Marlatt, Jamie Reid, Carol Bolt, Bob Hogg, Ginni Smith, and David Cull, along with many others. What drew us together in that we liked to write and wanted to share our work. Despite the fact that Frank twice got better marks than I did writing by writing parodies of my works in our creative writing class, we became friends and set up a booth together in the armories on clubs’ day hoping to get enough students to form a Writers’ Workshop and enough money to pay for paper and stencils. In 1960, the Writers’ Workshop began meeting every second week at UBC professor Tony Friedson’s house and was lubricated by gallons of Frank’s sake (most of us were under the legal drinking age of twenty-one). So first came words and syntax, a sense of a person’s voice coming through – such as I had when reading a Bowering story then introducing myself at his table in the old cafeteria on a rainy February afternoon. Then came that quick recognition that we had a common interest in writing, and that we wanted to talk. We didn’t yet have a vocabulary for our aesthetics, but we did have places to gather: classes, hallways, the library, the Heidelberg, the Cellar, the Friedsons’ for workshops, and the Tallmans’ for parties.

A large part of what this book does highlight, and deliberately work against, is the invisible labour of women, providing information on numerous activities that Hindmarch participated in, including her time as part of the second editorial period of TISH, and the complications of attempting to produce work and participate in any sort of literary activity or conversation as a single mother in the 1970s. Despite any of these hurdles, she does appear to have participated in a great breadth of activity (her journals from the events and surroundings of the Vancouver Poetry Conference are quite striking). Throughout her literary and critical writing and commentaries collected in this volume—some four hundred and sixty pages worth—Hindmarch shows herself to be deeply attentive to whatever she set her sights upon, catching what is so often missed, unwritten or simply, otherwise, unexplored. I would suspect that the nature of her writing suffered the same lack of seriousness by some that the nature of her times also prompted, being a woman writing at all, and writing about such subject matters as birth, sexuality, work, parenting and deep attention. In her critical memoir “Friends, Parities, Community,” Hindmarch manages to report on an incredible number of details of the writers around her immediate community of the 1960s and 70s and 80s. I found her reportage of the response to her, prompted, reading the full two hours of “her birth story” (A Birth Account) to fifteen or so people in Fred Wah and Pauline Butling’s Selkirk living room quite striking, remarkable and funny: “By the end, Fred had a headache. So did the other men. They were scrunched into fetal positions. We women were smiling, sitting with our legs wide open, glad that the pushing and breathing were finally over and that Lars was born. Caught in our poses, the whole group of us laughed and laughed.” This is an impressive volume that I didn’t even realize I needed, and one I shall be going through for some time.

She knows that we each make up our own definition of love and then fight to have it our way even if our way is being miserable. She knows that her sexuality is central to loving and that for others this is not so. She knows she can be hurt. She knows she can hurt. She wonders about writing a story about love, all those permutations: a story with the form of Arnason’s 50 Stories and a Piece of Advice. How can she create time to write? What will she not do in order to do it? Today she watched her son play soccer after driving him to the field miles away. When he assisted in a goal, she and his dad and he and his teammates all smiled; then when he scored – he who has never scored in ten years as defence – his face couldnt contain his smile. She felt such pride/love then. Last night while making love with J, making love, not fucking, not screwing, but making love, she wanted to say I love you, but didnt. Happy Birthday, she said after, Happy Birthday. Their four eyes touched almost, heads held ten inches or so apart – just enough to see into each other at that moment not other.