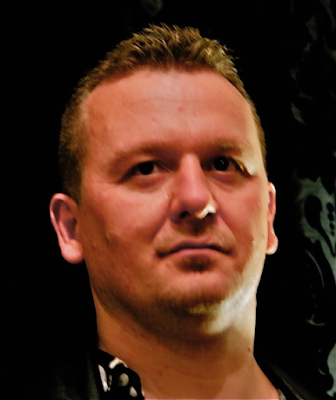 Peter Jordan writes short stories for which he has won many awards.

He is the writer-in-residence for TSS Publishing.

He has an MA from Queens University, Belfast, and is currently taking a PhD there.

I hope it didn’t change my life. There are, of course, greater demands on my time now; promoting myself and trying to sell books, but I’m still the same me. Calls to Distant Places was a long time in the making and I believe that helped prepare me for publication and all of things that come along with that. The collection was originally the creative component of a PhD, and I think I discovered my voice some way through writing it. I also hope that voice is consistent and unique.

I woke up after surgery to remove a brain tumour. I was strapped to a bed — temporarily blind in one eye — and not allowed to move. Also, I have ADHD and back then I was a drinking alcoholic. So, I needed to occupy my time. I asked a nurse for a pen and paper. I had to use a felt tip because I was lying on my back. I started writing poetry at first. Really bad poetry, then I progressed to the short story. When I eventually got out of hospital I continued writing at home. And I found that it settled something within me. It filled some void, quenched some thirst. Eventually, I quit drinking. Huh.

The initial writing comes quickly. And I’m glad of this. In a first draft, I try to remain at the keyboard for at least two hours without interruption. I have trained myself to do this. The first hour is a struggle, then something happens and I’m no longer aware of my surroundings. I’m trying to get to that place where we go just before we fall asleep and all of the answers come. Then I let it compost for days or weeks, before the multiple rewrites. With me, a short story, of any size, can take five, six years, and hundreds of rewrites.

With the short story it doesn’t start with an idea per se — it’s usually a fragment; an image, a piece of overheard conversation. Somehow that then combines with something autobiographical.

On Saturday I was at a funeral and an old friend told me a story about my dad. Dad was standing on a table at a wake telling a story about the deceased (a bit of a devil) who lay in an open coffin beside him. Before he got to the punchline all of the lights went out. The house was suddenly pitch black. Women were screaming and men grabbed total strangers for comfort. It turns out there were numerous kettles boiling, and it set off the trip switch!

I’m now working on a novel. The novel is a different discipline entirely. It comes from something bigger. Usually an idea or group of connected ideas.

It’s crime fiction. And my staccato style is well suited to this genre.

I enjoy readings, up to a point. But I get extremely wired when I do them. Then I’m busted afterwards. So, everything in moderation, and all that. I’ve read in the South Bank, the Free Word Centre, Bloomsbury Group House, and numerous bars and bookshops.

Some people shine at readings; their work is deeply connected to the spoken word. And performance is a big part of their work.

Readings are not connected to my creative process. But I do OK. I spent years in Alcoholics Anonymous. Part of any recovery involves doing ‘a chair’. This requires regularly sitting at the ‘top table’ and talking to a room of recovering alcoholics for half an hour. These people have a low boredom threshold. You learn quickly how to command a room. Or, you don’t.

I don’t set out to try and answer some big universal question. There is, however, a theme in my writing. One I didn’t notice myself. It took a good friend to spot it. That theme is the underdog, the bully, and redemption. Why? Because I have always felt like an outsider. Also, no one is immune to their environment — Trump and Boris Johnson are people I have zero respect for. In AA you learn how to read people: and these two human beings lack empathy; they are consumed by vanity, ego, and defects of character. They are, effectively, sociopaths in suits.

It’s down to the individual writer. If I read something, I want to be taken away from the place I’m in. That’s all.

It takes a long time to find an editor who is sympathetic to your style. A good editor helps bring out your unique voice. A poor editor tries to impose their own voice upon yours. I’ve had bad editors in the past. It’s trial and error. If it’s not working, then get the fuck out!

With regards to writing, and a final draft — before sending it out, put that final draft aside for one day, then list five things wrong with it. You will find these five things.

I try to write every day — and before going on the internet — before the world’s bullshit has tainted my brain. I’m getting better at this.

Hmmm. This comes to mind. It’s odd, but then so am I — I do remember the smell of manure bringing a tear to my eye. The curious thing about living in Belfast is that you are never far from the country. So, yep, manure comes to mind. I was travelling through Texas on Christmas Day — years ago — driving through some small town in the high desert.  I overtook a big cattle truck and I smelt manure. And I got a whiff of that bovine ammonia. Man, the desolation.

I originally took a degree in zoology. That most definitely informs my writing.

Hemingway’s In Our Time. It’s experimental. And he does everything in that short collection. He was a bullshit artist, a monster, and a literary genius.

There isn’t anything else. Maybe working with animals — dogs in particular, would have helped – but I do think I would have died in a drunken accident. It was headed that way, before I quit.

I can’t explain it; I ignored it for years, was desperately unhappy, and a drunk.

Nothing recent compares to The Grapes Of Wrath. I was in my teens when I read it, and it affected me greatly. More recent: Wolf Hall is really good. I think when you start writing properly you become a critical reader and it’s much harder to lose yourself in the words. You are desperately trying to see what works and what doesn’t. When you read Wolf Hall, everything works. The prose is lyrical: emotional, and metred. I love that style of writing.

With regards to cinema, I compare every good film I see to Chinatown. Also, I studied Robert Towne’s script and it’s so good it’s readable. The Blade Runner sequel is good, but I don’t know if it’s great.

A crime novel set in Amsterdam.