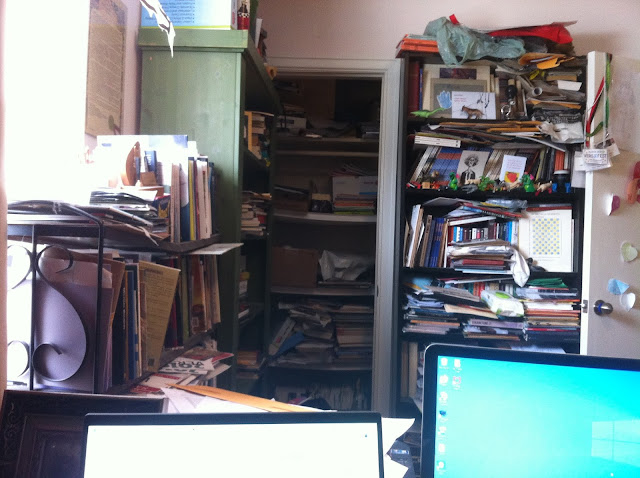 The children have spent the morning setting up what they’re calling their clubhouse, in the centre of our living room, relocating pillows, blankets, and furniture. They remain in the dresses they insisted on sleeping in. Christine makes coffee, far different than mine. I am rereading Emmanuel Hocquard, from Crosscut Universe: Writing on Writing from France (2000), edited and translated by Norma Cole: “The fragment deserves our attention for a moment, if only by virtue of the fact that for some it causes a technical discomfort.”

Our six year old strolls into my office, and asks: “Can I have an apple?”

I was gifted this anthology by Toronto writers Stephen Cain and Sharon Harris, a decade after the book had been published, and I latched onto the prose of Hocquard’s poems, and the shapes of the silence he managed to articulate. As part of the catalogue copy for another of his English translations, The Invention of Glass (2012), reads:

This is a narrative that tries to explain and to crystalize (the fourth state of water) a situation that has not yet been clarified. Under the guise of memory’s particular logic, its play of facets turns to fiction because its sense takes shape only as the series of grammatical phrases unfolds, fusing shadows and blind spots. And yet, like glass, which is a liquid, the poem is amorphous. It streams off in all directions, but reflects nothing. What is the meaning of blue? No one needs to interrogate the concept of blue to know what it means.

I am thinking about silence. And space. And the concurrent possibilities and impossibilities of both, especially while home with two small children. I am thinking of silence, and the gift of silence. I listen for the happy laughter, and the complaints, of our two girls, even amid their occasional interruptions. Before I leave my desk and attend to their needs. An afternoon of crafts, and the possibilities of a walk around the block. Their small boots covered with springtime mud.

Our three year old asks: “Can I have some milk?”

More from work in progress: 1 / I realized then how rarely I thought of other people. The concept was abstract, a part of some other non-monadic world, where multiplicity and the swarm were normal. What did people do with one another?

2 / What was small talk? What was communicated beneath the words they exchanged—in gesture, in glance or stare, in proximity, in display?

From Hocquard’s A Test of Solitude (2000), as translated by Rosmarie Waldrop:

I write that in order to write this.