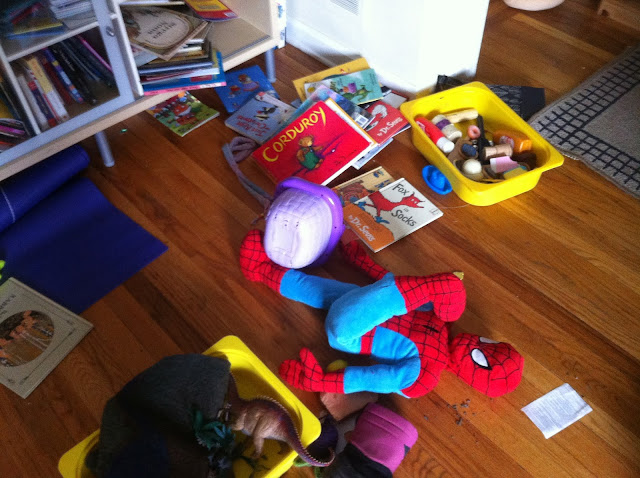 Within an hour or two of waking this morning, Rose begins hiding ‘pretend Easter eggs’ across the house for her sister to find. Aoife hides her eyes underneath my desk in anticipation. Apparently this is the only safe space away from their game. By the end of the week, they’re navigating half a dozen daily costume changes by mid-afternoon, including part of a morning in Christmas pajamas, lunchtime in fancy dress, and a mid-afternoon of bathing suits and life preservers, swimming across the length and breadth of our living room. The house is a mess, but for now, we allow it.

Louise Glück, from “Vita Nova”: “Surely spring has been returned to me, this time / not as a lover but a messenger of death, yet / it is still spring, it is still meant tenderly.”

The snow melts into ponds, and the sun striates through our front window. Our girls barely notice, having been in the house for too long.

Philadelphia poet Pattie McCarthy posts an image of a box filled with found materials, an archive from a series of walks by one of her three children. The attentions here are important, and by not including a description of such here, what might you imagine such an archive might hold?

The poem “Thanks,” by W.S. Merwin, from the Academy of American Poets website, seems to have gained added resonance, as it begins: “Listen / with the night falling we are saying thank you [.]” There is something quite fascinating to see the rise in poems being posted on social media during these shut-ins, although I could easily be caught in my own social-media bubble, predominantly following a list of literary writers, practitioners and enthusiasts that would, of course, naturally be seeking salve through literary works. Where else might we turn, but to books? The resonance is there, and one shared with the daily city-wide applause for front-line workers, including medical staff, heard from balconies and windows across Vancouver, to a similar ‘thank you’ in Montreal, as Martha Wainwright recently led her city in a sing-along of Leonard Cohen’s “Hallelujah.” The widespread acknowledgment of those on the front-lines has been gratifying, especially against the growing understanding of what it is they’re up against, from the numbers of loss, the stories of hospital overflow, and the frightening knowledge of supply shortages worldwide. Merwin’s short piece ends: