how my yt settler mama met my
Chinese immigrant dad

there are different versions of how. I remember my dad telling an exciting story of breaking out of Matsqui Penitentiary in B.C.: scaling the chain-link fence and throwing a jacket over the razor wire at the top so he wouldn’t cut himself as he went over it, hiding out through the night in an itchy haystack in a farmer’s field adjacent to the pen, before running to Medicine Hat, Alberta to seek sanctuary with his stepdad, the only grandpa I ever knew. grandpa Tai ran an antique store right across the street from the Canadian Pacific Railway station and lived in the basement. mom says dad and other prisoners were getting day passes to go pick strawberries in the many berry fields now occupying unceded Matsqui Territory in the Fraser Valley and there was a rumour that these work permits that granted little bits of freedom would be stopped so he ran away while on one, but both stories begin with dad leaving the prison when he wasn’t supposed to and end with dad running to Medicine Hat to hide out at grandpa’s. Medicine Hat, where my mom lived her whole life up to that point. they met at a party.

Vancouver poet Mercedes Eng’s third full-length poetry title is my yt mama (Vancouver BC: Talonbooks, 2020), a continuation of “her poetic investigation of racism and colonialism in Canada.” my yt mama exists as a direct continuation of the work of her prior collection, Prison Industrial Complex Explodes (Talonbooks, 2017), a book that explored the Canadian prison system and systematic racism through archival material and her own biography [see my review of such here]. While that work focused on her father, absent throughout her life due to his incarceration, (thus prompting her book-length exploration of, among other related threads, the Canadian prison system), this collection, in turn, focuses on her mother, writing “when I try to talk to my mom about what it was like / to grow up surrounded by yt people in the prairies / in the 80s though it seemed like the 50s / she tells me in a so-there tone / that Mariah is a mixee and that people love her” (“Mariah according to my yt mama”).

Because I had to look it up (of course, not understanding what the “yt” stood for), I discovered that “‘White’ (sometimes abbreviated as ‘yt’) is a slang term for a white person, often used in a pejorative manner.” As Eng writes in her acknowledgments:

This book is indebted to Lindsay Nixon’s nîtisânak, their phenomenal memoir about queer Indigenous life on the prairies. Years ago I wrote a poem about my mother that I kept returning to, finally seeing what I could grow it into after reading nîtisânak. Also, though I’d seen “yt” used as social-media shorthand, Nixon’s book is the first I’d read that changed the orthography of the word, destabilizing the concept of ytness by frequently naming it, and then changing the spelling of that naming to non-standard English, so I wanted to do that too. Lastly, Nixon’s book reminded me to remember my youth and my queer kin in the prairies, and of what I miss about where I come from: kisiskāciwani-sīpiy (the South Saskatchewan River), the big sky in all its permutations of blue, the wild roses. 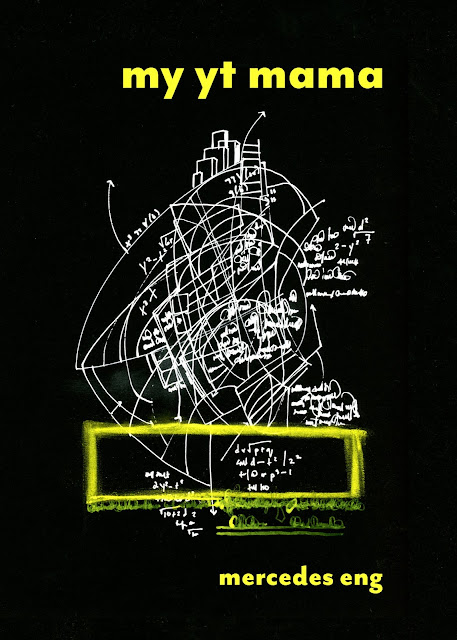 Eng’s exploration of race, colonialism and identity is deeply intimate and deeply personal, as she writes out a layering of trauma for both her and her mother, writing out the disconnect between her and her mother on racial issues, and how trauma is passed and parsed along succeeding generations. Eng’s my yt mama, in many ways, is comparable to Vancouver writer and editor Chelene Knight’s Dear Current Occupant: A Memoir (Toronto ON: Book*hug, 2018) [see my review of such here] for their shared use of poetic memoir to articulate and unpack trauma, including explorations of race and poverty.

Through my yt mama, it is as though Eng is attempting to reconcile what it is she inherited so that she might be able to better navigate her own history and trauma, choose what she is able of what she might retain, and reconcile what she has no control over. Eng writes a lyric suite of what become self-protections upon a body and a self that initially had very little control, writing out how such control could slowly be taken, developed and finally, possibly, achieved. As she writes as part of the extended poem “this body,” towards the end of the collection: “this body is taking space / this body is itinerant / could this body be medicine? / this boxy is indexical / this body is ephemeral / this body is star-seeded / this body is transgressive [.]” This is a dark collection, but one that doesn’t shy away from some extremely difficult material, such as the prose-sequence “the crazy things my mother told me when I / was a kid” that includes:

I remember my mom coming home with a big book of black-and-yt World War II photographs, one of the books the public library was giving away. there was a picture of some broad steps on which a whole bunch of people’s bodies and parts were scattered and there was this disconnected little baby leg with its sock and shoe still on. I was 5, 6 maybe, the pictures of Hitler were scary. he looked really mad and mean like a cop. I remember asking my mom about the war and her telling me about Nazis and how only blond-haired blue-eyed people were desired and how he killed all these Jewish people because they weren’t and I remember asking about me, if he would gas chamber me because I was, after all, part German too

Posted by rob mclennan at 8:31 AM
Labels: Mercedes Eng, Talonbooks