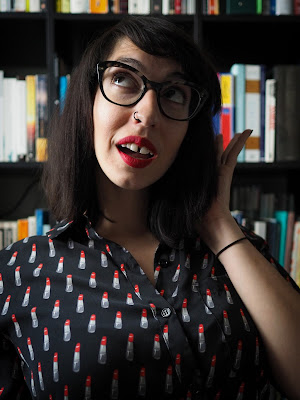 Dani Spinosa is a Canadian scholar and poet. Her work investigates the role of authorship and anarchist politics in digital and print-based experimental poetry. She is the author of one scholarly manuscript, nine peer-reviewed academic articles, four poetry chapbooks, and over a dozen literary publications. She is the managing editor of the Electronic Literature Directory, an adjunct professor of English at York University and Sheridan College, and a founding co-editor of the feminist experimental micropress Gap Riot.

1 - How did your first book or chapbook change your life? How does your most recent work compare to your previous? How does it feel different?
My first chapbook was the first set of glosas I published with no press in 2017. It changed my life, I guess, because someone wanted to "read" or look at my work, and that felt strange because I thought (still think) they were just silly little word pictures. But, it turns out lots of people like looking at silly little word pictures. My forthcoming book, OO: Typewriter Poems (Invisible Publishing), is the edited and more thought out version of that early work. So, it's different in that that first no press chapbook was my first foray into sending the glosas out in the world. But, they are the same project in that they will always feel tentative and unfinished, just how I like them.

2 - How did you come to poetry first, as opposed to, say, fiction or non-fiction?
I came to poetry through a high school English teacher named Glenn Hayes. And he loved poetry in a way that didn't feel elitist or fancy. He loved it with his heart, with his body. He helped us make a poetry magazine at our high school and he made it seem cool. In fact, it wasn't for a long time after high school that I realized how totally weird we were. But the magazine was cool, and so were Mr. Hayes's bohemian days where we didn't have to wear our uniform, and so was the presentation assignment we did where we impersonated a poet and I came to class acting like Anne Sexton. So, I never really thought about fiction or non-fiction. I fell in love with poems, with poetry, in high school and we've been pretty monogamous ever since.

3 - How long does it take to start any particular writing project? Does your writing initially come quickly, or is it a slow process? Do first drafts appear looking close to their final shape, or does your work come out of copious notes?
The project itself is slow to start, mostly because I have to convince myself it's worth doing. The glosas started as a post-it note that sat on my desk for weeks, and then one poem, and then that poem sat around forever, and then... eventually, two, three, four poems. Once I convince myself the project is good, they just roll out. I can sometimes do seven or eight in a day if I'm feeling the project. Once I finish digitally editing the poems the first time, I rarely ever revisit them. In fact, editing OO with Gary Barwin was the first time I really went back and edited this vispo at all. I like sending out first drafts, imperfect things. It's who I am.

4 - Where does a poem usually begin for you? Are you an author of short pieces that end up combining into a larger project, or are you working on a "book" from the very beginning?
I'm pretty much always either working on a book project from the very beginning. If I'm not, then I'm doing little one offs like the Mariah Carey series or the "Chant Uhm" sound poem. Otherwise, I like working towards a larger project. I need to see an end goal or I'm piss poor at productivity.

5 - Are public readings part of or counter to your creative process? Are you the sort of writer who enjoys doing readings?
Oh girl, I like to be at a mic for any reason. I like to think about how I'd read my poems to an audience as I write. I like to pretend I'm giving readings when I'm home alone. I like to be on stage and, for the most part, I think people like coming to my readings because I'm really silly. Also adorable.

6 - Do you have any theoretical concerns behind your writing? What kinds of questions are you trying to answer with your work? What do you even think the current questions are?
With OO, I was asking the question: how can I love and hate a tradition at the same time. I'm working on a new project, feminist responses to Greek mythology, and my question has become: how does a femme move in a book, in a story? how does she get stuck?

8 - Do you find the process of working with an outside editor difficult or essential (or both)?
I was really scared of it at first. But, working with Gary Barwin on OO was wonderful. He pointed out things in my poems I didn't realize were there, and he pushed me. And also, like, this girl likes some validation, so that was nice. I think editing is just one more version of connection, conversation, community. So, for me, it was essential. It changed how I viewed the poems a bit.

9 - What is the best piece of advice you've heard (not necessarily given to you directly)?
In an episode of What's the Tee with Michelle Visage, RuPaul said, basically, "Do you want to be right? or do you want to be happy?" And that's good advice for life, for sure, but I also found it so useful for writing. I write now until I'm happy with what I'm looking at, and I'm not so worried about the work being "right." It's been liberating. All my most important life lessons have come from RuPaul Charles.

10 - How easy has it been for you to move between genres (poetry to critical prose)? What do you see as the appeal?
VERY DIFFICULT. Poetry makes me hate writing criticism. Criticism makes me miss writing poetry. I think the answer here is that I'm over academic writing, but maybe I just have to find a critical voice that is more like, more informed by, my poetic voice. If I have either of those things at all, that is.

11 - What kind of writing routine do you tend to keep, or do you even have one? How does a typical day (for you) begin?
I don't have any routine, girl. I write when and where I can. When I'm contract teaching, I never know what my schedule is going to look like. So, I write when I can, and when I have a project I'm working on. Today, for example, was a writing day. I woke up, decided on the poems over coffee, went to the library, grabbed another coffee, wrote the first draft of the words to about six of them, and then got sucked into a bunch of busy work before I took out the typewriter. So, I'm answering these questions in the hope that they bring me back into the poems. If that doesn't work, then it's more coffee and one more try. If I still can't find the shape of the poems by 4:00pm, I'll give up, smoke a bowl, and watch Drag Race.

12 - When your writing gets stalled, where do you turn or return for (for lack of a better word) inspiration?
Coffee. Bowl. Drag Race.

13 - What fragrance reminds you of home?
OH GOODNESS WHAT A QUESTION. I feel ashamed to have the most stereotypical answer, but... meatballs in my mom's sauce. Nothing smells more like home than my mother's homemade meatballs. She bakes them on cookie sheets, and as a kid I vividly remember standing with her in the kitchen picking pieces of fat off the cookie sheet and eating it with my fingers. I can smell the sauce in the background, the salt, the basil. Oh man, I am so hungry right now.

14 - David W. McFadden once said that books come from books, but are there any other forms that influence your work, whether nature, music, science or visual art?
MUSIC. Much of OO was written while I listened to The Burning Hell's "Fuck the Government, I Love You." Much of my current myth project is being written with Bikini Kill's "Feels Blind" on repeat. I also like reading books about music to inspire me. I just finished Carrie Brownstein's Hunger Makes Me a Modern Girl and am re-reading Sara Marcus's Girls to the Front. So, I guess that's still books, but I think it counts.

15 - What other writers or writings are important for your work, or simply your life outside of your work?
Wordsmiths & Thinkers who are in my mind or heart right now: NourbeSe Philip, Canisia Lubrin, Maria Sabina, Stephen Collis, Billy-Ray Belcourt, Robert Duncan, Elena Ferrante, Audre Lorde, bill bissett, Maggie Nelson, Kai Cheng Thom, J. R.Carpenter, and John Cage (forever and ever, amen).

17 - If you could pick any other occupation to attempt, what would it be? Or, alternately, what do you think you would have ended up doing had you not been a writer?
I always wanted to be a massage therapist, but I have very weak wrists and arms and also a very weak entire body. BUT, if I had started training to be strong and to know and care for bodies like that, I imagine that would be a gratifying occupation. I also think I'm particularly well-suited to be a bored suburban housewife that runs some kind of perverse underground sex club; I really love the idea of running a clandestine sexual underbelly for a conservative-looking community. I suspect the ship has sailed for that opportunity as well, but a girl can dream.

18 - What made you write, as opposed to doing something else?
At the end of the day, I just love poems, and I got really lucky that I had enough time/money/privilege/support/community to see poetry as a thing I could do.

20 - What are you currently working on?
I'm working on this series of poems about women (mortal and divine) in Greek mythology who are stuck in some form or another. They're typewritten and digitally altered and read through pornography. You can find snippets of it in ToCall, Train, and a pamphlet from Happy Monks with more on the way as soon as I... you know... finish them. I'll keep you posted. ;)