Adam Clay, To Make Room for the Sea

There is night and there is night,
though neither are good or bad.
A mark of punctuation through
the face—a slash, I think, like how
the reality of breathing means less
than how we do it. Deeply
in a debt of feelings always, how
to bicycle to work in the rain and show
up dry and happy not like a tick
stuffed on blood, but a lion starved
after week upon week of animal
loneliness? It wasn’t a slash; it
was an exclamation point
void of enthusiasm, a failed
attempt at willing a person back
to life. I’m carried away so much
these days the smallest gust could
pick me up, set me down
in a new town, with a new face,
a new pattern of shapes. 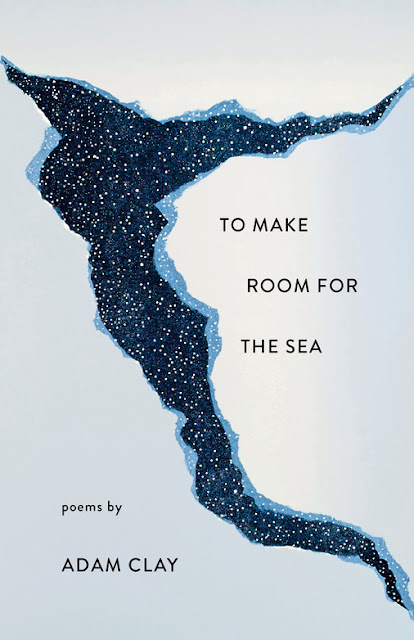 Southern Mississippi poet, editor and critic Adam Clay’s fourth full-length poetry title is To Make Room for the Sea (Minneapolis MN: Milkweed Editions, 2020), following on the heels of The Wash (Parlor Press, 2006), A Hotel Lobby at the Edge of the World (Milkweed Editions, 2012) and Stranger (Milkweed Editions, 2016). The poems in To Make Room for the Sea do feel a continuation of the work in Stranger, as Lucia Moreno, in New Orleans Review, writes to open an undated interview around that previous collection: “Close examination may be how poet Adam Clay approaches the world, but his time seems consumed by continual movement.” Clay’s poems move through and across meditations on moments small and large, intimate spaces and deep thinking, composing a taut line between abstract thought and the very specific. As the opening of “Meditation for the Silence of Morning” reads: “I wake myself imagining the shape / of the day and where I will find // myself within it. Language does not / often live in that shape, // but sentences survive somehow / through the islands of dark matter, // the negative space often more important / than the positive.”

The poems throughout the collection appear to have resonance with the current climate, writing on uncertainty and American upheavals, in poems such as “America” and “State of the Union,” that includes: “One may start / to look inward, but the notion of working together /does not always assume the slow pace of the ritual.” There is such a lightness to his lines, tapping across such incredible depth, such as in the meditative sequence “Understories,” including this excerpt, the fifth of eleven sections:

A branch does not require Herculean greatness,
but the tree does it anyway.

Somewhere ants parachute, aloft
with their lack of attention. Where they land,
the narrative need not notice.

The poems are open, searching, seeking; poems that seek to properly consider and reconsider, to see where we currently are, and try to understand how to get to where it is we should be headed. There is such detail to Clay’s lines, working both ends of the spectrum, what Natalie Shapero refers to on the back cover as “its exquisite collage of major and minor,” and seeing just how those two extremes interconnect. He speaks in intricacies, and how what we might consider as separate or distinct are so deeply intertwined. As Clay speaks to the poems in Stranger, as part of the interview conducted by Moreno:

Like any great change, there is a time of adjustments. Some are easier and some are more difficult—but most aspects of life are like this, right? The poems in the collection attempt, at least on some level, to reorder, to readjust, and to reexamine life after transition or change. I found poetry to be the perfect form to do this, if only because I rarely know where my poems are going when I start writing them. The writing process became more about discovery, for me, than anything else.