Two spent pistols made
made-up holes on
the body, and a poem in your
pocket home (“VII,” “THE LAST POEM OF HAMISH BALLANTYNE”)

Mike Cavuto finds songs to make country a possibility. A country of now, a shared heredom (a word associated with Kenneth Irby and his enfolding of attention to country rites). Attuned to the great West Coast poet Joanne Kyger, Mike writes “we are the minds of this country.” He works toward a sense of in-betweenness. A noetic weaving together of sources across geographies. Cities are points of transaction, and the spaces between go into the person, the lyric channeling of something old and hick, good in every way.

There is something of Cavuto’s lyric comparable to the work of his co-hort, Vancouver Island poet and translator Hamish Ballantyne (who has a debut chapbook newly out as well, also produced by knife|fork|book) for the ways in which the lyric is set on the page, the way the rhythms between the two intersect, and the density of small moments. The connection between Cavuto and Ballantyne are clear, as one becomes aware that the two are founding members of the pure-sound collective Sex Panic!; and then, of course, there is Cavuto’s nine-poem sequence that opens the second section, “THE LAST POEM OF HAMISH BALLANTYNE,” that ends: “all those // holes in the story, parts of / the plan — // We left unknown.” For all the references we, from the outside, might not necessarily catch between the two collaborators and friends, structurally, certainly, they exist as two sides of the same lyric, which is quite interesting to see from this particular distance. There is also something of Robert Kroetsch’s “Country and Western” (a section of his Completed Field Notes) to Cavuto’s poems as well, although perhaps no more a connector than the words and the idea, an image of the mid-west, whether American or Canadian, that sets ablaze far more abstracts than specifics, even for myself, the product of an eastern Ontario farm. As Dale Martin Smith tells us: “Country is home. And it’s gone. Country is a place in temporal location. It is the apprehension, a going through, of song.” 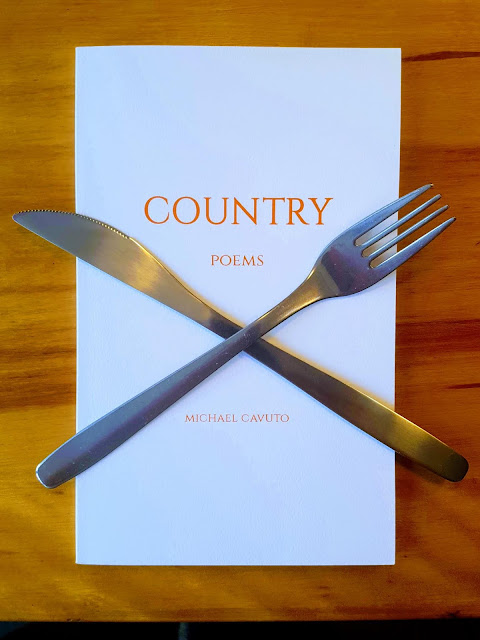 His poems spark, and amble, composed as small lyric spaces and small lyric bursts that accumulate into sequences, or simply sit as explorations of single moments, as the sequence “LOST FIELD” writes: “old words // easy to forget // Picine // that hard sharp beak [.]”

The collection is set in four sections—“LOST FIELDS,” “COUNTRY POEMS,” “GIFTSONGS” and “PYRE”—the final of which has extended into further pieces, “PYRE II” (Touch the Donkey #21, April 2019) and “PYRE III” (Touch the Donkey #23, October 2019). As he discussed the series in his interview for Touch the Donkey, the poems are composed annually, as “a kind of elegy.” “I began these poems as one would stacking rocks for the dead, and I return to them each year to witness their change.” The poem opens: “Throbs of words // This is a swelling / These are heaps [.]” It writes of mourning-as-accumulation, setting stone upon stone as an ongoing gesture, an elegy that attempts to mark not a single passing but multiple. I’m curious to see how this so-far-ongoing series of annual compositions fit into any further of his full-length collection, perhaps akin to Gil McElroy’s long-ongoing “Julian Days” sequence which, to date, is included as a section in each of his own trade poetry collection. Does this suggest Cavuto’s work as an expansive field, or a sequence of threads, of which “PYRE” is but one? As Cavuto offers as part of his Touch the Donkey interview:

When I started writing the Pyre poems two years ago, it was in the space of a very important poet’s passing, and I was taken up with the poem’s particular capacity for remembering – so in that way, the first Pyre poem was a kind of elegy. In writing through an experience of poetic memory, I engage with a distinct kind of time unique to poetry.