Dear Current Occupant—House we all shared on Forgotten Street

Ten people in a three-bedroom upper suite. Vancouver Special. The walls covered in tiny fingerprints. Bugs in the bed, crumbs on the stove, broken Transformers and Lego pieces, and Cheerios and dirty mismatched socks scattered on the beige carpet. I kept my small treasures under my pillow. We were visitors there. On a small couch with sixty dollars under my pillow, I slept. Never saw the shadow of a body get closer. Never saw her walk away when she had second thoughts at the last minute. Never felt the hand that reached underneath my head. Never felt the tingling of fingers accidentally grazing the small hairs behind my ear. Never heard the rustling of bills between sly fingers. Never woke up to see the sadness in the whites of eyes or the remorse as she placed the money in her pocket. Never saw her turn back and double-check that I was still asleep and maybe even feel sorry enough to offer me a short, warm kiss on my cheek or tuck the edge of the blue blanket into the crook of my sweaty neck. I didn’t wake up in time.

The latest in Book*hug’s essais series is Vancouver writer and editor Chelene Knight’s Dear Current Occupant: A Memoir (Toronto ON: Book*hug, 2018), a creative non-fiction lyric exploration of her years growing up through the twenty houses she eventually lived in with her mother and brother in Vancouver’s Downtown Eastside. The short prose-sections of Dear Current Occupant work through poverty, dislocation and racism (as a mixed East Indian/Black child), attempting to capture the nebulous idea of home her experiences provided. Composed as a series of letters, predominantly written to the current occupants of the variety of buildings they lived in, from rentals to squats, Knight displays, with a deceptive ease through some remarkably difficult material, how it might be possible to acknowledge and explore one’s past without being overcome by it. As is already obvious, this is a book about survival, and Knight does so honestly, unflinchingly and gracefully, and yet, there remain elements that any survivor can’t help but carry, reminiscent of British writer Jeanette Winterson, when she wrote of her Pentecostal mother in her own, more straightforward memoir, Why Be Happy When You Could Be Normal? (Knopf, 2011) [see my review of such here]; Winterson’s mother would regularly lock the young Jeanette out of the house overnight, causing her adult self to still keep her own kitchen jar perpetually ajar. What does the idea of home mean to someone perpetually in motion? At the opening of the “Endnotes,” Knight writes:

home. A one-syllable word like walls, doors, and roof. A house. Something many of us take for granted. I was drawn to the concept of home and belonging for many years, and bits and pieces of both came to life in my first book, Braided Skin (Mother Tongue Publishing, 2015). After this dip-my-toes-in-the-water book, I saw an unfinished thread poking out from within the pages, a story, a missing piece that needed to be told in another form, another book. Dear Current Occupant has been in the works for many years, even before Braided Skin, but it took that first book to pave the way. It took reading and listening to many other voices speak of home and lack thereof for me to start piecing together the fragments of home I have so desperately been looking for.

Genres are crossing, bending, merging, melting, and morphing into new subgenres, and this is what happened with Dear Current Occupant. And just like genres, the same can be said when it comes to belonging—the bending. I can never let go of the bending. The squeezing to fit into a place, a home. How many doors have to slam shut? How many windows can I look out of, trusting that the view will remain the same? 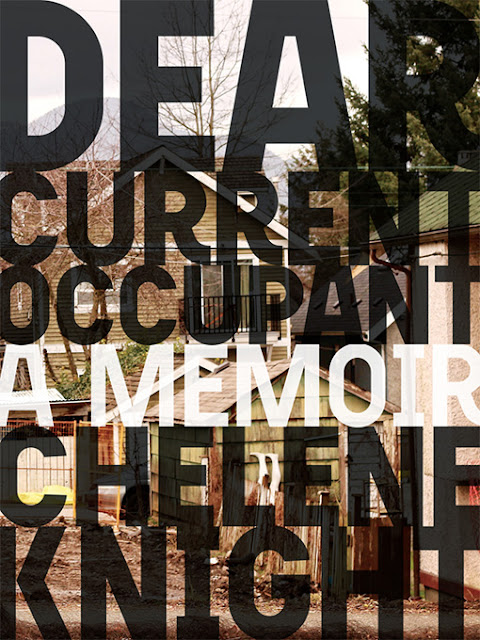 The book exists in short bursts of prose, composed akin to a series of photographs; not composed in any particular order than that of memory, moving through and across time, experience and stories as they occur, from having to move suddenly, and with no more than what she could carry, to her mother’s continued drug use and an adult stranger’s hand upon her knee. As she responded as part of an interview with Amber Dawn for PRISM International:

Trauma affects memory. Memories are fragmented, distorted, unorganized, cracked, so that’s how I wrote the book. I thought about the ordering of the sections, which piece would lead into the next and why, but not in terms of chronological time. There were two sections I wanted to act as book ends, and I needed it to be clear that I was an adult in these. In the first piece, I am an adult going back to one of the old places and the young girl I am watching is me. I am in a non-verbal, observant conversation with myself. In the last piece, I am moving out of the last house I lived in with my mother. And I am writing to her, but I am writing to myself.

As much as this is a book of survival, part of the strength of this work is in knowing just how little the perspectives within have been explored, knowing that there are most likely numerous children who have been raised and perhaps still exist in poverty and uncertainty, whether in Vancouver’s Downtown Eastside, or anywhere else. What makes this book so engaging is in knowing that Knight writes from a perspective built from the inside, and not from the outside, peering in; and knowing that she managed to pull herself out, and not only survive, but thrive. And, throughout the events described in her memoir, this is a book that works, just as much, to honour the strength of her mother, writing: