About mid book - the very one you are holding I read about “Hazel Mayhall, lowly negative cutter,” then I search her and I can’t find her anywhere at all. It’s Hazel Marshall Stephanie later explains when my computer visits her computer. I wrote it wrong and I decided not to change it. So I search her and there she is in a piece in the Times about the history of stock footage in films and how Hazel Marshall invented the concept (& the business) in the 1920s when she worked as an editor at Paramount. Since she was always approached by people for what was essentially stock footage, B rolls she told the studio that there could be some money in this and Hazel also created the system for filing and organizing and preserving stock which they began charging for by the ten-foot segment and in today in video it’s by ten seconds. And to really think about what Stephanie Gray’s doing in this book I’m going to leave Hazel right there at the center of things. Shorthand and Electric Language Stars I think is an alright title (it’s growing on me) but I think it would be a great title for a film and much of Stephanie Gray’s training is there. She asks brooding questions in her poems and sometimes the question is her title. I don’t think it entirely matters where her question lands. What if there was another internet, is one such title and the comma is also there having landed somehow as a fly. I don’t think these things are managed by disregard nor would that describe Stephanie’s casualness in regards to Hazel’s name. Her approach is more like an inexactness that holds intimacy close like we’re all in Stephanie’s cutting room. I tried to find a picture of Hazel Marshall and what I found instead (because of the misnaming) was a picture of Stephanie and several full-faced women who could have been ay of the Hazel Mayhalls who died in the 20th century in the Midwest or possibly Canada. Big women. This endpoint of my search produced a kind of zany melancholy which is a nice film mood to be wallowing in. And the notion of stock footage reminds me of stock characters of which this book is also full. What abounds is the spouting of stock characters:

You didn’t stay till the end? I couldn’t get out of there…And I was like
OMIGOD…You think I was born yesterday. (Eileen Myles, “‘To Crop the World a Million Times Over’: Stephanie Gray”)

I may be late to the game, finally going through my copy of New York poet and filmmaker Stephanie Gray’s Shorthand and Electric Language Stars (Portable Press @ Yo-Yo Labs, 2015), a book that exists in a space occupied by both writing and image. Subtitled “Poems, Film Stills and Photographs,” Gray’s collage-project also includes both an introduction to the book (by Eileen Myles) and an afterword, focused on Gray’s filmmaking (by Ariel Goldberg), working to firmly place this collection, it would seem, as an equal blend of poetry and film project, and to really articulate how much the two genres are linked in Gray’s ongoing work. As Goldberg writes; “This need to alter my environment in order to appreciate Gray’s films speaks to how hard it is to do what Gray does: to pick out from our various urban cacophonies, to write poems, live, visually.”

your control of the lower registers is flawless,

the static is enduring, the tracking is scintillating, blurring your flawless lower registers, ka-ching, ka-ching, ka-ching, suddenly all at once, a path is revealed, a window is opened, it got me from point A to point BE is all you need to know, another level of the sublime skirting through, more than the skirt that slipped through the subway grated crack, the high heels you said you’d never wear ever again after the grated teeth ate one and you went to work, snuck in, with pantyhose toes and slipped on extra shoes under your desk, we opened up the instinct, we dragged the palm key down to key of the lowest C, don’t you see, we controlled the lowest of the low, the registers felt like Mt. St. Helens times twenty but nothing moved, nothing shook, we knew it was flawless but had to do it without lava, without ash, you know the bullhorn was what would carry you through another day of this BS, BS meant to orchestrate yr flawless control of the lower registers but you’d already carried them so high, their low-ness highness would never fall down again 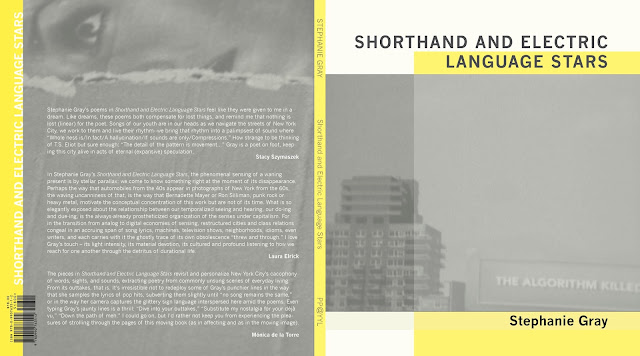 Self-described as “diaristic,” Gray’s work appears deeply intimate and personal, and even communal (of the community, moving throughout her neighbourhood and city), utilizing material from her immediate, but managing to do so in a way that is both revealing and sideways, bringing out elements that are entirely unexpected, twisted or accumulative. The author of a small handful of poetry books and chapbooks prior to this, including A Country Road Going Back in Your Direction (Argos Books, 2015), Place Your Orders Now! (Belladonna*, 2014), I Thought You Said It Was Sound/How Does That Sound? (Portable Press at Y0-Yo Labs, 2012), and Heart Stoner Bingo (Straw Gate Books, 2007), the Poetry Foundation website describes Stephanie Gray thusly: “Stephanie Gray is a poet and filmmaker known for short Super 8 films that explore the experience of urban space and gentrification, queer identity and feminism, and disability and class.”