“Do you know that it really could be cool
and hot, if we two could cross-pollinate,
could hug and dance and not be home too late
we could forget the past and start anew.”
“I don’t mind if youth lead the movement, and
let us steep our old riffs in their new sounds
never as new as they might think, and round
us, to glow a soul we can understand.”
“You lost me with youth,” “I bet I could be
a kickass step-dad,” “You know you must drum
a goofy & humble tune to win me.”
“I’ll listen and follow.” “As long as some
room’s left for deep clean oceans, I can come
back I always will.” “I love when you hum.” (Chris Stroffolino)

I’m always pleased to see a copy of FENCE magazine, a biannual journal of poetry and fiction produced out of the University of Albany. The latest issue, Vol. 18, No. 2 (summer 2017), includes an editorial by Rav Grewal-Kök speaks of the difficulty of the tasks of reading, editing and writing since the American federal election:

Not that you have to be an immigrant. Anyone who is at all concerned about racial justice, women’s rights, reproductive rights, queer rights, indigenous rights, the labor movement, anti-Muslim bigotry, the prison-industrial complex, public schools, clean air and water, the climate catastrophe, health care, child care, poverty, hunger, student debt, foreign wars, torture, scientific research, arts funding, or a hundred other causes must recognize that we are living through an emergency. The bad news doesn’t stop. Of course, some tens of millions of my fellow citizens may view the present situation differently—just enough of them certainly voted differently—but I don’t know anyone who hasn’t felt, at various times since the inauguration, soiled, exhausted, and overwhelmed.

He ends his introduction by writing:

In rereading the fiction printed in this issue, I’m not consoled. I just feel more like myself. Aren’t all these gestures—reading, writing, editing—also reminders that another life, an intimate life, still exists? I don’t think it’s escapism to reserve a space for gratitude. I will forget that truth, perhaps as soon as I finish writing this note and look at the day’s headlines. So I will have to find a way back to remembering again.
It has been worse. It will get worse. Let’s go on. 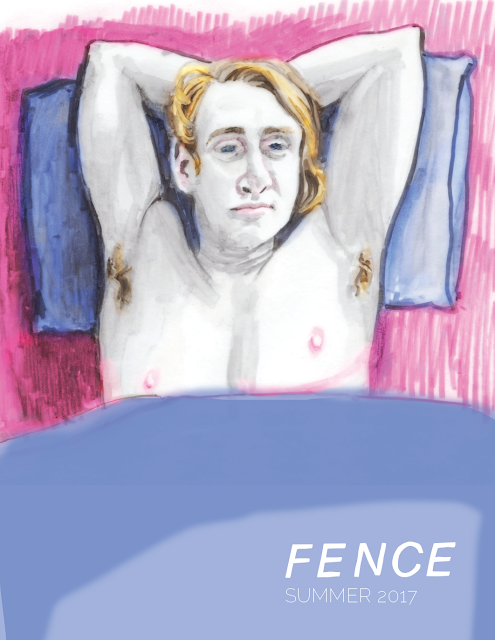 Editorials such as this remind me of the multiple ways in which I am buffered from certain parts of Grewal-Kök’s concerns (I live north of the border, for example, but I know I am not entirely unaffected). I too, am troubled, and have lost sleep and work. What choice have we but to continue, and to resist, and to voice those anxieties, in part to better learn ways in which to resist, and to remain both healthy and sane? And even during periods of madness, can’t one take comfort from seeing those who have persevered through and even despite the madness, providing an example of how it is the rest of us can continue as well? Something I’ve been appreciating about the editorials of FENCE magazine [see my review of the previous issue here] is in how they have been attempting to engage with certain of the anxieties and conflicts surrounding culture, both abstractly and very specifically, and I applaud how they voice their concerns as part of a larger dialogue.

FENCE has long been one of my favourite North American literary journals, not just for the variety but the strength of the material they include, and part of the highlights of this issue includes my introduction to the works of incredible writers such as poets Tom Haviv, Aaron Coleman and Katie Fowley, and fiction writer Noy Holland. Brooklyn poet Tom Haviv’s “Didactic Poem” appears to be part of his first trade collection, A Flag of No Nation, a book newly out and one that engages with documentary and narrative poetics and performance through a sequence of inventive lyric sequences. Aaron Coleman’s prose sequence “Shadows Uplifted,” subtitled “A TRANSGRESSIVE TRANSLATIONOF FRANCIS HARPER’S 1892 NOVEL IOLA LEROY, OR, SHADOWS UPLIFTED,” moves across the page in a curious combination of collage and absence, shifting sections in a compelling use of white space and very specific, seemingly erratic, movement. Katie Fowley’s two poems included in this issue engage an accumulative precision that is really quite breathtaking, and quite compelling. Fiction writer Nov Holland, the more established writer of this quartet, has three very short stories included in this issue, and I am curious to see what else she has produced; as part of his introduction, Grewal-Kök writes: “What I would still give for an ear like Noy Holland’s, who sings of beauty and love right at the edge of the abyss.”

Bluebird day, a fine day to fly. They taxi out, no radio, roiling dust, the airport bleak and uncontrolled. A vulture stands on the head of a cactus and displays its wings to dry. “What’s he waiting for?” the instructor jokes. Of course he’s flirting. Horny, disappointed man, too tall to fly the fighters and color blind besides. He calls her Sunshine. A face like sunshine. First the climb, full on, the big blue he can’t see. She’s to stall, spin, recover. Pretty, a lay, college girl. She lives behind the hangars in a school bus. She turns the plane upside down. Everything in the cockpit is a missile now, launched, flying at their heads. Wallowing, sloppy, sickening plunge—the altimeter sweep, the stick clutched in her hands. “IT’S MY PLANE,” he shouts, meaning, let go, fool. That we may live. May we seem to have lived. He sees again the spines of the cactus, the meaty face of the vulture, ravenous, a dream. Bitty Cessna, yellow as the dress his mother wore. Mother war. Mary. Gone to God. Mine. (Noy Holland)

Over the one hundred and fifty-plus pages of the current issue, there are certainly more highlights, even if I choose but to begin with four from writers I hadn’t been previously been aware of (there isn’t space to discuss everything). I would certainly point out new poems by Jasmine Dreame Wagner, Carmen Giménez Smith, Rusty Morrison, Daniel Borzutzky, Kelli Anne Rufle, Marty Cain and Hazel White, as well as fiction by Hilary Plum and Yanara Friedland, as well as the striking artwork both within and on the cover by Buzz Slutzky. The real question becomes: exactly why aren’t you already reading this journal? And then there’s this short poem by Jason Mitchell, included towards the back of the issue:

I found two aubergine
Amethysts tucked inside a crushed

Velvet pouch on one of the trails while
Hiking in the rain, and took it as a
Love charm and good sign, and the one

In the palm of my hand, and read into
The event as the small stone being you
And took that as a good sign too.