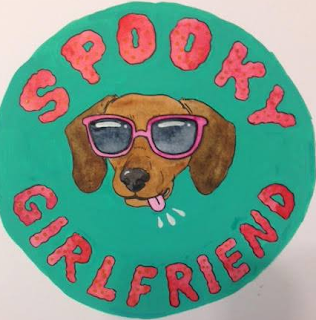 Nate Logan was born and raised in Indianapolis, Indiana. He is the author of four chapbooks, including Post-Reel (Locofo Chaps, 2017). His work has appeared in a variety of journals including BOAAT, Forklift, Ohio, and Ninth Letter.

1 – When did Spooky Girlfriend Press first start? How have your original goals as a publisher shifted since you started, if at all? And what have you learned through the process?
Spooky Girlfriend Press started in the winter of 2008 in my basement apartment in Moorhead, Minnesota. My initial goal was to publish work by female-identified poets from the Midwest (minus our first title), but in short order that expanded to include female-identifying poets from across the United States. I've learned it takes sheer will to persist--the world at large is antithetical to small press publishing and probably poetry more than the other creative writing genres. It certainly is a labor of love.

2 – What first brought you to publishing?
The excuse to start the press stemmed from a long poem (50+ pages) I had written that I knew would never be published in a magazine. Even then I knew this was shady, but really I only did it to get the press off the ground because I did not have any chapbooks lined up out of the gate. In my defense, I only think I ever sold one copy of my chapbook and quickly was able to really start on the goal I had set out for the press.

3 – What do you consider the role and responsibilities, if any, of small publishing?
I think small presses have the responsibility of being advocates for the marginalized voices in society. Small presses are where the weirdos hangout (and I mean weirdos in the best way). Since last year's election results, small presses, maybe now more than ever, help serve as the artistic resistance against the administration. While we haven't done any explicit political chapbook, we did start a journal, Killjoy, as a means to resist.

4 – What do you see your press doing that no one else is?
This is a hard question to answer. I think there are a lot of presses who certainly do more than we do. We're a pretty small fry. I guess I would have to say making a pizza poem anthology was something no one else has done? And there's a new series we've started that publishes two poem chapbooks? We're also hoping our next single author chapbook has some kind of audio element to it.

5 – What do you see as the most effective way to get new chapbooks out into the world?
While we have a fondness for the physical book in hand, e-publication is definitely more effective and immediate. We only have limited experience with this, but our new series is going to be exclusively published online, so we'll get more practice.

6 – How involved an editor are you? Do you dig deep into line edits, or do you prefer more of a light touch?
I have been very fortunate in that the poets who've trusted their work with the press have all been easy to work with and wonderful writers. I engage the light touch while editing, usually only commenting on things to make a manuscript more uniform (the Virgo in me). I only usually go in for deeper edits if the poet has a particular concern.

7 – How do your books get distributed? What are your usual print runs?
Besides Getting Lucky and Stone Boats, all of our titles have been print-on-demand. Usually a pre-order will go up and once the book is ready, I'll have a bulk number shipped to Spooky Girlfriend HQ, package them up, then mail them.

8 – How many other people are involved with editing or production? Do you work with other editors, and if so, how effective do you find it? What are the benefits, drawbacks?
For most of the press's existence, it's just been me. The amazing poet Laura Theobald was kind enough to be an assistant editor for a few years and it was so nice to have someone to bounce ideas off of and someone who was talented at doing book design. She is so great.

9– How has being an editor/publisher changed the way you think about your own writing?
This is an interesting question. I'm not sure it has changed how I think about my own writing. If anything, it has just given me a richer awareness of the breadth of poetry as it exists now.

10– How do you approach the idea of publishing your own writing? Some, such as Gary Geddes when he still ran Cormorant, refused such, yet various Coach House Press’ editors had titles during their tenures as editors for the press, including Victor Coleman and bpNichol. What do you think of the arguments for or against, or do you see the whole question as irrelevant?
Like I alluded to in the first question, I did use my own work as the spark to start the press, just so I'd have something to start with. In general though, I find this practice to be on the shady side. I mean, to give oneself editorial power is already an unbelievable act of ego and having writers trust you with their work, to believe in what you're doing, that's enough for me. I think Reb Livingston said something about if you don't believe in your own work, how can you expect anyone else to, and I understand that argument, too. And I think this argument is stronger if you are LGBTQ, a woman, from a traditionally marginalized population. For me though, a white, cis male, there have always been venues for me, so I would not do this now.

11– How do you see Spooky Girlfriend Press evolving?
Though poetry chapbooks remain at our core, I feel like we've been evolving steadily. We published an anthology chapbook, a chapbook of non-fiction, we've started a new two-poem chapbook series, etc. Being able to publish more would be a nice evolution to go through.

12– What, as a publisher, are you most proud of accomplishing? What do you think people have overlooked about your publications? What is your biggest frustration?
I'm extremely proud to have published Nicole Steinberg's first full-length collection. As for overlooked things, I think some of our titles have gone under the radar for whatever reason (see: IS TO : AS : IS TO by Cecily Iddings / READ IT) which can be a bit disheartening. My biggest frustration is not being able to properly compensate our authors and the lack of funds to attend book fairs where we can get more exposure.

13– Who were your early publishing models when starting out?
Bloof Books was and continues to be a huge inspiration for us. dancing girl press was also an inspiration for us as we basically borrowed our mission statement from them.

14– How does Spooky Girlfriend Press work to engage with your immediate literary community, and community at large? What journals or presses do you see Spooky Girlfriend Press in dialogue with? How important do you see those dialogues, those conversations?
We mostly do this engagement through our Internet presence, most often through our Facebook and Twitter pages. We try to promote our authors the best we can, sharing their readings or work that's recently been published. Unfortunately, we're located in a pretty quiet place, literarily (?) speaking, so there aren't too many opportunities to promote ourselves locally, but we try. As far as dialogue goes, I think we are in conversation with presses who pride themselves on being feminist in nature. They are important insofar as that their, and our existence, highlights just how underrepresented women continue to be in the small publishing world.

15– Do you hold regular or occasional readings or launches? How important do you see public readings and other events?
Oh, no. But I wish we did. Naptown is not a hotspot destination for such things. Most of our authors live on the east coast, anyway. We've been fortunate to participate in some readings at AWP; those are probably the largest profile readings we've done so far. We'd love to go to some smaller book fairs and run a table / host a reading. I think they are really important and are usually a fun time.

17– Do you take submissions? If so, what aren’t you looking for?
Nope! We solicit all our titles (minus our 7" Single Series, which has its own particular rules).

18– Tell me about three of your most recent titles, and why they’re special.
“ghazal with the city sparking” by Emily Corwin b/w “The Seven of Cups is a Dialogue Between Yourself and Images” by Jennifer MacBain-Stephens /// Our most recent title, the first in our 7" Single Series (an online, two-poem chapbook, highlighting the work of two poets). This is special because it's the first one in this series and I've been a fan of Emily's and Jenny's work for a long time and was so happy when I saw they submitted something for the open call. I think these are just two really great poems that compliment each other well.

What Urge Will Save Us by Alina Pleskova /// I like to think that SG is open to all kinds of work, that the press isn't narrowed down to one kind or type of poetry. Alina's chapbook is one that I had never read before--I mean that in the way that the vividness of the language and the story that these poems tell had me engaged from page one. Yes, there have been poems written before about intimacy and finding oneself in the midst of it, but Alina's work made those ideas new for me. Emily Dickinson's line about reading something and feeling as if "the top of your head were taken off," this chapbook is what that means.

Libido by Cathy de la Cruz /// Cathy is a triple-threat talent wise and I'm so glad she trusted us with her work for her first chapbook and our first e-chapbook. This is another chapbook that discusses intimacy, but in a very different way from Alina's. Cathy's work is just as effective though and hard-hitting in the feelings it evokes. "Something, Anything" will stop you in your tracks.