Tender Buttons was created in a time of radical awakening to feminism, and its complications in regards to race, class, sex, gender, and being “avant-garde” each of which had complex truck with official literary culture.

I remember Harryette Mullen’s Trimmings and how she played with the impulse of the source text of Stein’s poem Tender Buttons to make it completely her own.

I remember the storms of necessary debate Trimmings stirred up, pitting the efficacy of straight-forward political poetry versus poetry which operates on the level of language itself. Like most things, I don’t see it as two poles of “either or,” but as an opening for multiplicity, as are all Tender Button titles in their specific way.

What happens when women get together and take the mode of production into their own hands to create their own terms for living and existing? (Lee Ann Brown, “INTRODUCTION”)

The six hundred-plus pages of TENDER OMNIBUS: The First 25 Years of Tender Buttons Press: 1989-2014 (New York NY: Tender Buttons Press, 2016) includes Bernadette Mayer’s Sonnets (1989), Anne Waldman’s Not a Male Pseudonym (1990), Harryette Mullen’s Trimmings (1991), Agnes Lee Dunlop Wiley’s Agnes Lee (1992), Rosmarie Waldrop’s Lawn of Excluded Middle (1993), Hannah Weiner’s silent teachers   remembered sequel (1994), Jennifer Moxley’s Imagination Verses (1996), Dodie Bellamy’s Cunt-Ups (2001), Laynie Browne’s Pollen Memory (2003), India Radfar’s the desire to meet with the beautiful (2003), Michelle Rollman’s The Book of Practical Pussies (2009) and Katy Bohinc’s Dear Alain (2014), as well as “an Introduction by Founding Editrix Lee Ann Brown.” As the website informs: “Tender Buttons aims to publish the best in experimental women’s writing. […] The poetics of all Tender Buttons books gives rise to an extraordinary range of innovative forms and modes including conceptual projects, cut-up, the boundary between life and art, documenting consciousness, refrigeration of poetic form, radical intertextuality, the question of generations and generativity and how to write against, out of, and around another’s writing.” An incredible collection that deserves to be on multiple course-lists, TENDER OMNIBUS: The First 25 Years of Tender Buttons Press: 1989-2014 highlights both the work of the press and the authors themselves, all produced in part to shift the perception of literature as male-dominated, as Katy Bohinc, “Star Arkestress, Tender Buttons Press,” writes in her “Preface”:

Without a proper history, how can we think about what poetry is? How can we say avant-garde isn’t a spoken-word poem that derives from an ingenious secret-code Underground Railroad song? How can we talk about “what’s modern” when what’s not white & male is barely in the conversation? And how can we look our daughters in the eye and say “sorry, there aren’t any books your color.” 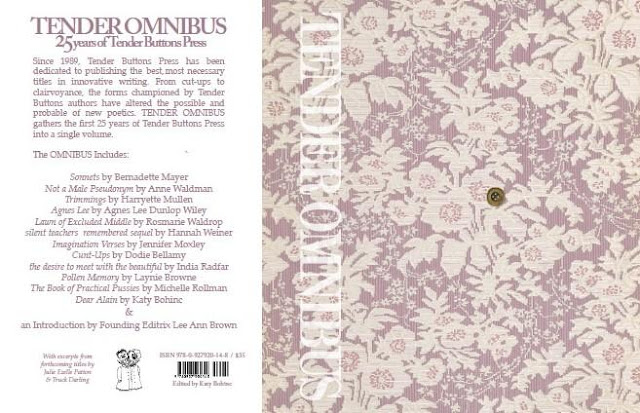 Even if you haven’t read most of the works in this anthology, the individual titles have become well-known, even classic, texts by now-prominent American writers, most of whom are still producing stunning works of literature. The only Canadian comparisons I can make to this collection is the anthology series that Michael Ondaatje began for Coach House Books (1979), that Sharon Thesen continued via Talonbooks (1992, 2001)—The Long Poem Anthology—or even Michael Barnholden and Andrew Klobucar’s Writing Class: The Kootenay School of Writing Anthology (New Star Books, 1999), curated volumes acknowledging multiple entire works of contemporary innovative poetry that deserves to remain in print. The anthology highlights, also, through producing a volume of, as the website for the press suggests, its entire back catalogue, the stunning curatorial vision of the press, one that is fierce in its choices, even if occasional in its appearance. Having produced only a dozen titles in twenty-five years, one wonders if the press deliberately works to produce a new title only when something of incredible value comes along, or if there are other factors in play? Given the strength of the work collected here, i would suspect it is worth keeping an eye on the two titles that the anthology lists as forthcoming, suggesting classics even before they’re produced: Julie Ezelle Patton’s B and Truck Darling’s The Hunger Notebooks.

The concept of an inner picture is misleading. Like those on the screen, it takes the outer picture as a model, yet their uses are no more alike than statistics and bodies. Figures, we know, can proceed without any regard for reality, no matter how thin the fabric. True, the missing pieces can be glued in, but if you look for the deep you won’t frighten your vertigo away. An ambition to fathom need not hold water. Stay on shore, put on more sweaters, and let the roar of the breakers swallow your urge to scream. If not the clouds themselves, their reflections withdraw with the tide. Then there is the familiar smell of wet sand and seaweed, debris of every kind, including hypodermics, condoms, oozing filth. My outer self comes running on pale legs to claim my share, while my inner picture stands dazed, blinking behind sunglasses, demanding a past that might redeem the present. (Rosmarie Waldrop)