I was driving the wrong car, for some reason got stopped by the police, had to look for car documents, found only multiple old wallets and worn-out purses no matter where, the glove compartment, the well between the front seats, and I did search everywhere—but no registration, no identification, no license. Fed up by this intensifying failure to find what I needed, I was compelled to wake. I’ve got to get out of this year, and seal it by putting a swath of clay over the pages, slip, glaze and irregularity. I need to start a new year now. The date is wrong, but I am ready.

So what if I am having an aesthetic crisis. Who cares? The doppelgänger used to be a very popular idea of how to feel. “The progressive” has devolved, in my time, from the desire for (illusion of) imminent revolution to the struggle simply for memory. That happened in forty-five years (plus or minus) of my simple simple life. Can you imagine how that feels? I don’t think so. Right now, 2014, life has an odd tense peacefulness. Does it? That is what’s called “privilege.” “The borderline between a pile of refuse and an artwork was never more than obscure.”

A volume in her ongoing “interstitial” books is American poet and critic Rachel Blau DuPlessis’ latest poetry title, Days and Works (Boise ID: Ahsahta Press, 2017). According to the press release, other titles in the same suite include Interstices (Subpress, 2014), Graphic Novella (Xexoxial Editions, 2015), Numbers (forthcoming from Materlialist Press) and Eurydics (forthcoming from Further Other Book Works). From her trilogy of critical essay collections on gender and poetics to her long poems spread out over multiple volumes – the twenty-six years of Drafts (1986-2012) “in 114 cantos” and her “21st-century long poem” Traces, DuPlessis is one of the very few contemporary poets who sees their work in a sequence of individual and extended threads over multiple volumes. As she writes as part of her “Extended Author Bio”: “But fundamentally, the long poems, the serial poems, the book-length works show a desire or drive to be endlessly making something ‘all about everything,’ inside poesis itself. The desire to be in your own poetic universe, to create a parallel world of form and word accounting for this world, are the pursuits that pursues you. The blessing is poesis. Who can want to mark or to experience ‘the end’?” In her “Author Statement” included with the press release (which can also be found online) she writes:

I’ve always been quite smitten by collage (as a modern visual art practice), and I try to make a parallel dynamic page space in all my poetic work. Then about ten years ago, I began extending my own poetic practice by sometimes making collage poems, or visual texts with writing. This was a big step into a hybrid mode. Days and Works is a poetic work with smaller texts not just cited in them, but glued, in their original form, onto the page. Bits of newspaper articles on many topics—advice, ecological crises, human kindness, human horrors, cosmological thinking about the origins of our universe, questions of economic crisis and poverty—all these topics and more come into the text, most often as a parallel bit of text, interrupting something else and complicating it. Sometimes you can’t tell which is the “central” text—it’s all happening simultaneously, all days and the workings of various events. My intention in placing clippings with poems is rarely ironic (contrasting ideal and real, for instance); it’s more like the bewildering interest of “all these things happening inside the same moments” (and on the same page). It is literally dazzling (awesome and awful)—and precisely this double feeling leads to the meditative intensity of this work. 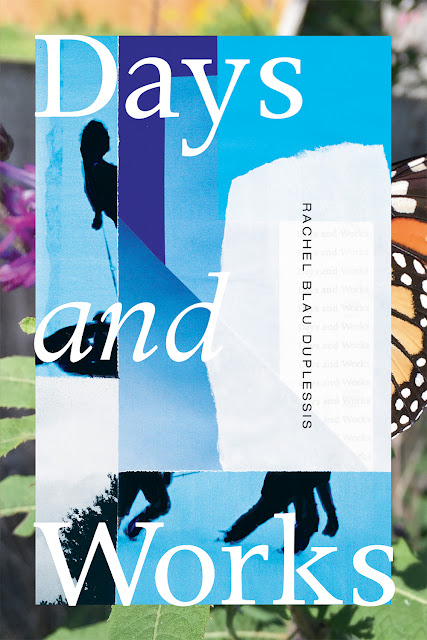 The effect of Days and Work is curious, almost as a blending of what Susan Howe does in her poetry collections, except without the separation between her prose and her cut-up poems, stitching together the cut-up elements of archive, newspaper reports and her own prose. Writing on creation and movement and theory, Days and Works appears, in structure, far closer to the collage than the hybrid, as DuPlessis composes short bursts against incorporated material that both give the suggestion of linear connection and the effect of disjointed, discrete and even overlapping threads. As she writes:

Thus the necessity for exegesis. And the expectation of surprise. The God of the Covenant was way into drapery, color and texture, into that extra inch of braid on priestly robes, a band alternating golden bells and pomegranates, and into the color of the curtains on His Ark—purple, scarlet, blue. All those details will hide the Hidden with the lavish redundancy of the aesthetic. And all these things—they made this creature more than just Command. More—well, picky. Odd. More duplicitous. More beautiful and more suspect. Quirky and problematic and queerish and moody.