Rusty Morrison, Book of the given

Exposing the seen: a book of snapshots

Beware nostalgia’s elaborate snare – its tempting surfaces of gloss will tighten time around us. Each morning, I hold aloft an infant image of us, as you baptize her new again. Let stillness fall from her, I chant, ripen her vulnerability. The revival music you are playing on our old jukebox is luring an unusual number of souls from my secret neighborhood. 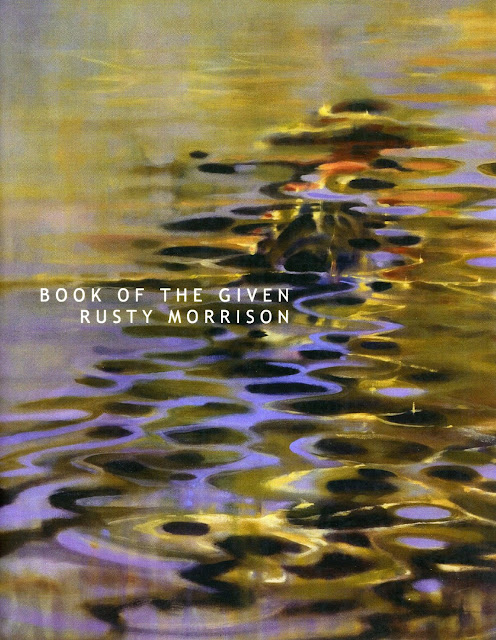 I only recently picked up a copy, so I’m a bit late to the game on Berkeley, California poet and publisher Rusty Morrison’s collection Book of the given (Las Cruces NM: Noemi Press, 2011). Composed as a kind of call-and-response, she alternates, five against five, short lyric sequences against trilogies of self-contained prose poems, writing on intimacy, sex and the pure landscape of the interior, all while moving through and with lines by the late French philosopher George Bataille (1897-1962). I’m fascinated by the way that Morrison incorporates Bataille’s lines, and Morrison’s lines move in a combination of music and water, an uninterrupted, continuous lyric flow that is quite lovely to imagine read aloud. In my copy, an underlined passage from “Sentenced by the script: Bataille” reads: “Eroticism as seen by the objective intelligence is something / monstrous, just like religion.” Earlier in the same sequence, I’m also struck by: “The way my hand must remove its layer of invisibility / to touch your face. I want to touch it. / To make that want, to meet it / is something monstrous, just like religion. Eroticism and religion [.]” Attempting to look up information on the book online, I wonder: why did this book not receive more attention?

I am nearly sick with child-haste.
Where have I put her this time? Doll in a box. Doll
in my lips, belly, breasts?
She’s gone.
What will I offer you now? Nervous as a kneeling supplicant
at the bishop’s door. Bishop
in both of us, brooding, turning
his eyes round me as though I were the trick of perspective.
Every object I am
is the rupturing it is built on

– still you don’t understand, though I come dressed
in several hints. My little song-skirt, call it
rhythm-to-tear-its-own-seams with,
set to the tone poem of odorous ripening. I make you
a little noise in my throat, under-heard,
which increases its intensity in proportion to

my feigned disinterest. (“Assembled by the script: Bataille”)