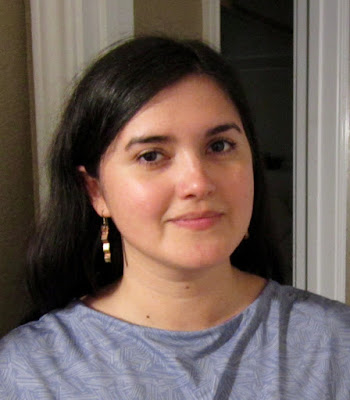 1 - How did your first book or chapbook change your life? How does your most recent work compare to your previous? How does it feel different?
My first chapbook gave me the sense that my writing in graduate school "mattered" in the sense that they were publishable, and my second and third chapbooks continued that trend: they were each collections written while I was in graduate school. Meanwhile, most of my individual poems accepted for publication in journals have been written post-MFA (I graduated in 2013). Where I did my MFA (Texas State University) is a three-year program, so I was able to evolve my writing with that amount of time: my writing mid-MFA onward to now, while different in some ways in terms of subject matter, contains threads of the experimental and what I think of as more "normative" writing.

2 - How did you come to poetry first, as opposed to, say, fiction or non-fiction?
I think I started attempting to write poetry while a teenager because I liked that word choices mattered; I think I felt like I could more openly be "clever"/witty through a poem's speaker; I think I also liked the feel of instant gratification compared to the months/years fiction can require.

3 - How long does it take to start any particular writing project? Does your writing initially come quickly, or is it a slow process? Do first drafts appear looking close to their final shape, or does your work come out of copious notes?
I tend to have projects in mind: the main challenge for me is to convince myself that, yes, this time of day/night is a fine one to start back to work. Once I start a poem, I tend to finish it within an hour; I'll revise as I go along, playing with form, line breaks, and word choices. I'm generally not into extensive revisions/multiple drafts--if that's needed, I think I might as well write a new poem.

4 - Where does a poem usually begin for you? Are you an author of short pieces that end up combining into a larger project, or are you working on a "book" from the very beginning?
There are poems that I write as individuals, and there are poems that I write intended for a themed project. Many of my poems begin with inverted expectations or something startling/unusual.

5 - Are public readings part of or counter to your creative process? Are you the sort of writer who enjoys doing readings?
I enjoy doing readings, but I feel bad because I've been mostly hermitting myself with how busy I've been in the past year or so. What I mean is, it feels hypocritical to not make it up to friends' readings but then have a reading. I don't live in the city where the readings I know of are occurring; I have a forty-five minute drive ahead of me during those times I do attend. So of late, it's been mainly guilt and needing to make use of "off" time to rest and perhaps write that have kept me from readings.

6 - Do you have any theoretical concerns behind your writing? What kinds of questions are you trying to answer with your work? What do you even think the current questions are?
At times, I like pushing concepts of what is poetry and where poetry can come from (particularly in my constraint-based erasure works, which have ranged from using psychology textbooks to Star Trek: The Next Generation episode scripts that I gathered into a blog, which also pushes against the concept of a book by countering a book's sense of singular chronology; in the blog, as there are various ways to read the posts [by tagged theme or character speaking], there are multiple chronologies). In these constraint-based erasures, I'm concerned with how my text, though with the same building blocks of the original, forms into having its own DNA; I don't want the results to just be a parody of the original, though there might be some satirical elements. I have also been experimenting with making puns be acceptable/affect the metaphysics of a poem.

7 – What do you see the current role of the writer being in larger culture? Does s/he even have one? What do you think the role of the writer should be?
In general, the role is having vision. Specifically, that could mean being observant about present situations of society. That could also mean looking forward to what is possible and pushing humanity toward its positive potentials.

8 - Do you find the process of working with an outside editor difficult or essential (or both)?
Besides some minor things when finalizing my chapbooks, I haven't experienced much active editing work.

9 - What is the best piece of advice you've heard (not necessarily given to you directly)?
I'm thinking of the advice that Susan Wood gave in her poetry workshop at Rice University, advice that quickly made me a better poet (this was my first workshop). The advice was that you need to discover something while writing the poem, that you shouldn't go into the poem already knowing where it is going and forcing it to remain on "track." It needs to evolve, shift--if you aren't surprised at some point when writing the poem, your reader will not be surprised (making for dull reading).

10 - What kind of writing routine do you tend to keep, or do you even have one? How does a typical day (for you) begin?
While I have written at all times of day, usually I'll find myself writing at night. I like it best when my brain is close to dreaming.

11 - When your writing gets stalled, where do you turn or return for (for lack of a better word) inspiration?
I'll reread my most recent poetry and busy myself with submitting poems, which requires me to read the journals to which I'm submitting to get a sense of what their taste has been like lately. I may also watch science programs or read weird-but-true types of news in order to experience some of the sublime that'll push me into having something interesting to say.

12 - What fragrance reminds you of home?
"Home" is a challenging concept for me as a dual citizen and someone who moved around a lot growing up, and the sister of fragrance, taste, is a bit more alluring to me. I'll say the smell and taste of farofa (farina of cassava cooked, ideally with some roasted garlic in there), a Brazilian side dish, makes me feel at home.

13 - David W. McFadden once said that books come from books, but are there any other forms that influence your work, whether nature, music, science or visual art?
Science, especially chemistry and physics. Psychology as well. These taught me precision of word choice as well as the importance of words relating to each other.

14 - What other writers or writings are important for your work, or simply your life outside of your work?
James Joyce, Paul Celan, the Oulipo, Christian Bök, and Lyn Hejinian's Language of Inquiry are the main ones that come to mind at the moment.

15 - What would you like to do that you haven't yet done?
Maybe continue a project I started back around 2014 involving color and addition of letters to source texts.

16 - If you could pick any other occupation to attempt, what would it be? Or, alternately, what do you think you would have ended up doing had you not been a writer?
Around the same time I started writing attempts at poetry, I was a chemistry nerd in high school; I attended the NASA Summer High School Apprenticeship Research Program. I was accepted to Rice University as an engineering student and took organic chemistry my first semester. While science intrigues and engages me, I felt a huge hole that semester as I grappled with how much poetry should be significant to me; I had been thinking I would keep it as a hobby, but I felt a pain. In the lab, I had strong feelings that this wasn't the place for me; being a primarily logic-driven person, this intense emotion dumbfounded me as I found myself crying into my goggles; I next had a sort of vision of myself being an English professor, and I felt a strong sense of peace that allowed me to finish the experiment. I dropped the lab, but at the time I still wasn't sure about becoming an English major; it wasn't until the next semester that I accepted the transition for myself and became an English and Philosophy double major. If I had not had the drive for poetry, I would have probably become a chemical engineer.

17 - What made you write, as opposed to doing something else?
The activity that has fulfilled me almost as much as writing in recent years has been doing powerlifting (squatting, bench pressing, and deadlifting): like writing, it can be solitary, focused work that requires patience and may never feel fully "done" (there is always a feeling of striving to lift more down the line or manage another set next week), and it is rewarding as you do get what you put into it, and to be successful you do have to engage in self-care (sleep enough, eat enough, try to minimize stress). I admit my powerlifting has more routine in my life than my writing lately; I like managing my time more intuitively/as I go along in terms of writing time. What writing gives me that powerlifting doesn't is, of course, the ability to play with and examine language.

18 - What was the last great book you read? What was the last great film?
I'm fairly easy to please regarding films, so I don't know that's worth mentioning, but books would be the tougher one. I have trouble with designating "favorites." And my memory for chronology of recent readings is kind of bad right now.... Normally summer is my downtime, but instead I've been doing more teaching.

19 - What are you currently working on?
I'll mention two projects I've worked on on and off since 2015.

One, which I'm calling "pH of Au," is a manuscript feeding off of my thinking of the implications of gold—chemically, alchemically, and personally. In writing these poems, some of my focus has been on colonial Brazil and modern day Brazil (my other country of citizenship; as I received my education in the US, it's been important to me to try to learn Brazil's history--an ongoing effort).

The other project is "Mosquitos and Jesus," which is a constraint-based erasure of Bart D. Ehrman's Misquoting Jesus: The Story Behind Who Changed the Bible and Why; I'm going through the book, page by page, and each page serves as a word bank for a brief, numbered section of a developing long poem. The tone is meant to come across as prophetic but at times cynical and pseudo-parable. While I think of the title as "Mosquitos and Jesus," I'm not sure if I should submit it as such: I don't want to sound possibly offensive (though I'd think that'd be a reach); I don't want to sound religious either (I'm not). I've alternatively called it "M & J" though that's cryptic.

Other than occasionally working on these, I write individual poems as the feeling strikes me.