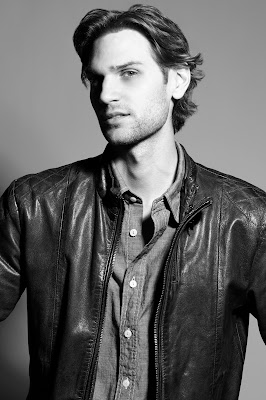 Matthew Hittinger is the author of The Masque of Marilyn (GOSS183, 2017), The Erotic Postulate (2014) and Skin Shift (2012) both from Sibling Rivalry Press, and the chapbooks Platos de Sal (Seven Kitchens Press, 2009), Narcissus Resists (GOSS183, 2009), and Pear Slip (Spire Press, 2007). His work has appeared in many journals and anthologies, has been adapted into art songs, and in 2012 Poets & Writers Magazine named him a Debut Poet on their 8th annual list. He holds an MFA from the University of Michigan's Helen Zell Writers' Program where he won a Hopwood Award for Poetry. Matthew lives and works in New York City and you can visit him online at matthewhittinger.com.

1 - How did your first book change your life? How does your most recent work compare to your previous? How does it feel different?
The poetry world loves a debut, so I enjoyed the buzz around Skin Shift. Plus it took so long for my first full length to get published after years of being a bridesmaid that I think the biggest change was internal: a sense of relief, a slight freeing up of brain space to move on to the next project, being more relaxed about getting work published. I still have to hustle--I got too comfortable with opportunities coming my way that I forgot I had to work at making them happen too--but my general attitude toward it all has changed. I'm less pre-occupied/consumed by it all.

The Masque of Marilyn is smaller in scope than The Erotic Postulate's sexy art and geometry romp or the sweeping myth and genre reinventions that went on in Skin Shift, but similar in a couple ways. My interest in exploring and playing with form continues, from my favorites like dramatic monologues and villanelles and calligrammes to ones I set, such as the opening poem which uses anagrams of Marilyn's name to drive it along, or the periodic table of elements in the imagined exchange between Marilyn and Marianne Moore. There's always a heavy visual element to the presentation of my work on the page, but there's a bit more white space/breathing room this time round. My obsession with mythology and myth-making also continues, particularly transformation myths, though I've chosen just a single subject, Marilyn Monroe, to explore this time. I'm drawn to how we construct self-mythologies, so that internal will and magic Norma Jean used to conjure Marilyn fascinates me. And also how it became more and more difficult for her to do so toward the end of her life.

2 - How did you come to poetry first, as opposed to, say, fiction or non-fiction?
I actually think I came to poetry last. When I was a kid I wanted to be a painter or illustrator, and my stories were primarily the stuff of comic books and sci-fi/fantasy. I got my first taste of Modern poetry in a special honors class in high school which led to a Contemporary poetry class in college--that's when I started seriously writing poetry. But I also do non-fiction; I just don't have the confidence to publish much of my prose. Contemporary literary fiction is a foreign land and language to me, though I enjoy reading it.

3 - How long does it take to start any particular writing project? Does your writing initially come quickly, or is it a slow process? Do first drafts appear looking close to their final shape, or does your work come out of copious notes?
I'm a researcher and note-taker, but every poem dictates it's own genesis, and it's usually in the music or rhythm of the language: a line or half-line that catches my attention. Sometimes the process is quick and the end result close to "perfect" requiring little revision, sometimes I work on a poem for years trying to get it right. I love mucking around in the process stage.

4 - Where does a poem usually begin for you? Are you an author of short pieces that end up combining into a larger project, or are you working on a "book" from the very beginning?
So far it's always been the latter. I'm a sequence writer and work within the constraints of a project so have very few "one-off" poems that aren't part of some bigger over-arching book idea I'm exploring. I usually need the framework of a book project to generate the work.

5 - Are public readings part of or counter to your creative process? Are you the sort of writer who enjoys doing readings?
I love giving readings. For some of my work, it completes the creative process, like chanting a magic spell that entrances someone sitting in the audience, especially for the dramatic monologues which are meant to be performed. But my work is also very visual, so my primary concern is the connection between reader and page.

6 - Do you have any theoretical concerns behind your writing? What kinds of questions are you trying to answer with your work? What do you even think the current questions are?
At its heart the work is concerned with the intersection of the visual and the written, quite literally at the point of "the line". Beyond that, my concerns change from book to book. There's usually a healthy dose of queer and feminist (re)visioning and reclamation, often through updating myths and reinventing inherited cultural stories. Lately I've been exploring how to tell a narrative via sonic experiments in the language, what happens in the space between words that build and are bound by rhyme or assonance. I'm not afraid to traffic in esoteric knowledge and metaphysics and formal experimentation, and I know that can be demanding of a reader, but those are the readers I want, even if it limits my audience.

7 – What do you see the current role of the writer being in larger culture? Does s/he even have one? What do you think the role of the writer should be?
We always have one whether it's officially recognized or not, though I suspect we do better work when we're on the margins critiquing, questioning, observing and documenting. I worry we sometimes let the political climate overshadow good work that isn't about the times, though. When all art and critical thinking is under siege, celebrating any creative vision can be a radical act, even if the work isn't about a deplorable government and its actions. Writers have their core obsessions; pursue them despite the times and a potential readership. If you're moved to engage with what's going on out there, refract it. Be wary of substituting timely subject matter for a well crafted piece. Be cautious of stealing the magic and power of certain fashionable words through mis-/overuse.

8 - Do you find the process of working with an outside editor difficult or essential (or both)?
As a second set of eyes to help clarify a knot or someone to bounce ideas off of, essential. The editor-publishers I have working relationships with know I'm meticulous with my formatting and choices, so I've never found the process difficult.

9 - What is the best piece of advice you've heard (not necessarily given to you directly)?
Enter with (and maintain) zero expectations.

10 - How easy has it been for you to move between genres (poetry to critical prose)? What do you see as the appeal?
I don't do a lot of critical prose. The occasional book review when a book really engages me, but it's usually in the context of a poet's larger body of work. I'm far more interested in bodies of work than single collections--seeing a poet and their concerns, formal and conceptual, evolve over time. I wrote an honors thesis on Derek Walcott, so the land of critical prose isn't foreign to me; in fact the impulse of writing "the essay" (the exploration of an idea) often underpins my poems.

11 - What kind of writing routine do you tend to keep, or do you even have one? How does a typical day (for you) begin?
To be honest, a typical weekday usually begins with video games, strategic type stuff that allows my mind to wake up and ease into the day before I shower and head out to my day job. Writing routines are fluid. I used to go through sponge phases where I would soak up a lot of material, and then have a writing jag where I'd draft 20-30 pages of work in a few weeks. I'd then spend months, even years revising those pages, splicing poems together, taking ones out, adding new ones. I haven't been as prolific recently, but am quite content if I can eek out a handful of new poems annually now.

12 - When your writing gets stalled, where do you turn or return for (for lack of a better word) inspiration?
Museums, travel, and rereading my favorite books.

13 - What fragrance reminds you of home?
Wet sycamore trees after a summer thunderstorm.

14 - David W. McFadden once said that books come from books, but are there any other forms that influence your work, whether nature, music, science or visual art?
Visual art for sure (probably obvious based on my other answers), and science--there's music to be found in its language and ideas for the imagination to explore in its concepts and findings.

15 - What other writers or writings are important for your work, or simply your life outside of your work?
Comic books and graphic novels, anything from Wonder Woman (in particular Gail Simone's run on the series) to Masters of the Universe (the recent reboot/retelling of the classic She-Ra storyline via her alter ego Despara was inspired) to classics like Neil Gaiman's Sandman series. I'll pull from anywhere, though: philosophy (Plato, Irigaray), artists' own writings (Jasper Johns, Kandinsky), movies (Hedwig and the Angry Inch, anything by Almodóvar), writers' journals and letters (Sontag, Elizabeth Bishop), and all my other faves: Jeanette Winterson and Virginia Woolf, Alice Fulton and Anne Carson, Derek Walcott and Adrienne Rich, Wallace Stevens and Joe Brainard, BpNichol and H.D.

16 - What would you like to do that you haven't yet done?
Write and illustrate a comic book poem.

17 - If you could pick any other occupation to attempt, what would it be? Or, alternately, what do you think you would have ended up doing had you not been a writer?
I don't really think of my writing life as an occupation since I don't make enough money to live off it. It's more like a calling, so had I not found a home in words, I would have tried to continue to find a home in the visual arts. Sometimes I wish I had gone on to get a PhD in Art History and become a museum curator, but I like to think I channel those interests on my own terms into the creative work.

18 - What made you write, as opposed to doing something else?
When I'm writing or performing my work and in the zone, or "flow" I think they call it, I feel closest to articulating my truest and most authentic living, thinking self.

20 - What are you currently working on?
A series of poems about insects accompanied by lino cut prints; printmaking's a long lost love I've happily rediscovered and I've found the process of carving has helped revise and transform the poems. The project is inspired by Guillaume Apollinaire's Bestiary or The Parade of Orpheus where his poems are accompanied by woodcuts by Raoul Dufy.