This book is about my life and maybe also your life. And it is about the places we invent. Every story in it is absolutely true. Some of the stories are from the past and some are from the future. In the future, every child in Chicago has food and a safe place to sleep, and mothers laugh all day and eat Popsicles. Every Fourth of July there are big fireworks and no one shoots a gun, not even police because there are no police, and when you go downtown and look up at the sky, the electric arches stretch so far toward heaven that you feel like you might be the smallest and most important thing ever to be born. (“A note of introduction”) 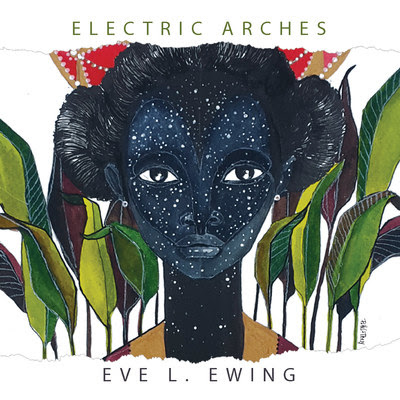 Chicago writer, scholar, artist and educator Eve L. Ewing’s debut poetry collection is Electric Arches (Chicago IL: Haymarket Books, 2017), a powerful montage of prose, sketches and lyric poems. Given the prose elements of the collection—moving between short fiction and memoir—at first I wasn’t sure why such a collection should be structured as poetry over, say, a more overt prose structure, but there is something about the use of poetry and other lyric elements that open the collection the way pure prose might not have been able to. Electric Arches includes handwritten script, short stories, memoir, images and banner-texts, moving between genre as easily as I’ve seen.

Throughout the collection are a series of “re-telling” poems, opening with a prose re-telling of a personal experience with racism that, mid-sentence, shifts into a handwritten script that alters the narrative entirely, shifting into a kind of magical dream-state, and are some of the most powerful pieces in the collection. In a recent article on Ewing and her new collection in the Chicago Reader, Aimee Levitt writes: “When she was a little girl and had nightmares, her mother would ask her to come up with an alternative ending: the monster wasn’t chasing her so he could eat her, he was trying to warn her that her shoe was untied. This was a way of learning to control the things that caused her anxiety. In a series of poems called ‘re-tellings,’ she recounts a series of potentially traumatizing events—being called ‘nigger,’ a time she saw four boys accosted by cops in Hyde Park—and imagines that instead of feeling paralyzed and helpless, she has magical powers to make things better. And so a racist woman becomes ‘possessed by a mighty and exuberant ghost-spirit’ that makes her dance, and the boys float into the air, leaving the cops grasping at their shoelaces.”

The first time [a re-telling]

I was six years old. I know I must have been six because I was on a two-wheeler bike by myself and my dad gave it to me for my sixth birthday. We lived on Fletcher. I was riding my bike up and down the block. I was allowed to go from one corner to the other by myself because that way my mom or anyone could see me if they just looked for me. The old white lady came down the block from time to time and sometimes she was nice and sometimes she was mean. She had short brown hair and small eyes. She always wore a heavy coat. This time she screamed at me. “You little nigger! You almost hit me with that bike? Go back to your nigger Jesse Jackson neighborhood! I told my mom and she told me the flying bike should only be for weekends, but okay, I could use it just this once. I ran back out and the lady was still there. I flew up on my bike and started going around her in small tight circles until she got very dizzy trying to watch me. Just as she was falling over I scooped her up with my giant net and flew her to the lake. I was going to drop her in the water but I felt bad so I left her on a rock and went home and had a paleta.

Electric Arches is a collection of black girlhood and survival, composing evocative and thoughtful poems such as “What I Talk About When / I Talk About Black Jesus,” “Note from LeBron James to LeBron James,” “what I mean when I say I’m sharpening my oyster knife,” “why you cannot touch my hair” and “one thousand and one ways to touch your own face [.]” She writes in such a way to be completely and critically aware of the space and time in which she exists, and to work to rise above the racism, ignorance and brutality she has both repeatedly witnessed and experienced. Reminiscent of recent collections by Morgan Parker [see my review of such here] and Tonya M.Foster [see my review of such here]. Eve L. Ewing and her poems are clearly a force to be reckoned with, composing declarations that see far beyond mere survival. Writing out the darkness, Electric Arches is ultimately a positive, provocative and even affirming collection.

1.
in flight from a war for my own holy self,
clinging to a steamship.

the old farmhouse one day fell in cinders
but today, first, burned into my corneas
still visible when I close my eyes.
a tangerine aura with no center.

I told them I would not fight.

2.
they mailed me from Mississippi
in a metal ice chest.

I taste salt at the sight of honeysuckle,
recalling some kind of way
the last bacon grease to touch
the back of my hand.

I danced, once
from Alabama westward
the longest cakewalk.

5.
I disguised myself as a painter in a time of artless men.

6.
I remember every note you ever wrote to me.

7.
when you pull all day from the coldest water you can find
and do not mind carrying your bicycle up the stairs,

July twilight comes so late
you might forget to end the day at all.