Un/named, she remained a presence, even if—

Cronos laughing, wrapped us tight, blankets
Yeah, she took this world too personal, they said.
Doomed battles, long shot chances, odds against
From indifference: rapture, radiance
And called him [  ], from the fair aisle, who’d stood
There were the demands for signs, yet none came
There was the applause: “then his hand crushed mine”
She would seduce one to find the other
Crash: symbols, timpani: borders, bridges
Men pushed barges, trees sunk in the river
To her knees falling when called, her hair shook
Trouble lay breathing in corners too deep
Beauty hoarded to hide from stealing
That house, those chronic angers, no healing.

Further from Vancouver poet Renée Sarojini Saklikar’s thecanadaproject, her self-proclaimed “life-long poem chronicle that includes poetry, fiction, and essays” is the chapbook THOT-J-BAP: extractions (Vancouver BC: Nomados Literary Publishers, 2017). I’m fascinated by her declaration, very early on in her publishing, that the project would be life-long, existing as an umbrella that encompasses everything she writes and publishes (other lifelong poetry projects that come to mind include bpNichol’s The Martyrology, Robert Kroetsch’s “Field Notes,” Stephen Collis’ The Barricades Project and Charles Olson’s The Maximus Poems, among so many others). The first volume of thecanadaproject appeared as the trade collection children of air india, un/authorized exhibits and interjections, (Nightwood Editions, 2013), and this new work is an excerpt from the as-yet-unpublished second volume, a work-in-progress that also included her 2016 chapbook with above/ground press: After the Battle of Kingsway, the bees— / ~ from volume 2 of thecanadaproject, The Heart of This Journey Bears All Patterns, commonly known as Thot-J-Bap, a long poem. As she describes the ongoing project in an interview over at Touch the Donkey: “And yes: although I didn’t realize it at first, after conversations about life-long poems and much rumination about chronicle-obsessions, I do conceptualize a project that encompasses all I produce/make.” She writes:

thecanadaproject https://thecanadaproject.wordpress.com/ is a life-long poem chronicle about place, identity, language. In it are many things, including published material and works in progress such as a prose poem novel, a series of essays about life from India to Canada, coast to coast as well as many sequences of poems, in part, about the places I’ve lived: Newfoundland, Nova Scotia, Northern Ontario, Northern Quebec, Montreal, Saskatchewan, and British Columbia. The project will end when I end. It is a series of fragments always asking, when does the poem begin? A way-finding text for my imagining a life-long poem chronicle came to me while at The Writer’s Studio, when a mentor referred me to an essay by Stephen Collis on his work, The Barricades Project. Yeah, after that I was hooked. And in that way that happens, then everything seemed to call out for long poem rendering, such as another important way-finding text, N.Wimmer’s translator’s note on R.Bolaño’s The Savage Detectives. 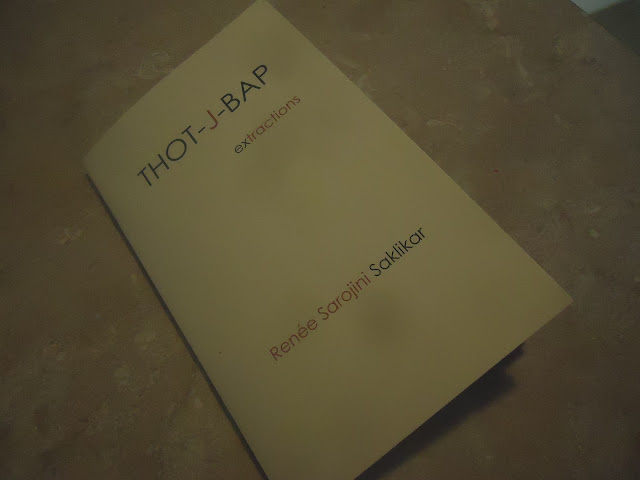 Although stretched out, portioned and fragmented, there is something akin to the work of Ontario poet Phil Hall in Saklikar’s work, in the way she appears to pick up and absorb bits of information, phrases and sentences to create a loose sequence of poems constructed in collage. Her lines bounce and stagger, staccato from bit to bit in an ambitious and expansive stretch of accumulations. Given she emerged, seemingly out of nowhere (at least for me) as the author of a first collection, I’m finding it curious to encounter the fragments of this second volume in journals and as self-contained chapbooks, unable to discern what the final shape of that book-length manuscript might be.