Elisa Gabbert, The Self Unstable

Crows can tell one human from another, but we are unable to distinguish among various crows. This is mischaracterized as a paradox. Humans may be racist, but crows can’t read, and robots can’t really dance. All species evolve toward overspecialization. If you find anything other than food or sex interesting, it’s signaling.

After reading and reviewing her third book not that long ago [see my review here], I’m finding it interesting to go through Denver, Colorado poet Elisa Gabbert’s work in reverse, currently reading her second book, the lyric essay The Self Unstable (Boston MA: Black Ocean, 2013). Composed as a sequence of stand-alone aphoristic prose sections, her prose meditations to explore, query and question, existing almost as a precursor to such as Sarah Manguso’s 300 Arguments (Graywolf, 2016) [see my review of such here]. Given I’m still working my way through the American strains of prose poetry/the lyric essay, I’d be curious to know some of Gabbert’s own influences that led to such a work. What books led her to this?

I saw a figure from a distance and thought it was me. I drank from the opposite side of a glass. If you can’t describe how you feel to yourself, you can’t be sure what you’re feeling—or that you feel at all. Consciousness as unreliable narrator. The self is a play that you watch from the audience—you affect it, but you can’t control it. 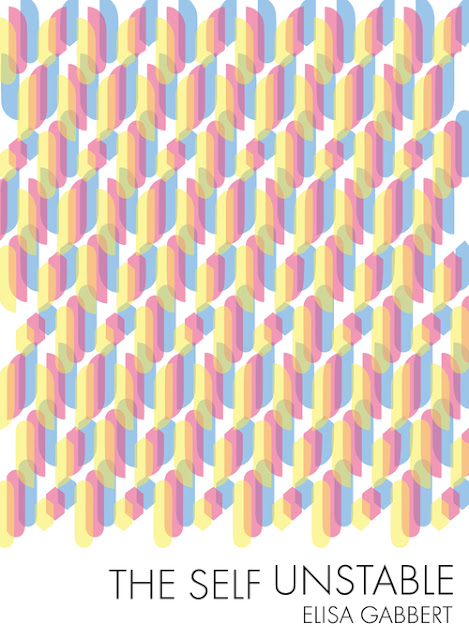 The book that emerges from her accumulations is quite fascinating, one that, in part, comes from the way the pieces in The Self Unstable are grouped, set into an opening poem and five seemingly-seemed sections: “The Self Is Unstable: Humans & Other Animals,” “Transcending the Body: Memories, Dreams, Fears, & Fantasies,” “A Crude Kind of Progress: Art & Aesthetics,” “First-Person Shooter: Games & Leisure” and “Enjoyment of Adversity: Love & Sex.” Were pieces composed as stand-alone and reordered and grouped later on, as part of the editing process? The effect really is quite stunning, and this is a book that explores the structure of plays, history and the notion of the self in a way that requires multiple readings. The poem that opens the collection asks, in a title borrowed from Wallace Shawn’s play, “The Designated Mourner” (a play she explores more fully in her third collection), “What Was the Self?” In itself, this becomes the question of the entire collection. As she writes:

What was the self?

You wanted a life of causes, but it was all effects: you could never get before.

Finding meaning in the meaningless was no kind of meaning, but you were satisfied with meaningness.

Luck is a skill, as is beauty, intelligence—all things you’re born with. It can almost ruin you, the belief that you can choose.

I watch a baby in a restaurant playing with a plastic Slinky.

The only way past is through.

There is a lot going on in this collection, and her directions are legion. Comparatively, the poems that make up her first collection, The French Exit (Birds, LLC, 2010), do exist as an intriguing and coherent collection, but the two that follow are expansive, book-length single projects, a structural shift in her work that is utterly compelling, and far deeper. It is as though that, once her first collection was completed, she shifted from writing poems to writing books. I am very interested to see where she might end up next.