WHY WAS I SMOTHERING small raccoons. Comical now, but not so under the spidery gauze of sky. We were the bodies moving below misunderstanding like lumps of saddened [damaged, weakened, wounded, lacerated, suffering, insufferable] coal. My ribs turn in their sockets, axle sideways and burst to tell it: the huge raccoon on hind legs thumping on the top of the car. What is this animal encounter, what, this animal misunderstanding. All raccoons are enemies. (They survive as well as we do.) (“The use of weapons for protection…from aggressive animals is a…morally neutral action” [Survivalcache.com].” It looked so evil when I killed it, but once it was dead I saw it was no bigger than my hand. What is this animal anger. That is the question. What, love? What if it were The Last Animal on Earth?

From California writer Eleni Sikelianos comes Make Yourself Happy (Minneapolis MN: Coffee House Press, 2017), a collection composed as a study around human cause-and-effect of environmental destruction, connecting the human pursuit of happiness (including travel, drug addiction, restaurants, therapy, self-harm and home décor) to the ongoing extinction of multiple species. As she writes to open the poem “NOT-ENTHEOGEN (ANTISTROPHE)”: “We all began to think about the end / Of the world. We thought / We would / Kill / All the Animals.” Make Yourself Happy is an incredible book-length study on our relentless and often irresponsible pursuit for human happiness, and the destructive force our species have become on the planet, eradicating species after species to such an extent as to become the architects of our own extinction. Through the title section that opens the collection, Sikelianos explores the very idea of happiness, asking what exactly happiness means, what lengths some have gone to attain it, and how destructive that endless chase, for some, has become. In a recent interview, conducted by Srikanth Reddy and posted at BOMB Magazine, Sikelianos responds:

What do we mean by self-help? I don’t know, but I do know that poetry helps me all the time, to remember and question what being human is, to feel the articulations of where it might be in space, in relation to other living and nonliving things, to the political, the whole proprioceptive range. The poetry that most draws me tends to allow me to feel what’s at stake, which is both pleasure and pain.

We resist the self-help genre because it often ignores complexities of the world-problem. If you're helping yourself, what happens to the Other? I spent many years vehemently rejecting the notion of poetry as therapy. And I still do, because above all, it’s an art. But, at its most potent, it also does make things happen—it changes the writer and the reader.

I am definitely for claiming poetry as a space that does things. I am for claiming poetry as a space for most things we think it shouldn’t or doesn't do. Poetry is contested space, and the battles about what is allowed to go in and stay out are important. For example, there’s been an anti-didactic sentiment in the so-called experimental American poetry community for a while, and I understand where it’s coming from. Maybe at our most generous we could say it’s coming from an anti-hegemonic stance. It seems cousin to the ban on epiphany, which might be linked to the late 20th-century obsession with the materiality of the poem, of which we still feel the remnants. I am for that, but I am also for allowing things to appear out of the nonmaterial world.

One of the forces behind the poems in the first section was a desire to reclaim the pleasure of the poem, the hedonistic experience of sound and light and movement as they rush through language, in that sensorial buoyancy that, for me, is singular to poetry. To celebrate and to sing. (Whitman and I share a birthday, by the way!) We are living in an era when we have to reflect a lot of darkness, when the poem needs to work through a lot of calamity. Anne Waldman has recently referred to Agamben’s notion of looking into the darkness of our times, using darkness as a generative rather than a privative space. That’s important. But I wanted to rekindle that space of joy in the poem, for myself. But then of course Hedon gatecrashes and smashes up Eden.

If poetry isn’t allowed to be self-help, how will it survive? 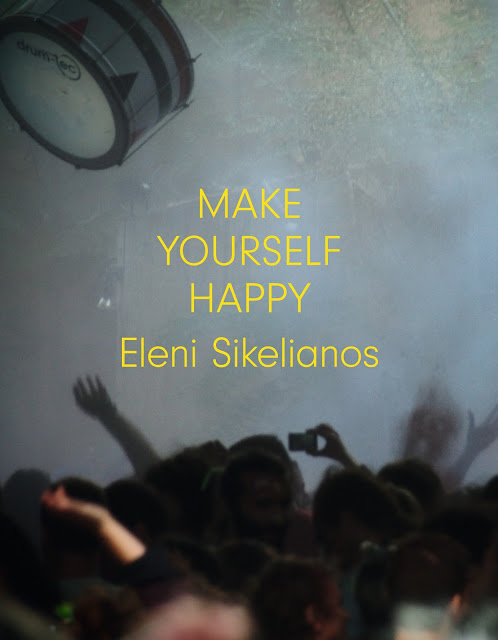 The second section, “HOW TO ASSEMBLE THE ANIMAL GLOBE” (which also includes the materials to assemble an actual physical paper globe, if one is willing to take scissors to the book), is sectioned into geographies, composing poems on now-extinct species that one populated Africa, “Islands,” Asia, Americas, Europe, “Australia/Oceania” and Antarctica. As she writes to end the poem “BUBAL HARTEBEEST,” subtitled “(ALCELAPHUS BUSELAPHUS BUSELAPHUS) / (nominate subspecies, North Africa, EX 1925?)”:

when viewed head-on, the horns
formed a U: the last captive female

Get up, you can see that the people have not respected you, get up and walk away

sings the hartebeest, according
to oral tradition

Given the thematic nature of this collection, composed as a book-length accumulation of short lyric fragments based on extensive research, there is something reminiscent of the ongoing work of American poet Cole Swensen in Sikelianos’ Make Yourself Happy. While Swensen’s works might seem exploratory in comparison, Sikelianos’ Make Yourself Happy comes with a clear and omnipresent purpose from the beginning, one that asks “how did we get here?” as well as wondering, not only where it might lead, but how long we all might have left.