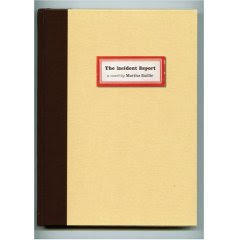 I find myself bored by most Canadian fiction these days. What is it I’m missing? Why are so many authors seemingly uninterested in the flow of how a line or a paragraph moves across the page apart from the sheer push of plot? Fortunately, I recently picked up a copy of Martha Baillie’s The Incident Report (Pedlar Press, 2009), an author as interested in language itself and how it moves as in what the story is telling.
I’ve been reading Toronto author Martha Baillie’s fiction since the publication of her first novel, My Sister Esther (Turnstone Press), following that little book up with Madame Balashovskaya's Apartment (Turnstone Press) and The Shape I Gave You (Knopf, 2006), before this newest novel, The Incident Report, out with Toronto’s Pedlar Press. What’s been going on with Knopf, that Baillie is part of a small list of authors who move from small presses up, publish one novel with Knopf, and then move back again? Maggie Helwig recently did the same, with her own post-Knopf novel published by Coach House Books. Is this simply the industry shifting around again? In her fourth novel, Baillie writes out the story of a librarian in the Toronto Public Library system, filling out reports after specific occurrences. As Baillie begins, “Many incidents occur in public libraries, and when one does the librarian in charge is required to fill out the necessary forms, including a Suspect Identification Chart.” The book starts out simply enough, working individual report after individual report, but they start to collect, pool, and even form images, stories and characters. After the repetition of reports, the accumulation begins to trace out a particular story.

At 2:20 this afternoon, the unusually pale female patron who suggested a few days ago, that I deserved to be placed in a cage, walked briskly into the library. She was clothed in blue jogging shorts and a white tennis skirt, which she wore as if it were a Roman toga, the waistband slung confidently over her right shoulder. The crisp white pleats released themselves in a fan across her chest. We did not speak. She found what she wanted without my assistance. She left, almost skipping with delight. Sunlight fell through the windows in broad swaths. A man looked up from his book and smiled.

Baillie’s use of “incident reports” reminds slightly of the structural concerns with Michael Turner’s American Whiskey Bar, or even the more recent Aaron Peck novel from Baillie’s same publisher, The Bewilderments of Bernard Willis (2008), and come together, coalesce, in the most wonderful, lovely, and even heartbreaking way. Memory is like a deck of cards, Kristjana Gunnars once wrote, each card reacting to the one that came before, and so does Baillie’s novel, working and winding its own way through the reader. Why can’t more people put books together like Martha Baillie?

The time was 11:35 PM. Janko’s full weight descended upon me, burying my belly, and my breathing slipped inside his. In the spreading sweetness my name fell from his mouth.

I agree. Really liked a lot about this book.