12 or 20 questions: with Kevin Killian 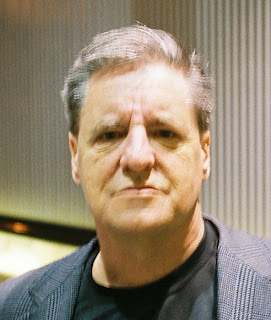 [photo credit: William E. Jones] Kevin Killian has written two novels, Shy (1989) and Arctic Summer (1997), a book of memoirs, Bedrooms Have Windows (1990), two books of stories, Little Men (1996) and I Cry Like a Baby (2001) and two books of poetry, Argento Series (2001), and Action Kylie (2008). With Lew Ellingham, Killian has written often on the life and work of the American poet Jack Spicer [1925-65] and with Peter Gizzi has edited My Vocabulary Did This To Me: The Collected Poetry of Jack Spicer (2008) for Wesleyan University Press. For the San Francisco Poets Theater Killian has written thirty plays, including Stone Marmalade (1996, with Leslie Scalapino), The American Objectivists (2001, with Brian Kim Stefans), and Often (also 2001, with Barbara Guest). New projects include Screen Tests, an edition of Killian's film writing, and Impossible Princess, a new fiction collection forthcoming from City Lights Books in 2009. A new novel Spreadeagle will appear in the spring.

My first chapbook was called “Desiree,” and when it appeared in the estimable e.g series edited by David Highsmith, I felt well and truly part of the so-called New Narrative movement then underway in San Francisco. To be a part of something is a condition to which I have always aspired --bourgeois upbringing? My more recent work has been more conceptual in nature--how that feels different--mmm, not sure, but it is less personal for sure.

I came to fiction first, but by the time I got out of high school I thought of myself as a poet. Then in grad school it was back to writing novels. Endless series of novels like Robertson Davies, only mine were basically all about how I had suffered growing up on Long Island, a well-to-do suburb of NYC.

It took me 18 years to finish my first novel, SHY. My third novel, SPREAD EAGLE, was begun in 1990 and is not finished yet. On the other hand I have written hundreds of smaller pieces pretty much on a first draft, and yet they’re nearly all of them awful. But good and bad are terms I pretty much grew out of once I moved to San Francisco, the birthplace of the provisional and the contingent.

I have done both, though for ARGENTO SERIES and ACTION KYLIE I knew from the beginning of each project that they would be booklength. Each took 8 years to write. Now I begin work on another long serial poem, this one based on Bruce Benderson’s writing on filmmaker James Bidgood, the man who made Pink Narcissus.

Public readings are just my meat. I wonder if I hadn’t overcome a crippling shyness, through the aid of alcohol. if I’d ever have written a thing? I hear myself acting out everything I right. A doctor friend told me that was the mark of the narcissist. 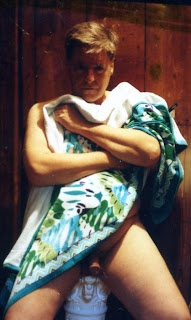 [photo credit: towel designed by Kylie Minogue, and photographed by Job Piston] 6 - Do you have any theoretical concerns behind your writing? What kinds of questions are you trying to answer with your work? What do you even think the current questions are?
Last summer, I presented at the KSW (Vancouver) “Positions colloquium,” and found myself responding spontaneously to the questions organizers posed to the panelists: “How is poetry a political field of action? What can poetry un/do? What do 'limits' mean for poetry? What are the crucial issues in taking a social (ideological) position with in a poetics today? What relationships arise between cultural production and broader social projects?”

In Fred Wah’s “adjacentcy” I find an encouraging analogue for my own policies of composition. Despite its social construction, the poem is always facing down insinuations that it lacks political efficacy, and maybe the friction I borrow from Wah can be brought to bear, like scouts rubbing sticks together, into a small fire of sorts. My own interest in the low frequency between life and death, and our continuous battle with disease, ignites as the latest “gay plague” makes mincemeat out of gay men here in the USA, a virulent strain known as MRSA producing superantigen exotoxins. For the gay men largely involved in the struggle against MRSA, what has made matters worse is the accompanying media sensationalism that has scared many of those infected from seeking treatments since, in a vicious Catch 22, gay treatment clinics are precisely the place where the bacteria strikes. And since time is of the essence in seeking treatment, even an hour’s worth of fear-derived hesitation has geometrically dangerous potential.

I work from a New Narrative poetics of shame, loss, shifting borders, humiliation and resistance—the monstrous in fact. Today figure and ground lose definition, as the diagnosis becomes the body, the body the sentence. My books Action Kylie (in girum imus nocte et consumimur igni, 2008) and Argento Series (Krupskaya, 2001), both examine the fantasies of a mass public projected across the suffering and subaltern body, and the friction that results calls up both direct political action and a strange poetic miasma, like the protoplasm you can glimpse in low-lying cemeteries on certain wintry nights by moonlight. However, poetics is a collaborative project and I look forward to finding out what you think, rob. In a weird turnabout I realize I don’t even know if you’re gay or straight or whatever.

I think it was 1991 when I realized that the writer has no role in the larger culture. Succeeding developments have only hardened this condition, but it is still something of a surprise, rather like the man who can’t remember he has now only one hand. I keep getting that shock all over again. That said, the role the writer used to play was probably socially retardataire, best left to the sweepings of history. Through accident or fate, some writers change the world, for good or ill I can’t say. Ultimately we are less harmful than movie stars.

Neither really, is that a naif thing to say? I enjoy working with editors and can be remarkably submissive all things considered, but on the other hand have done fine without an editor also. No wait, I do need an editor when I‘m writing about art.

I understand the appeal of genre, but I have never been able to keep coloring within the lines. I am sloppy, messy, and slapdash. Eileen Myles said once that they only reason they invented genre is for marketing purposes. I could never write a detective novel for example. I lack discipline and yet, I don’t believe in it much.

Well, I have a regular 9 to 5 job, so I get up early and hack about before leaving for the office. Somehow I manage to get a fair amount of something done everyday, even if it is just answering one e-mail, I don’t give up. Working people have so many more distractions than the idle, but as to who gets more work done, I couldn’t say and it’s a question that’s tormented me for 25 years.

My autograph books, my pictures by Raymond Pettibon, the back up drive to hard drive. and then things precious to my wife like her cats.

I am very drawn to visual art, to pop music and opera, to office protocols.

This is a great question. I’m lucky to have been nourished by several different communities, right from the beginning. I live in San Francisco where poetry always seems to matter; and also a site where large numbers of queer writers gather together as a culture; the “New Narrative” writers of the 70s and 80s—and the later such writers of the 90s and 00’s--remain my closest colleagues.

Make a million dollars, or whatever the currency will be this time next year.

I’m actually a secretary who writes as a hobby. And yet, if I had to start over again, I think I would have become an academic. If I didn’t know how to read or write, I would have tried becoming a psychic healer and trance medium.

I did do something else, but writing was always going to be the solution to the age-old reading problem of, there’s a gap in one’s shelf of books, and you just can’t find the missing link, you must write it yourself.

The last great book, Ugly Man by Dennis Cooper. The last great film, By Love Possessed (John Sturges, 1960) with Lana Turner, Jason Robards Junior and Efrem Zimbalist Junior. We call it, War of the Juniors. People who ooh and aah about Douglas Sirk don’t really have it together, they have ignored the absolute perfection of BLP.

Today I am writing a bit more in SPREAD EAGLE, also working on a new full-length play THE SMITH FAMILY, and writing a bit of the introduction for the forthcoming anthology of US poets theater work (1945-1985) that David Brazil and I are doing for Kenning Editions (Chicago). It’s going to be astounding, wait and see, rob!
12 or 20 questions archive (second series);
Posted by rob mclennan at 6:45 AM
Labels: 12 or 20 questions, City Lights, Kevin Killian

What an intelligent man, doing such important work with Jack Spicer's archives and his own poetry. Thanks Rob, for this interview, for the series and for all the effort you put into this kind of work.

P.S. You could have picked a better foto of Kevin. The one at the top I mean.