12 or 20 questions: with Johanna Skibsrud 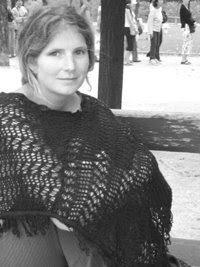 Johanna Skibsrud’s first book of poetry, Late Nights with Wild Cowboys, published by Gaspereau Press in 2008, was shortlisted for the Gerald Lampert Award. A novel, The Sentimentalists, is forthcoming in fall, 2009, and a second book of poetry in Spring 2010. Originally from Meadowville, Nova Scotia, Johanna currently lives in Montreal.

1 - How did your first book change your life? How does your most recentwork compare to your previous? How does it feel different?
I like to share my work, and after the book came out I started being able to do so more widely – I really enjoyed being invited to different reading series and poetry events in the months following publication. There’s definitely a lot going on in Canadian poetry, and it’s a tremendously supportive environment. I was really pleased to find that to be the case.
My next book, which comes out in fall 2009, is a novel, and so of course there is a big difference between the two projects. With the poetry book I could feel good about the work as a whole without feeling that each poem was perfect in itself – but because the novel needs to hold together as a single entity, I think I have felt a lot more anxiety about each different section of it.
2 - How did you come to poetry first, as opposed to, say, fiction or non-fiction?

I don’t think that I did, but it’s hard to say. I started writing both fiction and poetry as soon as I could read, and continued to do both all through my childhood. I took poetry and fiction workshops whenever I could during my years as an undergraduate and when I went on to do my Master’s at Concordia University in Creative Writing I worked on fiction for my thesis but continued to work on my poetry as well. They each offer me something completely different. Sometimes, if an idea for a poem is just not working I will realize that it’s not really a poem at all. Instead, maybe it’s just a fragment of a short story, or of a longer piece of fiction – like maybe just something a character in a story thinks about, or says. It also happens the other way. I’ll get going on something in piece of fiction that I realize I need to cut and completely re-work as a poem.

3 - How long does it take to start any particular writing project? Does your writing initially come quickly, or is it a slow process? Do first drafts appear looking close to their final shape, or does your work comeout of copious notes?

At first I write quickly. Then I agonize about every single line, for months or years. What ends up as the “final shape” is usually very different from where a project began, and, because there has often been such a long editing process, I very rarely feel completely “finished” about anything. I think I could work on a single poem forever, but a bigger part of me wants – eventually – to move on.

4 - Where does a poem or piece of fiction usually begin for you? Are youan author of short pieces that end up combining into a larger project, orare you working on a "book" from the very beginning?

When working on poetry, it is for me very much a process of working on shorter pieces that then combine into a larger project. I don’t usually have a plan for a poem at all when I sit down to write it other than a particular feeling that I had that I want to explore, or a particular line in my head that seemed to come from nowhere. Poetry for me is precisely that – that not-knowing. Seeing where, and how far, you can get with it.

Usually I enjoy readings immensely, but I wouldn’t say they are part of my creative process in that I only read things that I feel are as finished as they are going to be, or pretty near. I think readings are very important, though – first of all, they are a great way to meet other writers and hear what they are working on. It is also a great way to be tangibly reminded of the fact that the work is meant for, and is (hopefully) going out to, an audience of readers and listeners; that writing is ultimately about communication.

The big question for me always seems to have to do with that great gap between what I want to express and what I am able to. What is the distance between the brain, the heart, and the page? How can that distance be traversed? And to what purpose?

A writer, I think, is that person who is able to keep these – very general – questions in mind. I think that we live in a world with less and less space for that sort of reflection – of thinking about and questioning things. There can be, and is, of course, so many different kinds of writing, and as many different books as there are experiences – as there are thoughts in your head in a lifetime... And that’s the beauty of it, I think. I hate the idea that some people seem to have that there are or could be “too many books,” or “more writers than people who read” etc. I don’t think there are nearly enough books! There is so much more, obviously, that we need to explore – that we need to expand, and celebrate, and criticize – and there is more of it every day.

I have been incredibly lucky to have been able to work with Gaspereau Press on both my book of poetry as well as my forthcoming novel – the editing process on both books was extremely enjoyable, and an essential part to the completion of both projects. I think that an outside editor allows the project a bit of necessary breathing room. A writer will have been living so close up against something they’ve been working on for so long that they will have – in all likelihood – lost perspective on some aspects of it. A good editor can identify these blind spots.

9 - What is the best piece of advice you've heard (not necessarily givento you directly)?

One time, my father and I were listening to this NPR interview with Ray Bradbury and he was talking about a time, when he was a child, when he went to meet the electric-man at the travelling circus. The electric-man apparently put his hand on Ray Bradbury’s head and said, “Live forever!” That is the best piece of advice I have ever heard.

I tend to work on one major project at a time, but during that time I often save up ideas for other projects, and that makes it easier to feel okay about finishing a project. Switching between genres is also refreshing for me.

11 - What kind of writing routine do you tend to keep, or do you even haveone? How does a typical day (for you) begin?

I try to write in the mornings. I get up, get my coffee, and turn on the computer. Then just try to stay put until noon. I don’t ever give myself any specific project or task. If something isn’t working on a particular day, I will work on something else.

I have a lot of notes and stored up ideas that I have saved in little notebooks from various times in my life, so once in awhile I will go back to look at these books and get an idea from there. Mostly, though, I have resigned myself to the idea that the majority of those little notes that I thought at one time were so important, and perhaps the beginning of something great, will never actually get dealt with. There’s just too much.

I’m not sure I understand the question. I’d like to be the rooster from the Bremen Town Musicians. I’m terrified of being the wife from The Fisherman and his Wife, but I don’t think I will be now. I think that – as I get older – I get more easily satisfied with things.

I think probably visual art and nature are the biggest influences on my work. Finding ways to incorporate many different ways of experiencing and understanding the world into literature is important, of course, I think, and for me, the visual always seems to offer an interesting angle – it allows me to access a world which is, of course, my own, but is at the same time not my own.

I am reading a lot of American poetry right now. I went back to school last fall and am currently studying toward my PhD in English Literature at the Université de Montréal, so I am lucky that my work right now is to read. My comprehensive exams, which I will sit for next spring, are on American Literature from 1900 to the present day, and I have included a fair amount of poetry on that list. Wallace Stevens, George Oppen, and Jorie Graham are the three poets that I hope to work on for my dissertation – their poetry just continually astounds to me.

There are too many things. I wouldn’t know where to begin. Also my ideas change frequently, or I learn about new things that I didn’t even know existed and then I want to do that. I feel okay about it. I don’t feel panicked or anything, or like I have to do it all. But there is – there’s an awful lot I’d like to do.

If this is a fairly loose, in-your-dreams sort of question, I would probably end up choosing country music star – it would be hard to let the circus dream die, though. Otherwise, I have never seriously considered a profession other than writing.

I was extremely lucky in the fact that even as a young child I was encouraged to pursue my writing. My mother is an English teacher and a great lover of books, and so she was very pleased to have me take an interest in literature as well. I was always given the sense, from her, that I could succeed at whatever I chose to do, and I have never really doubted it – I am continually grateful to my mother for that.

I just read Don DeLillo’s White Noise again, and was blown away again by how he is able to be both amazingly funny and devastatingly serious at the same time. As for a movie: Waltz with Bashir, Ari Folman’s animated documentary, which I saw earlier this winter, is extraordinary, I think.