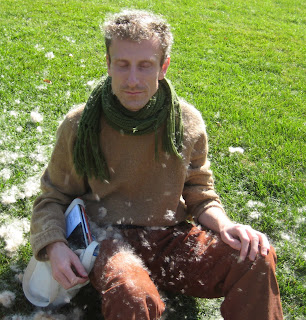 Eric Baus was born in Fort Wayne, Indiana in 1975. His publications include Tuned Droves (Octopus Books, 2009), The To Sound (Verse Press, 2004; Winner of the 2002 Verse Press, selected by Forrest Gander [see his 12 or 20 questions here]), and the chapbooks The Space Between Magnets (Diaeresis), A Swarm In The Aperture (Margin to Margin), and Something Else The Music Was (Braincase Press). He edits Minus House chapbooks, and currently lives in Denver.

My first book gave me a chance to send something to strangers whose writing I liked. Often that would spark up a conversation and sometimes a friendship. It was also nice to have random people I didn’t know contact me about the book in various ways.

My new work is still mostly prose blocks. Some of the most recent work is longer. Maybe there’s more of a sense of tonal contrast between individual pieces within manuscripts instead of having a more consistent tone throughout. I’m trying to fold in more disparate threads into the sequences I’m writing. I hope my writing is getting weirder and messier.

Probably reading the Beats in high school, then accidentally reading Artaud and Daumal because translations of their books were published by City Lights. Actually, I was reading bits and pieces of poetry, fiction, and non-fiction pretty indiscriminately at the time, but I became more and more interested in the various textures of language beyond summarizable meaning. Some of that was because I was reading writing in translation that I had absolutely no context for, so my initial engagement was to intuitively work with the surfaces of language and see what that did to my thought patterns. My understanding of reading became more about pursuing a series of cognitive experiences. When I began writing, I tried to re-create my most interesting reading experiences, and that ended up looking like some version of poetry.

My writing process is really inconsistent and varied. Sometimes things come quickly, sometimes I’ll work with a piece for years. First drafts often change entirely, almost every word, in some cases. I often write over the top of existing pieces of writing, doing cover versions or palimpsests until the source material frays and recedes.

I don’t take notes for poems because the poems don’t usually begin in an idea-based space. The ideas/themes usually come later, out of the constellations of images and sounds and processes. I do sometimes “take notes” by rehearsing certain syntactical patterns that I like.

Sometimes it comes from me listening to recordings of other poets, for example, Barbara Guest reading “An Emphasis Falls on Reality” and hearing her particular voice saying the word “pictorial.” Sometimes it comes from writing over another piece of writing. Sometimes it comes from cutting away at a larger piece of my unfinished writing until the poem is comprised of a few small gestures. Most times it’s a combination of several processes and sources. I’m interested in creating texts that eventually feel unified, so what usually happens is that I make a big mess, then start shaping the text into a skeletal narrative and/or sound pattern.

I try not to begin writing a book. I try to invite as much variation into writing for as long as possible. Then at some point, I start seeing the larger patterns as a book.

I like having the opportunity to see/create connections between poems written at different periods of time from different manuscripts. Arranging poems in different sequences for readings feels like a kind of writing.

I record myself reading practice drafts of poems in order to work with the sound patterns. I listen to a TON of recorded readings from UBUweb and PENNsound on my computer and on headphones when I’m walking around. Those habits inform my writing a lot more than the performative aspect of the experience of reading before a live audience.

I don’t have a systematic approach to theoretical concerns. They’re more like worries than coherent agendas. My current concerns are pretty practical: How to best attach language to personages/figures/pronouns/entities/animals so that there is a sense of continuity in a piece of writing, something or someone to make the language feel connected and emotionally resonant. Figuring out how to deal with some version of narrative comes up for me a lot. I’m always concerned about the effects of sequences and series.

The title of Reuven Tsur’s book “What Makes Sound Patterns Expressive?” is a pretty good question to consider.

Poetry moves in the larger culture in subtle, complex, often very delayed ways. In my experience, writing drifts somewhat away from authorial intent and the immediate literary community and has a life of its own, so I’m less invested in trying to micromanage its effect in the world. I think writing in a way that foregrounds the complexities of human relations while suggesting the possibilities for connection is a good goal.

Both times it’s been pretty minimal in terms of intervention from outside editors. I’ve been given suggestions about a few line edits, but always had the freedom to pick and choose how I wanted poems to appear. It’s been great to work with editors and artists on book and cover designs. I think of the visual appearance of a book as part of the writing itself, part of its reading atmosphere. I’ve been lucky to work with editors at both Wave and Octopus who have similar ideas and who have been willing to make books that look and feel (to me) like the poems I wrote.

I can’t think of much specific advice right now. Mostly, I look around me at writers who are doing great work and living their lives with integrity and I try to quietly steal their methods for continuing to write and stay sane.

I don’t really have a routine now. I mostly write in short patches. I tend to write late at night. I edit and mulch writing anytime I don’t want to do other kinds of work.

Watching films, rewriting old writing, taking close-up photographs of cotton-y things I find on the ground, listening to recordings on PENNsound and UBUweb, listening to things people say to me and around me, paying attention to my own physiological and psychological changes.

I am pretty unsentimental about my stuff because I’ve moved so often. I am tempted to say particular books I own, but my bookshelves are in such disarray I don’t think I could find anything specific in time. I guess I would probably have to start over from scratch. I will have to be careful around fire.

If I wasn’t allergic to lots of foods, I’d be a cook or a baker. If I wasn’t allergic to most animals, I’d work with animals in some capacity. The most likely alternate life for me would be a librarian, because it’s the only job I’ve had except for teaching that didn’t make me feel crazy at the end of the day.

I used to be interested in visual art, but it was too messy, too expensive, and I didn’t feel excited by what I made. I have had the most intense and rewarding experiences around reading, and I wanted to participate in that somehow. I wanted to figure out how to create effects in language like the writers whose work made strong impressions on me early on.

I’m writing a new manuscript with characters named Minus and Iris. There is also an entity called “the ur-mane” which keeps popping up.
12 or 20 questions archive (second series);
Posted by rob mclennan at 7:09 AM
Labels: 12 or 20 questions, Eric Baus, Octopus Books, Wave Books